In Joyce Carol Oates’s thriller, a woman on the verge of psychosis turns into a serial killer when she begins a cross-country murdering spree.

Sharon, a Las Vegas stripper known as “Starr Bright,” begins a killing spree that leads her to her estranged sister Lily’s house—where she’s welcomed with open arms. But what Lily doesn’t realize is that Sharon isn’t here to rekindle their sisterly bond…she’s hiding out as the most wanted serial killer in the country.

A woman must grapple with madness in this bloody thriller that blurs the lines between fiction and reality, and will have you begging the question: What if this happened to me?

Read on for an excerpt of Starr Bright Will Be With You Soon, and then download the book.

Starr Bright Will Be with You Soon 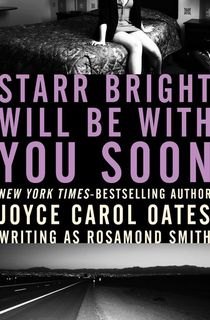 Now, no longer dancing, lacking that arena for display, “Starr Bright” was temporarily disadvantaged. And her money was rapidly running out.

Not just money for food, for necessities and a decent place to stay, but money sufficient to maintain “Starr Bright’s” cultured-classy appearance; the crucial “Starr Bright” appearance that made all the difference. For you can’t attract the attention of a worthwhile man unless you look good; and looking good, even if you’re a beautiful woman, doesn’t come cheaply.

Where had the money gone?—her money she’d earned. She’d counted $692 from the man’s wallet before tossing the wallet away in a developer’s landfill off Route 80 where no one would ever find it; $692 which should have been enough to stake her for a while, staying at the cheapest motel in Vegas she could tolerate, and mainly playing the slots which was minimal risk with the possibility of a big jackpot; in fact she’d won a $444 jackpot at Vegas World on her second night but hadn’t been able to repeat the win; believing that her luck was building up, gradually building up like steam pressure that had to explode eventually. When the slot machines disappointed, she’d tried blackjack, roulette, keno and the Nevada State lottery, praying Just this once, O Lord, and I will never ask another favor of you. And perhaps she believed this, and meant it. As years ago, when they were little girls, she’d cajoled her sister Lily into praying with her, reasoning that double prayers had double power.

One of “Starr Bright’s” problems was that if she’d been drinking she was that if she’d been drinking she was susceptible to wild mood swings. She was susceptible to behaving impulsively. Bursting into tears—tears of happiness?—when she’d won the $444 in silver coins. And later that night meeting up with a sobbing fat woman who’d lost all her money in the casinos and said she had nowhere to go and the woman’s name was Lilia (which could not have been a coincidence, could it?) and “Starr Bright” had peeled off three crisp $50 bills to press into the woman’s hand. And the woman had stared at her in disbelief, and stammered thanks, and blessed “Starr Bright” as an angel of mercy sent direct from God.

Just this once, O Lord. And I will never sin again.

Though knowing that God disapproved of gambling. Disapproved of these sinful cities of the plain, Sodom and Gomorrah. As in her innermost heart she disapproved. For hadn’t she been brought up in a devout Christian household to love God and her savior Jesus Christ above all earthly vanities; brought up to know that the wages of sin are death. But: there are times of upheaval when you have no choice except to gamble, gamble your very life, you’re desperate and run to earth and this was one of those times, He would understand, surely He would understand. A God of wrath but also a God of mercy and forgiveness.

For this was the one true fact: He was always guiding her hand.

As, that morning in October, she’d driven in the rental Infiniti from Sparks to Reno, from Reno to Vegas, how many solitary hours in the desert singing hymns at the top of her lungs she hadn’t sung in more than twenty years, singing a tune of her childhood:

“Starr Bright will be with you soon!

Starr Bright will be with you soon!

Starr Bright will be with you soon!”

Want more thrillers? Sign up for The Lineup’s newsletter!

And laughing, and talking to herself, and already she’d begun to forget; what had happened in the Paradise Motel she’d begun to forget; for forgetting is part of healing, and God’s grace is to heal. At dawn as the fiery eye emerged from the dark side of the earth she’d known that she would be guided, she would not come to harm. A wind rose out of the desert blowing dust and tumbleweed across the highway and she’d arrived in a gritty cloud obscuring the sun. Calmly locking the Infiniti with a gloved hand and tossing the keys beneath the car and walking away unobserved carrying her Gucci bag and other items, traveler’s items, through the sea of vehicles parked at the Mirage. And I saw a sea of glass mingled with fire and knew I had come to the right place. In this Sodom and Gomorrah of the desert “Starr Bright” stepped into a dream, but it was not a dream of her own, it was not a dream that depended upon her to sustain it, it was a dream already existing, in which she could hide, as a hunted creature can hide in the wilderness; she’d been in such cities before, and knew the solace of such anonymity. And in a women’s rest room at the Mirage she’d changed certain of her outer garments and fitted her beautiful red wig exactingly to her head, it was a finely woven $300 human-hair wig she’d purchased for professional reasons in Miami that had the power to change her appearance, and her personality, utterly. And so if pigs’ eyes moved onto her snagging onto her they were not eyes to capture her.

Thank you O God for this safe passage.

because already she’d forgotten so much. Because already she’d begun to heal. Like the ugly welts on her breasts and her belly and between her legs that were beginning to heal, with God’s grace. Like the bruises at the nape of her neck and at the small of her back where he’d straddled her. It was an ugly, lurid but fascinating story the Post had featured on its cover and inside front pages. How many times such had happened, and would happen. In the desert, beneath the vast empty sky into which you might fall, fall forever. A DO NOT DISTURB sign had hung outside the door of a motel room for a full day, the blinds of the room had been closed tight and the customer’s car was gone from the lot and there appeared to be no activity and at last a maid unlocked the door to discover to her horror what waited inside to be discovered. A forty-seven-year-old California man lying in a pool of congealed blood. A corpse bloodied, mutilated, naked. His throat slashed so he’d bled to death and there were multiple stab wounds in the genital area and there was blood splattered everywhere, even on the ceiling. And on the wall beside the bed in eight-inch bloody letters

The murdered man had been identified as “William Raymond Cobb of Elton, California.” His wallet and rented car, a new-model Infiniti, were missing, and Nevada State police were searching for a female companion with whom he’d registered in the motel as “Mr. & Mrs. Elton Flynn of Los Angeles.” A photograph of Cobb reprinted in the paper had not resembled anyone “Starr Bright” could recall. She was certain she’d never seen this man; she’d never seen any bloodied wall. The maid must have written those words on the wall, & the star-sign to cast suspicion onto “Starr Bright.” As in a vague, shifting dream she could remember a swimming pool filled with bright turquoise water that stank of chlorine, and she could remember a child’s plastic toy or inner tube floating in the pool; but she couldn’t remember any “William Raymond Cobb” and doubted that she had ever been in such a man’s proximity. At Kings Lake, as elsewhere, so many men had introduced themselves to “Starr Bright,” how could she remember them all? And why should she remember them all? She studied the face squinting up at her out of the cheap tabloid paper, a jowly middle-aged face, a coarse male face, a face “Starr Bright” might pity as one might pity the face of a victim of any brutal or humiliating misfortune. God, have mercy on this sinner. If You deem such a sinner worthy of Your mercy. “Starr Bright” was skeptical that, as the article claimed, Cobb had been married for twenty-two years; and was “survived by” a wife and children, a brother and a sister.

The desk clerk at the Paradise Motel told police that it had been obvious to him that “Mr. & Mrs. Flynn” hadn’t been married. As if it mattered! The man had behaved nervously and guiltily, making awkward jokes; must’ve been twenty years older than the woman; the woman was beautiful, glamorous; looked like a supermodel, or an actress, or a hooker—“but a high-class hooker.” Another witness, staying at the motel, claimed she’d seen the woman swimming in the pool, wearing a tiny yellow bikini; the woman and Cobb were swimming and splashing in the pool, drunk; later, in the cocktail lounge, the couple had been observed quarreling by several persons, including the bartender. The desk clerk described the missing woman suspect as platinum blond, approximately twenty-three years old, stylishly dressed; about five foot five, weighing maybe one hundred pounds; the bartender, who was a woman, described her as “dishwater blond” with a “coarse skin,” thirty-five at the youngest, heavily made up, five feet eight or nine and weighing possibly one hundred twenty pounds. Other witnesses recalled her seeming drugged, or drunk; as friendly and smiling; as not friendly at all but stiff, icy-cold—“Looking at you like she’d like to slit your throat.”

“Starr Bright” laughed angrily. A tower of Babel, a crowd of false witnesses, she would pay them no further heed.

But for curiosity’s sake, and as memento of her Nevada visit, she tore out the pages from the Post containing the account of William Raymond Cobb’s murder. And carefully folded them, and placed them inside the slightly tattered silk lining of her Gucci bag; with a bulky brass belt buckle wrapped in toilet paper. And she counted the cash in her possession that bright-glaring October morning: $692.

Want to keep reading? Download Starr Bright Will Be With You Soon.

Want more thrillers? Sign up for The Lineup’s newsletter!