Shut in with Spirits: A Night at Captain Grant’s 1754 Haunted Inn

On October 23, The Lineup editors took a trip to Preston, Connecticut for a night inside one of the most haunted inns in New England: Captain Grant's 1754.

On October 23, The Lineup editors, in partnership with the upcoming movie Shut In, took a trip to Preston, Connecticut for a night inside one of the most haunted inns in New England: Captain Grant’s 1754.

We—editors Jennifer, Matthew, and Aliza—settled in for what was sure to be a late night: We had planned an interview with the inn’s owner, Carol; a tour of the grounds, including the cemetery behind the property; and a ghost hunt, with Christine and Dan Peers of the Connecticut Paranormal Research Team, which we expected to go late into the night.

We also planned to set up a night vision camera in the Adelaide Room, supposedly the inn’s most haunted spot.

Our experiences were captured on Facebook Live, as well as on Dan and Christine’s cameras. While we’ve yet to receive the reviewed footage from the paranormal investigators, we can say with certainty that our time at Captain Grant’s was strange, unsettling, and altogether eerie. Here are some of our creepiest experiences from that night. 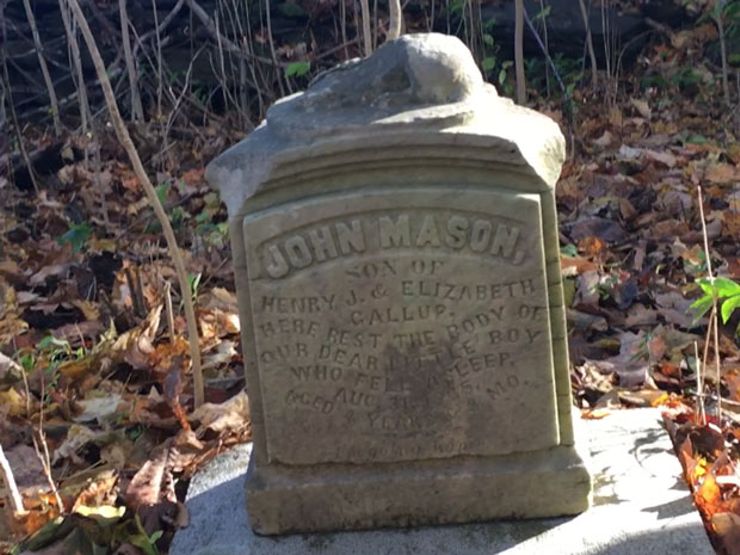 Adjacent to Captain Grant’s property lies the oldest cemetery in all of Poquetanuck Village. Dating back to the 1600s, it serves as the eternal resting places for ancestors of families who still reside in the area. We were struck by just how old this cemetery was: The majority of the people buried there lived and died in the 1700s and 1800s.

We also came across the grave of one “John Mason,” a four-year-old boy who died in 1865. “John” would come to play a crucial role in the investigation to come…

The Dining Room and Kitchen

Perhaps the most unsettling part of our paranormal investigation happened around 10:00 p.m., when we were having an EVP session in the dining room. We sat around the table with Dan and Christine, from CTPRT, as well as Karen and Steve, guests at the inn. Below the table—or so we thought—was our trusty ghost-hunting dog, Sully.

We used several pieces of gear to try and make contact with a spirit: a Raggedy Ann doll with a K2 meter inside, which we hoped would attract young spirits; a ghost box, which monitors radio waves; an EMF meter; and two amplified EVP voice recorders. We were additionally recording and streaming the investigation on Facebook Live.

As we sat around the table, Karen remembered the name on a gravestone she’d seen earlier that day: that of a young boy named John. She recalled his full name as being “John Adams,” not “John Mason,” like the gravestone we saw, but it’s entirely possible that there was a “John Adams” buried somewhere in the graveyard.

Or, perhaps, John Mason felt like playing around with us.

We decided to try and make contact with John, the child spirit, to see if his ghost was one of the many haunting Captain Grant’s Inn. Soon after we called his name, we heard a clanging noise in the kitchen, located directly off of the dining room.

We all froze. Was it John?

“If that was John, can you please make that noise again?” asked Dan. “Can you do it in the next 30 seconds?” He began counting down from 30, as the tension in the room mounted. We all sat frozen in our spots, listening as intently as we could. For the first 20 or so seconds, nothing. Then, as Dan reached the end of the countdown: “Eight, seven, six, five-“

“This moment was, without a doubt, the scariest part for me,” says Aliza. “I heard those clangs so clearly, and I was completely on edge waiting to see if we’d hear them again. I was freaked out.”

We immediately moved into the kitchen, to see if John’s spirit was, in fact, trying to contact us. Dan pointed to the refrigerator, and suggested that the sounds we heard might have been the ice machine. Then our broadcast starting breaking up, so we returned to the dining room, leaving Steve, the other inn guest, to stand guard in the kitchen. 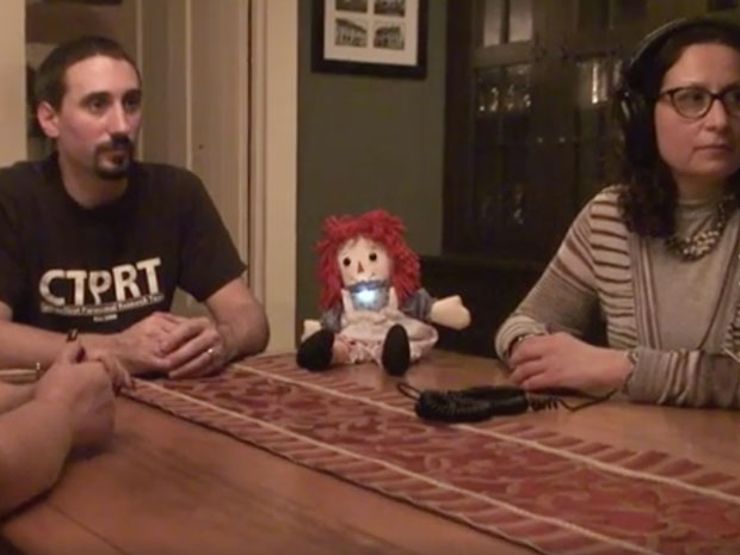 Dan from CTPRT and Karen, an inn guest who joined the investigation. Still courtesy of The Lineup.

Back at the dining room table, we decided to try and ask John directly about his identity. Jennifer and Karen both wore headphones to amplify the noise of the ghost box, so they would be listening for possible responses.

A bit of static-y, white noise, then a blip of sound.

Jennifer also heard the sound, but wasn’t as convinced as Karen that the word was in fact “Adams.”

“I felt so much tension in the room—everyone straining to hear something come through the static. It was overwhelming,” recalls Jennifer. “From the two-syllable noise we heard, I can understand why Karen said she heard Adams. But I would need to hear the EVP recording again to confirm it.”

Footsteps on the Second Floor

We continued trying to talk to “John,” when something truly spooky happened.

Throughout the investigation, we continually checked on Sully, to make sure he wasn’t wandering around, making sounds that we could accidentally attribute to paranormal activity. For the majority of the time, he was sleeping under the table.

“Can you tell us the name of the ship?” Dan asked, referring to the ship of which the infamous Captain Grant actually captained.

And then: two thuds, followed by what sounded like footsteps, coming from the second floor. Again, we all froze.

“Was that the dog?” asked Christine.

Matthew immediately checked—Sully was not in fact, under the table, and he came running back into the room soon after. Had he been crashing around upstairs?

“Sully usually stays by my side when he’s in an unfamiliar place surrounded by strangers,” says Matthew. “While possible, it would be out of character for the guy to get up, climb the stairs, and move alone down the hall to the far rooms on the second floor.”

Furthermore, all of us were convinced the thuds we heard did not match up to the sound of a four-legged animal trotting across the floor. They sounded closer to footsteps.

So, was it Sully, or was it John? We’re not entirely sure, but it set us all on edge. 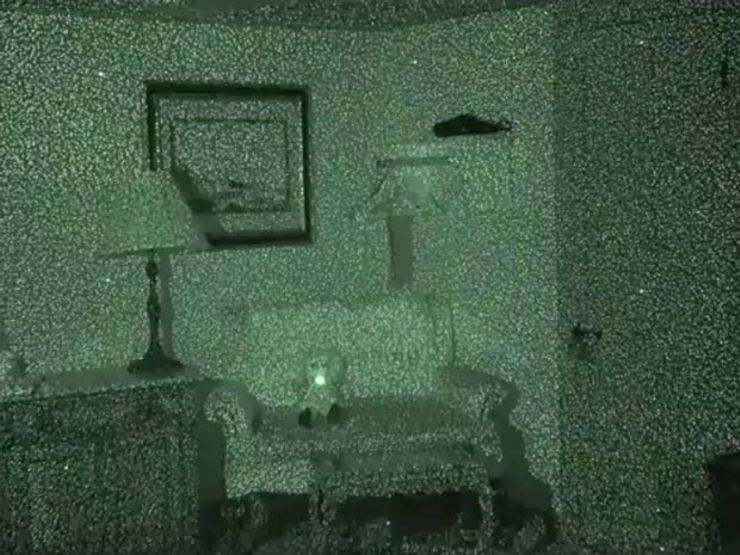 Night cam in the Adelaide Room. Still courtesy of The Lineup.

After we set up the live stream in the Adelaide Room, we retired to our respective bedrooms: Aliza in the “least” haunted Amy Room, Jennifer in the formerly most haunted Collette Room, and Matthew in the highly-active Elizabeth Room, across the hall from Adelaide.

Needless to say, no one slept very well … or very much.

Jennifer awoke around 4:30 a.m., to what sounded like little feet scampering quickly, then slowly, then quickly again, across her floor. She assumed it was just mice, but was afraid to investigate further. Then, she picked up her phone to check in on the live stream and saw a shocking image: all of us, gathered around the camera, staring into it.

It took her a moment to see that the stream had stopped and was replaying. She was actually watching the beginning of the feed, when we were setting up the camera around 11:30 p.m. She realized this, after a moment, but was initially spooked to the core, wondering if this was some malicious, ghostly trick.

“I heard Dan packing up some of his gear around 6:30 a.m., so I went downstairs and told him the stream had stopped,” says Jennifer. “When we finally opened the Adelaide Room, our camera and microphone were still running. It seemed Facebook had turned off the feed right before 4 a.m., reportedly the most active hour at Captain Grant’s.”

Matthew slept poorly, and awoke, also in the early morning hours, to the sound of thuds seemingly coming from the empty attic above.

“I heard two separate thumps between 4 and 5 a.m., one around 4:30 and the other closer to 5. It was as if something heavy had dropped to the floor. Granted, I was exhausted; it could have easily been the heat kicking on and reverberating through the house. Still, both thumps sounded as if they came from the attic. ”

“It’s funny,” Matthew recalls. “The thumps were eerie, but I didn’t feel threatened. They were almost friendly, like a familiar presence coming home. Whatever caused those noises, it did not feel menacing to me.”

Aliza, awakening around 4:00 a.m., was convinced she heard the door handle rattling. The next morning, she couldn’t recall if it was just a dream.

“Maybe, because there had been so much talk of inexplicable door-rattling, I’d been primed to hear it,” Aliza says. “But even if it was just a dream, I woke up in a cold sweat.”

In the morning light, Captain Grant’s looked as peaceful and beautiful as it did when we first arrived the day before. But everyone in our ghost hunting party was still thinking about the last 12 hours.

Karen was still sure she heard “Adams” through the Ghost Box static; Steve had thought more about the footsteps and decided they did not sound like the patter of dog paws. Jennifer and Matthew were both exhausted from little sleep; Aliza was still contemplating whether her jiggling lock had been a middle-of-the-night hallucination. Sully was the only one who seemed well rested and ready to enjoy the Connecticut fall foliage.

Though we’re still waiting on the footage taken by Dan and Christine, to confirm whether or not the sounds were heard were human, canine, or paranormal, we all left Captain Grant’s feeling uneasy. Regardless of whom or what may be haunting Captain Grant’s, our experience there was decidedly spooky.

Our hunt was brought to you in partnership with Shut In, a heart-pounding thriller starring Naomi Watts as a widowed child psychologist who lives an isolated existence in rural New England. The film hits theaters November 11th. Find out more HERE.