Candy Montgomery: The Desperate Housewife Who Murdered Her Good Friend

What really happened on that fateful Friday the 13th in 1980?

From the outside, suburban housewife Candace Montgomery (pictured, above left) was living a charmed life. Married to a successful engineer working for Texas Instruments, Candy was very active in the church. That’s where she met Betty Gore—and Allan Gore.

Candace (Candy) Montgomery enjoyed her role as a housewife, especially the cooking and decorating, and was was a devoted mother. However, after years of marriage, Candy found herself deeply bored. Candy had married Pat Montgomery in the early seventies, when he was a young, bright electrical engineer at Texas instruments. She had grown as an Army brat, constantly bouncing from base to base which lead to her easy rapport and alluring presence. Candy was confident, playful, and young, and thanks to Pat’s $70,000 income, she was living comfortably. However, the passion in her marriage was beginning to diminish which lead her to make a drastic decision before her 29th birthday… that is, to ask Allan if he would be interested in having an affair.

Though Allan was married to the mother of his two children, Betty Gore (pictured, above right), he and Candy eventually commenced their affair after months of planning. In the beginning, they agreed that if they wanted the affair to work they had to take careful precautions. They established a list of rules, including one that if either one became too emotionally involved, the affair would end. It was meant to be an adventure, purely physical. Pat was often insensitive, ushering harsh words that would escalate to arguments over nothing. Meanwhile, Allan was having marital problems with Betty, who had become distant. Between Candy and Allan's difficult marriages and their intense physical attraction, it would seem that embarking upon an affair was only a matter of time.

Later, Betty became pregnant ... and Allan decided to end the affair in order to focus on his marriage. Candy convinced Allan to one last encounter, to which Allan agreed. This mistake led to murder, on Friday, June 13, 1980. The small town of Wylie, Texas would find itself under a bright spotlight as the controversial trial made national headlines. Did Candy Montgomery kill Betty Gore in a jealous rage? Or was it actually self-defense after Betty discovered the affair?

Read on for an excerpt of Evidence of Love, by Jim Atkinson, and then download the book. 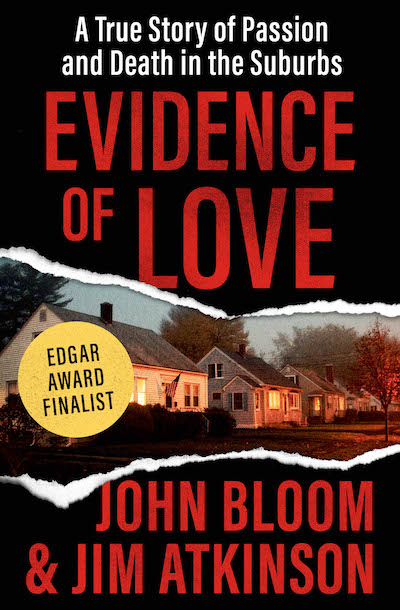 The toe on Candy’s left foot was bleeding profusely. She stared at it and fished in her purse for the keys to the station wagon.

Now you’re in the car. You’re normal. The car is still here. Everything looks the same.

Her mind went blank, and in the few lost moments, she was vaguely aware of the car beginning to move.

You can’t lose control now. Nothing is changed.

The car turned left, onto a lonely farm road that leads due west, toward the Dallas suburb of Plano. The road jogged across a railroad track and opened into an expanse of empty farmland. Weeds grew right up to the shoulder.

She glanced down at her lap and felt a sudden chill in her legs. Her blue jeans were soaked through with water. Her nostrils flooded with the antiseptic smell of fabric softener, and for a moment she thought she would be sick.

Oh God it hurts … Cut it on the storm door, that’s what happened … How can I be wet?

The car coasted past an abandoned railroad coach and a row of trailer homes and slowed to a crawl for a flashing yellow light. Then it turned abruptly right, onto a little-used blacktop that cuts through the community of Murphy, and then northwest, away from Plano, away from Lucas Church, away from Wylie, into the emptiness of the open prairie.

Two miles north of Murphy, on the right side of the asphalt road, was a long winding drive leading to a white pillared mansion. The mansion was set in the midst of an immaculate pasture encircled by horse fence. Situated along the driveway and parked at odd angles beside the main road were a dozen cars and buses. Most of their occupants were milling around with cameras, shooting pictures of a high arched gate that read “Southfork Ranch.” They had come, that day as every day, to see the exterior set where a television series is filmed, a show populated with a family of exaggerated Texas stereotypes for whom the ranch has become a symbol of failed dreams. None of the tourists noticed the old white station wagon that sped by that day. Its driver had her eyes fixed firmly on the white line of the road.

Tina was only five, but she liked to play with the bigger girls down the street whenever they would let her. Especially Alisa Gore, who was seven and lived in the brick house with the white trim and had a little baby sister. Grandma was at Tina’s house today. She let Tina go outside for a while but told her not to go very far. Tina decided to go to Alisa’s. She knew Alisa was home because of that woman. She saw her. She had blonde curly hair and blue jeans and Tina saw her come out of Alisa’s and get in her station wagon. She was in a hurry, because she drove right by Tina and she never even looked. She just drove down to the end of the block and turned and went away.

That’s what made Tina think of Alisa. She looked both ways before crossing the street, and then she went up to the front door and rang the bell on Alisa’s door. She could hear Alisa’s little baby sister crying in the house. It was real loud crying. So Tina waited a while for Alisa to come. But the baby kept crying, real loud, and nobody came to the door and Tina rang the bell again and again.

After a while Tina quit ringing the bell, and then she knocked on the door, and then she went around to the back where Alisa’s mother and father parked the cars and saw that they were still there, and then Tina went home to tell her grandmother that Alisa’s little sister was crying but Alisa wasn’t home.

No one must know.

The white station wagon wound through the Collin County back country. It pulled up to an intersection one-half mile from Lucas Church. To the right was the church. The car continued forward.

Dry and clean, you need to be dry and clean … calm now … no one must know.

The car angled up an empty, little-used road midway between the county’s two main highways. After a while it pulled back onto Farm-to-Market 1378, but far north of Lucas Church. It continued north past an old church and a red schoolhouse, across a narrow stone bridge, and up a hill. At the crest, it turned right onto a pitted gravel road that disappeared into a forest of oaks and hackberries.

On the left, across a ravine, was a large two-story Tudor home; that would be Mayor Haas’. He had a gas lamp with a wooden rabbit on it. Now the landscape was familiar again. Down a slight incline, left onto the gravel, and up the steeply inclined driveway. Only now could the house be seen from the car, sitting on a little knoll, shrouded by two or three red oaks, a contemporary cathedral-like structure in wood and glass, with the kind of stylishly unfinished look common in Colorado ski lodges. Around the expansive yard was a corral of white horse fence. The station wagon nosed into the double garage and stopped.

Nothing is changed. Out of these clothes and calm. Dry and clean. Normal.

She unlocked the door leading from the garage into the house and quickly ran upstairs, stripping off her blouse and blue jeans as she entered the master bedroom. She fumbled through shelves in the bathroom but couldn’t find what she was looking for. So she went back downstairs and into the hall bathroom and grabbed a box of Band-Aids. She put her left foot up on the commode and lowered her head down close to the third toe. She wiped the blood away and wrapped the Band-Aid as tightly as she could. She flinched as she felt how deep it was.

She retrieved her blouse and took it into the kitchen and placed it in the sink. She poured the detergent and turned on the water.

Oh no, the smell again.

She started to wretch but regained her composure quickly.

She left the blouse soaking in the sink and went upstairs to find a pair of blue jeans; she matched the shade against the ones she had just taken off and carried them into the bathroom. She took a quick shower and washed her hair. As she did, she noticed an open cut at the hairline on the right side of her forehead. She dried her hair with a towel and then went to get another Band-Aid. But the bandage wouldn’t stick. No matter how she positioned it, the springy hair around the wound kept it from adhering to the skin. Finally she gave up, wrung out her blouse, put on the new blue jeans, threw the old ones in the washer, and waited while the dryer dried her blouse.

Thank goodness it was burgundy-colored.

The last thing she did was find a pair of blue tennis shoes in the upstairs closet. She traded those for the rubber sandals and laced them up tightly to keep pressure on the toe bandage. She picked up her purse. She was ready to go to church.

On the fateful Friday, June 13, 1980, neighbors found Betty Gore’s lifeless body lying in a pool of blood. Allan, out of town for work, had called the house to check up on his wife, as they attempted to patch their marriage back together. Worried by her lack of response, Allan asked the neighbors to go over to see if Betty was alright. Neither Allan nor the neighbors expected the house to be a scene out of the slaughterhouse.

Someone had struck Betty Gore in the face with an axe over 40 times. At first, detectives suspected the killer to be an escaped mental patient, based solely on the intensity of the attack. After next ruling out Allan himself, their attention turned to the last person to see Betty alive: Candy Montgomery.

It was hard to believe that the likable and bubbly Candy was capable of such a disturbing act; moreover, no one thought the petite housewife had the physical strength to wield a heavy, three-foot-long axe. At first, Candy claimed Betty was alive when she left but then admitted that she killed Betty in self-defense.

According to Candy, an enraged Betty had discovered her husband’s extramarital affair and attempted to hit Candy with the axe. The case only gets stranger from this admission, with the twists and turns that will make your spine crawl.

Featured photo of Candy Montgomery and Betty Gore: About My Life of Crime