The author of "From Here to Eternity" discusses funerals, cremations, and other death rituals from around the world.

When you first started writing this book, was there one particular burial or funeral practice that you were excited for people to hear about, or were you just looking to experience practices you hadn’t engaged with before?

Caitlin Doughty: Well, I’ve been interested in things like Tibetan sky burial, where vultures eat the body ever since I started in the funeral industry, even though I wasn’t able to see that for the book. I think that was my first inspiration for From Here to Eternity. Then, the book really took shape around places I knew I would have special access to.

Related: 5 Must-Read Books About the Science of Death 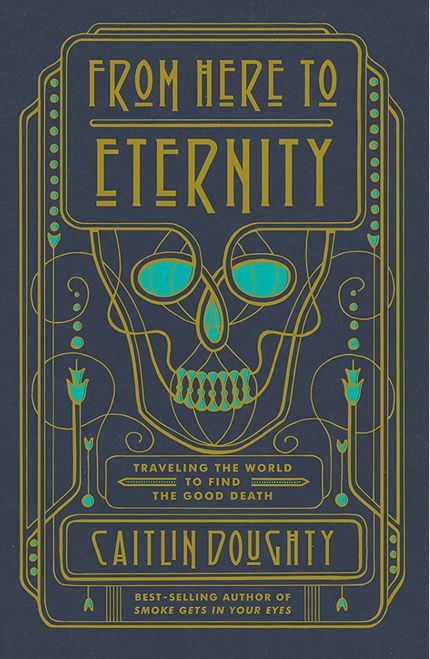 What was the first place you were able to get access to?

CD: My friend Paul Koudounaris has travelled over the world, photographing mummies and charnel houses for years and years. There was this one place in rural Indonesia that I thought I would never be able to go to and see the ritual.

One day, I’m just sitting at his house, and he says, “Oh, I’m going to Sulawesi in August. It’s going to be tough to get there, but you can come if you want.” And I was like “What? You’re going to let me come with you to Sulawesi? Yes, sign me up. I will get there with you.” It was serendipity, in that sense.

A lot of the traditions in the book seem to completely ignore Western methods, like the Sulawesi ritual you’ve mentioned. But there are some you describe, like a Buddhist temple in Japan, that manages to modernize without westernizing. Do you think there’s something specific to Japan that has made that possible?

CD: What I think is so amazing about the Japanese death system is that they manage to integrate these two things that the American funeral system can’t seem to manage at all, which is being with the dead body and technology.

The American funeral industry cannot fathom either of these things. They can’t fathom letting a family sit or be with or wash the dead body, they can’t fathom true innovation around either body disposal technology or memorialization technology.

My historical understanding of the practices in each country is that they were both shaped greatly by World War II. Obviously, the United States was the winner of that particular conflict. After the war, a huge economic boom came, and death care became keeping up with the Joneses. It became about who had the biggest casket, the most embalmed body, the most flowers, the fanciest hearses.

Whereas, Japan was on the losing end of that particular battle. So, they had to confront a different trend as far as how things developed. That was when the industry went a really different direction. The way that Japan has come to understand death today is a much more medical understanding of the dead body, but they have also really embraced technology.

I talk about multiple places in From Here to Eternity where ashes are stored in Tokyo. These places use LED lights, robots, and technology to bring people in and inspire wonder and connection with the dead. That’s something we are sorely lacking in the U.S.

The U.S. seems to be grasping at ways of connection with death and the physical world now—like the Bio-Urn, which lit up the internet a year or two ago. You mention it in the book, but you don’t seem to think it’s the solution.

CD: It is a cool idea! I think it’s been marketed in a way that is a little misleading. I don’t know if they’re intentionally being deceptive, but the narrative around it is certainly deceptive.

What would you say to people who are looking for something like the Bio-Urn to reconnect themselves in a physical way with the environment after death?

I’m not saying don’t get a cremation. More than half of the people in the U.S. now choose cremation, so you wouldn’t be alone. But I do think we shouldn’t be considering cremation to be the green option or the eco-friendly option, because that’s not really true about cremation. Cremation uses a ton of natural gas, and it puts out emissions, including mercury, into the air. If you’re looking for a green option, I would just say to be aware of that.

And the tree won’t really grow from cremation. You can mix it in with the soil in just the right way so that it might work. People treat it like it’s mulch but it’s certainly not—it’s inorganic.

Related: 9 Engrossing Books About the Science of Death

Is there some sort of separation from the body that people feel thanks to the cremation step of the Bio-Urn?

CD: There’s an amazing book called Purified by Fire, which has a quote that’s taken from the 1800s from a cremation reformer, saying that the body is going to be purified in flame or purified in fire. I think people have that perception of cremation. I think that being put into a blast furnace brings you down to clean bone, so it skips over the messy business of decomposition.

People want to skip over decomposition because it’s too threatening, but also want to be part of nature, and part of the earth. I think that’s why the Bio-Urn hits such a nerve, because people are like “well, okay, I don’t have to think about Mom decomposing, but she still becomes a tree.” You get the best of both worlds. But that’s not actually how it works. For Mom to actually nourish a tree, you’ve got to put her actual body in the ground. That has to be part of this.

Is there one thing you’d say to people who have never encountered the idea of death positivity?

CD: Death positivity is not saying that you’re supposed to be really positive that your dad died. It’s saying that it’s okay to be interested in what a cremation looks like, and what a funeral looks like, and what other cultures do with their dead, and the history of death, and the psychology of death. It’s okay to be interested in our inevitable end.

There seems to be a huge overlap in the demographics of people interested in death positivity and true crime—they’re both heavily populated by young women. Do you think that’s a coincidence, or is there a similar impulse to the interests?

CD: Yes, I think there is something there. I actually love true crime. I don’t engage with it a lot in my work or put out content about true crime, but I personally am also a big consumer of true crime.

A lot of the personal stories in the book are about parents losing children early. There’s the story of a young woman, Sarah, who had a miscarriage, and of parents whose daughter was murdered while studying abroad. Do you think being more actively engaged in the burial process that would help parents?

CD: I think that we need to let parents be with the dead body of the children. If you miscarry or you have a stillborn or a still death in a hospital, there are hospitals that will just let you stay with the child as long as you want or they’ll make it so you can take home the baby. These parents have all of this anticipation of welcoming a baby into the world, and then it’s taken from them. There’s been such positive reports of the effect of being able to cradle the child and be with it and understand that it won’t be… staying with you the same way as a living child would.

I also think it’s terrible that our specific culture struggles to allow mourning for children to be out in the open. It bums people out to have to hear about a child that died. I think that Sarah made a brilliant point when she said that the number one thing that mothers do on social media and with their friends is show their baby off. That’s why our feeds are filled with babies.

It seems like people have been pushing back against that particular reality lately.

CD: They have, but my understanding is—especially because Sarah did so much research after her child first died—there wasn’t a lot out there. It’s really just been in the last few years that, with this movement, and with young women pushing back on all of these things connected to death, that we’ve been able to see that shift.

If you could pass one law to change funeral industry standards, what would it be?

CD: There are so many I’d like to change, but the big one would be the requirements for opening a funeral home. The barrier for entry is so high. It keeps out younger women; it keeps out people of color; it keeps out immigrant groups and religious groups. If that barrier of entry were lower, you could have funeral homes that are lower cost and really serve their specific community, the way they need to be served.