As he lay dying, he muttered his last words: “I’ll never leave this accursed place.”

Philadelphia is no stranger to historical lore. The city is steeped in tales of gaslight phantoms, and its cobblestone streets whisper of days long past. Known for its importance to the American Revolution, Philadelphia contains arguably more old houses and timeworn buildings than any other place in the northeastern seaboard.

And sometimes those buildings have voices that never go away.

The Blue Bell Inn is an 18th-century, two-story tavern resting on the cusp of Southwest Philadelphia and the borough of Darby. Originally built by Henry Paschall in 1766, the Blue Bell was noted for its prominent location on Kings Highway (now called Main Street/Woodland Avenue), a popular stagecoach route into the city that sat in close proximity to Pennsylvania’s first water-driven grist mill. While traveling, George Washington and his soldiers frequented the Inn on several occasions, once on their way to the Battle of Brandywine. Some of the men reportedly stayed late into the night, prompting the Inn’s owner to cover the bar with metal rods to ensure no alcohol would be stolen while he slept.

In 1801, a third-story addition was added to the Inn, which nearly tripled its size. But over the course of the 19th century and into the 20th century, a series of floods and fires greatly damaged the structure, finally causing the addition to be torn down around 1940. Shortly afterward, yet another fire nearly destroyed the Inn completely. In 1985, the “Friends of the Blue Bell,” a collective of volunteers with an appreciation for history, came forward as the Inn’s self-appointed protectors. 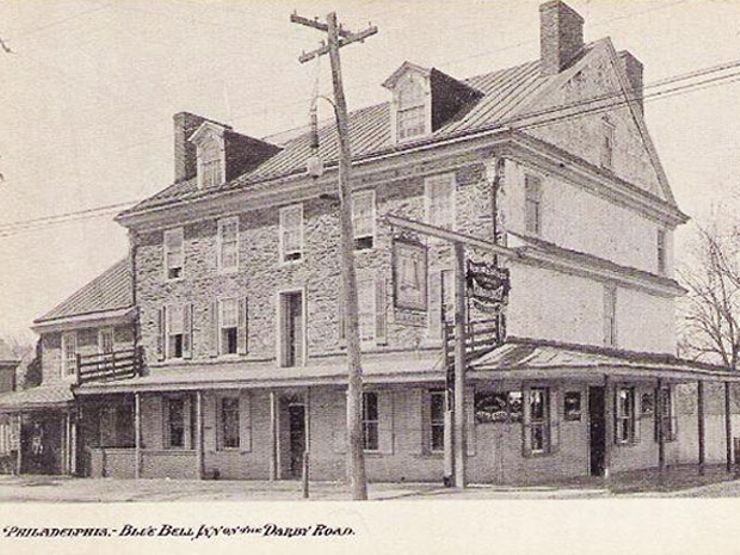 Over the ensuing years, a number of live-in caretakers managed the now-250 year old tavern. But two of them had a series of unnerving experiences they would never forget.

In the late-1990s, David Sams and his mother, June, took up residence at the Inn. They had adjusted surprisingly well to living in the cramped space, lurching forward through the narrow doorways and ducking the low arches at nearly every turn. Before long, they were settled and ready to meet the challenge of restoring the Blue Bell to its colonial glory.

One evening, June Sams stood at the top of the basement steps. Before she could begin her descent, an unseen force violently pushed her from behind, sending her plummeting downward until she came to a stop at the cement landing below. Dazed and injured, she struggled to find David, who had not heard the commotion. Assuming that his mother had simply fallen, David thought little of the incident until a few nights later.

While cooking dinner on the antique stove in the kitchen, David was overwhelmed by sense of uneasiness. A noticeable drop in temperature followed. It was mid-summer, and quite humid, which made the chill in the room evermore strange. As if beckoned involuntarily, David turned around and came face-to-face with an odd looking man. The man stared at David without blinking. His face was bony and angular; he stood tall and thin, wearing the full military regalia of another time.

Then, the man spoke.

He identified himself as Colonel Jonathan Grapin, lingered for a few seconds longer, and then disappeared into thin air. 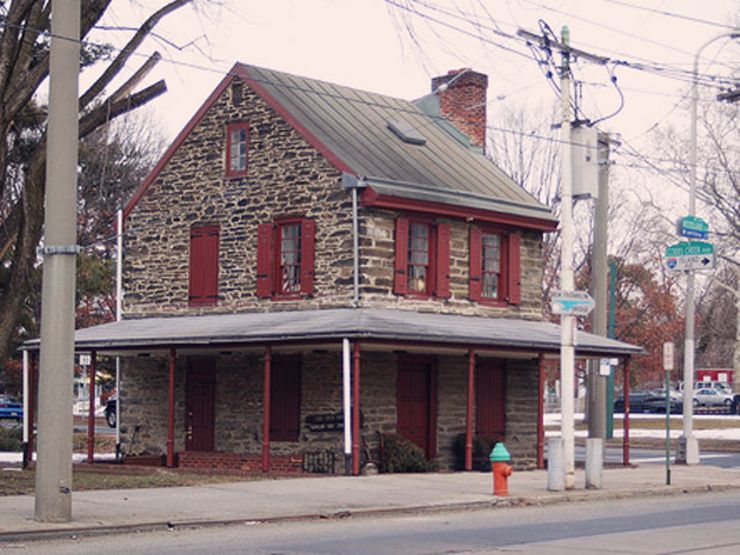 David shook for hours after the encounter. It wasn’t until weeks later that he was able to think rationally about what he had seen. With the help of local Revolutionary War enthusiasts, David began researching the history of the Blue Bell and unearthed an account of a battle that took place on the grounds in November of 1777.

As the story goes, the British had wrested control of Philadelphia, but not the Delaware River or the nearby outposts of Fort Mifflin and Fort Mercer. Because they did not control the river, British forces could not move supplies without exposing themselves to the threat of an American attack. So, they decided to take the area by force. On that day, British Army Officer Charles Cornwallis sent 2,500 troops past the Blue Bell Inn. Twenty-eight American soldiers were stationed inside. As the Redcoats marched past, it’s said that an American shot was fired from the Inn’s upstairs window, causing the British to rush through the door, bayonet five American soldiers on the stairs, and take the remaining 23 prisoners.

Related: THE GHOST WHO FOLLOWED HER HOME

In the melee, one of the British soldiers was wounded outside in the road and subsequently dragged inside. As he lay dying, he muttered his last words: “I’ll never leave this accursed place.”

David found only one source that named the dead British soldier. It read: J. Grapin.

Today, the Blue Bell Inn remains shuttered. Renovation efforts have waned in recent years, though a new tagline was recently bestowed upon the aging tavern: “The Inn at the Crossroads of History.” Unfortunately there are no tours of the historic site. However, should its splintered wooden doors open again, visitors may find themselves in the company of a tortured British soldier who refuses to let go of the Revolution.

All photos courtesy of Gary Sweeney