A Look at Fantagraphics' Bleeding Skull! A 1990s Trash-Horror Odyssey

An essential guide to the B to Z horror flicks of the 90s.

Out this month from Fantagraphics, the latest book release from Bleeding Skull—a brand dedicated to celebrating “horror and cult films from beyond the void"—is titled Bleeding Skull! A 1990s Trash-Horror Odyssey. A compendium of film reviews, this new release is the follow-up to 2013's Bleeding Skull! A 1980s Trash-Horror Odyssey. Co-written by the trio behind the Bleeding Skull site—Joseph A. Ziemba, Annie Choi, and Zach Carlson, who you may know as the editor of Destroy All Movies!!! The Complete Guide to Punks on Film!—the book covers 250 “low-budget obscurities.” The films range from “shot-on-video revelations” like Eyes of the Werewolf to “forgotten outsider-art hallucinations” such as Alien Beasts.

Speaking via Zoom with Ziemba and Choi, the first question for them had to be what the delay was, given that the book had originally been announced for a 2019 release. As Ziemba put it, their original editor at Fantagraphics left the company, so once a new editor came in, they had to start pretty much from scratch. However, the book's also been in the works since the release of the first Bleeding Skull title.

“There's always a feeling with Bleeding Skull that, once a project is done, there's another big project on the horizon,” Ziemba explains. “It's like, 'What's the next thing to do after this big one is done?' I'm always thinking about that. I just like to come up with what's next. It's what gets me really excited and starting to research and things like that. I think that there's always a couple of ideas for different kinds of books, and this one was the most obvious, because we started to get more into the '90s after the '80s book, realizing that there was so much there.”

“There's not much out there written about the '90s too, right?” responds Choi. She's right, as the book delves deeply into many filmmakers who haven't otherwise been granted a lot of work in print: the Pennsylvanian Polonia brothers, Mark and John; Kansas City's Todd Sheets; and actor/director David “The Rock” Nelson. The wide variety of filmmakers with deep catalogs mean that there is something more to this book than its predecessor. There's no holds barred when it comes to some of these reviews, with Carlson positing that actress Mary Woronov was paid “$40 and an Arby's sandwich” for her role in G.J. Levinson's 1992 film, Hellroller.

“I think if we really liked something, we really like it,” says Choi. “And if we don't like it, we explain why. I mean, we're still very sympathetic to the filmmakers and what they're trying to do, but not all movies are created equal. You can see where efforts were maybe misspent or they got caught up in something that doesn't make sense maybe, but you always see ambition. I think that's what ties all the movies together in the book: for better or for worse, they're super ambitious and passionate and did it all on their own. And that's what binds them together for sure.”

Ziemba agrees, adding, “I think Bleeding Skull always comes from a place of empathy for these films, but we also are reviewing the movies for people. If I was like 15 years old and I found a book like this, I would want to know that I shouldn't watch 5 Dark Souls, Part II, you know? 'Cause I would take all this time to like track it down and find it and then to watch it and find out, 'Oh, it's like 500 minutes of nothing?' I think that's important to me, too. Bleeding Skull's always a place for these movies to breathe and live, but we're going to be honest about them too, because we want you to have a good time. We want you to track them down and watch the ones that are going to make you happy.”

Discussing the various films which made it into A 1990s Trash-Horror Odyssey, the pair are honest about the fact that, while some directors produced hundreds of films—such as Gary Whitson with his mail-order video company, W.A.V.E. Productions, and his made-to-order productions which feel like the lewd plans of people with money to burn—they couldn't cover everything. Thus, there were certain limits.

“If it's horror, it made it in,” says Choi. “If there was a bout of bloodletting or choking or stalkerish thing, or any kind of death—W.A.V.E. generally does not have much blood in it—or anything that was totally nutso, it basically made it in the book, to a certain extent. If it was really just ladies taking off their clothes and putting on other clothes and taking off those clothes and putting on different clothes—which is 100% of the W.A.V.E catalog—but there was no bloodletting or even fake bloodletting, then that did not go in the book. That was our very strict criteria of how we went about choosing.”

Ziemba recalls the co-authors talking about choosing a W.A.V.E. movie that really represents what that company was to each of them, with Carlson picking The Mummy's Dungeon and Ziemba going for Vampire Brides.

“I remember having that conversation,” Ziemba recalls. “Like, 'We can't really write about too many of these, otherwise our brains are going to melt.' You can only watch so many W.A.V.E. movies before you can't anymore. I haven't watched a W.A.V.E. movie since working on this book, and I don't know that I will again. We'll see.”

Speaking of brain melting, one has to imagine that as the Bleeding Skull authors got down to the due date of this book, the watching may have gotten a little frenzied. Ziemba says that there are two stories here, from two very different people, who watched movies very differently. Choi concurs, and explains.

“We had a lot of movies each to watch, and I try to space them out, but I dessert first and watch all the ones I knew that were going to be incredible very early on in the process,” Choi says, a little embarrassed. “So, literally, by the time I got to the end, I hit what was essentially '90s rock bottom. It was brutal.”

One of those was the aforementioned 5 Dark Souls, Parts I and II, which combined is nearly six hours of content. Ziemba and Choi now use that film as an example of how not to review movies.

Ziemba, however, was the exact opposite.

“I'm the son of a librarian,” he says. “I was super organized, and I had my spreadsheet, and I had everything mapped out so that I could have some great stuff at the beginning, in the middle, and then end with. I think I ended with one of the David 'The Rock' Nelson ones, which was one of my favorites. I really wanted to go out on a high note.”

For those who find it harrowing going alphabetically through 250 films which run the gamut from 'B' to 'Z' grade, there are some markers to be found, thankfully, so that neophyte readers don't have to navigate this all unguided.

These categories include “Most Atrocious Band Names,” “Oh Look, Someone's Eating A Sandwich,” and the favorites from all three writers. All of these came about at the end of the writing process, as Choi was editing the book.

“Whenever we watched something that we love, we would like tell each other like, 'Oh my God, this movie was great,'” Choi explains. “And so, we have always had a mental note of which ones were great and then, as you're writing these things, or when you're watching them, there's always really funny things that happened.”

Related: How Movie Gimmicks of the 1950s Reinvigorated the Horror Genre

Cats came up as a big theme, along with funny credits and other delightful oddities and, as Choi was editing the whole thing, she noticed that the other writers had picked up on these details, so they naturally turned into lists.

Speaking of massive lists, there's the question of where Bleeding Skull is headed after this. As Ziemba noted early on, they're always looking to the next big project, and now that Bleeding Skull! A 1990s Trash-Horror Odyssey is out from Fantagraphics, one has to wonder just what's in the pipeline.

“It's not announced yet, but AGFA [the American Genre Film Archive] and Bleeding Skull are doing a Blu-ray release of a film that's in the '90s book,” Ziemba reveals. “When working on a film, I always ask the filmmaker, 'Do you have anything else maybe that we could throw on here?' This particular director said, 'Oh, I have this other whole shot-on-video horror movie that I've never shown anyone,' and I lost my mind. We're releasing that, and no one at this point in time knows that this exists except for like, two people on the planet. It's really exciting when that happens.”

Shapeshifting Hare Krishna demons who crash a BBQ, Mexican Freddy Kruegers, and two dinosaurs that dump body parts into a tiny swimming pool―brought to you by the maniacs behind Bleeding Skull!: A 1980s Trash-Horror Odyssey and Destroy All Movies!!! The Complete Guide to Punks on Film!

A celebration of the most obscure, bizarre, and brain-busting movies ever made, this film guide features 250 in-depth reviews that have escaped the radar of people with taste and the tolerance of critics—Gorgasm! I Was a Teenage Serial Killer! Satan Claus! Die Hard Dracula! Curated by the enthusiastic minds behind BleedingSkull.com, this book gets deep into gutter-level, no-budget horror, from shot-on-VHS revelations (Eyes of the Werewolf) to forgotten outsider art hallucinations (Alien Beasts). Jam-packed with rare photographs, advertisements, and VHS sleeves (most of which have never been seen before), Bleeding Skull is an edifying, laugh-out-loud guide to the dusty inventory of the greatest video store that never existed. Includes color illustrations. 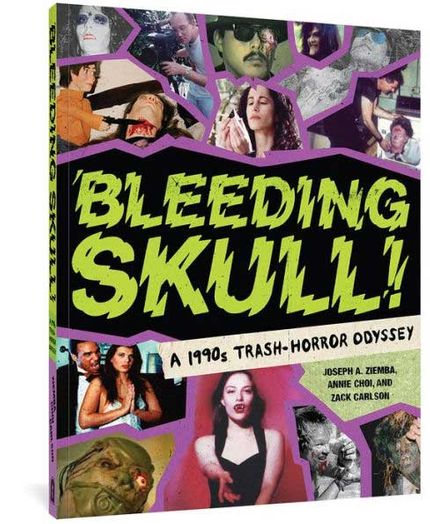