Alfred Packer: The Maneater of Colorado

This grisly tale of survival will have you grabbing an extra bag of granola next time you hit the trail.

A friendly reminder to our hikers in the audience: pack plenty of food—always. Otherwise, you just might end up like Alfred “Alferd” Packer, the Colorado cannibal.

In November of 1873, a 31-year-old Packer saddled up with prospectors for the gold fields of Colorado. The winter was especially harsh that year and after three frigid months in the wilderness the weary travelers limped into a Ute tribe camp near Montrose. The Utes were truly gracious hosts – providing ample food and shelter. They also warned against venturing any further into the mountains until spring.

Alas, such advice is hard to swallow when you have gold fever on the brain. Early one February morning, Packer and five doomed mates packed up and headed out, vanishing into the freezing foothills of the San Juan Mountains. They carried enough food for 10 measly days.

The men remained missing for two months. Then, a strangely rosy-cheeked Packer turned up alone at a saloon in Saguache. At first, Alfie claimed he had simply fallen behind, surviving on small game and roots with no idea where the others ended up. That is, until someone discovered he had all their wallets stashed in his pack.

It didn’t take long for police to pay a visit.

Parts of Packer’s story remained consistent throughout his interrogation. The men had lost their way; they ate through their provisions and were completely snowbound in the mountains. Other parts, however, changed with each telling. The group stuck together, or they separated. The men died one by one until only he remained… 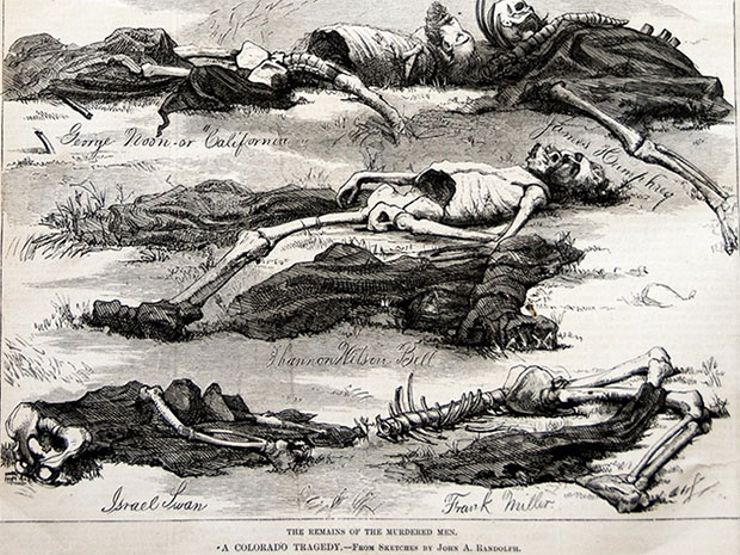 In his final telling, Packer revealed the gruesome truth: upon returning to camp one morning, he discovered fellow traveler Shannon Bell had slaughtered everyone with a hatchet. The madman was roasting their flesh over a fire. When Bell rushed forward, Packer shot him twice in the belly.

Then, he ate Bell’s body – and the slain bodies of his travelers – to survive.

Packer’s claim of self-defense failed to move the courts. Eventually, he was convicted of manslaughter and sentenced to 40 years – 8 years for each victim. According to one source, “emergency cannibalism” had become so rampant out West that the judge sought to make an example.

For his part, old Alfred stuck to his guns. He continued to plead his case via letters written to different newspapers. Ultimately, the PR campaign worked. The state released him on parole in 1901.

Packer passed away quietly in 1907. According to neighbors, the man was quite good with children; he loved to regale them with tales of his days in the mountains. In the years since his death, numerous songs and films have found inspiration in the prospector’s grisly tale – including the bizarro cult film Cannibal! The Musical from the creators of South Park. The University of Colorado even named their cafeteria after Packer. The Alferd G. Packer Memorial Grill.

Their slogan? “Have a friend for lunch!” 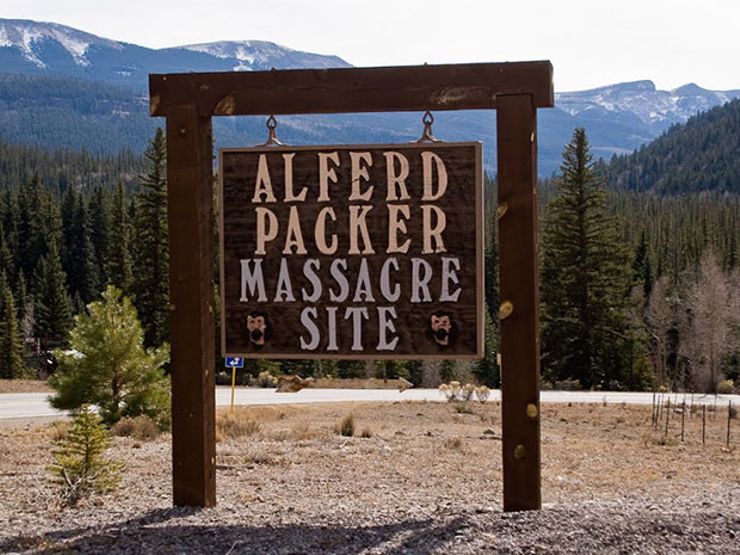 [via History and Crime Library]