In 1973, a group of prison escapees committed one of the bloodiest massacres in Georgia history.

For most people, May 14 is a day like any other. But for the residents of Donalsonville, Georgia, it’s a terrifying slice of the town's history. On that day in 1973, a group of newly-escaped prison inmates—brothers Carl and Billy Isaacs, their half-brother Wayne Coleman, and George Dungee—committed the state's bloodiest massacre since 1887.

The tale is something straight out of a horror film. Incarcerated at Maryland’s Poplar Hill Correctional Institute, 19-year-old Carl Isaacs enlisted the help of Wayne Coleman—also imprisoned at the facility—to draw up an escape plan. Carl, a vivacious fast-talker with an ego, had little difficulty swaying Coleman or George Dungee to his cause. Together, they climbed through a bathroom window, concealed themselves in the surrounding woods, stole a car, and headed South. Along the way, they picked up Carl’s younger brother, Billy.

Of course, if they had any hope of getting to Mexico or Florida, their ideal destinations, they would need money. And gas.

Just nine days after their escape and a string of robberies, the fugitives arrived at the Alday family farm. Spotting the gas pump on the property, they knew they had found their next target.

When Ned Alday and his son, Jesse, returned to their trailer to retrieve gas for their tractors, they found the Isaacs brothers, Coleman, and Dungee mid-ransack. The two were forced inside the trailer at gunpoint and then executed. One by one, as other members of the Alday family came to the trailer for gas, the fugitives took up their guns. The only member of the Alday family not immediately executed was Mary Alday, who was taken into the woods and raped before being killed. Her body would be found days later several miles away, after the Aldays' neighbors stumbled upon the crime scene.

Today, Wayne Coleman is still serving his life sentence. George Dungee died in prison and Billy Isaacs—who only got 20 years for armed robbery—passed after his release. Mastermind Carl was executed via lethal injection in 2003. The murder of the Alday family shocked and horrified the local community. The sheriff of Seminole County, where the crime took place, emphatically stated, ''If I had my way about it, I'd have me a large oven and I'd precook them for several days.'' Even then-Governor Jimmy Carter (future President of the United States) called the Alday family murders ''the most heinous crime in Georgia.''

As it turns out, two witnesses had seen Carl, Wayne, and George after they left Poplar Hill in 1973. One was Norman Strait, who spotted the trio while traveling down the interstate. To get a better view, Strait had peered through the scope of his hunting rifle, watching as they loaded various things into their stolen Thunderbird. Of the incident, Strait had said, “I guess I should have shot that son-of-a-bitch right there. It would have saved a lot of lives.”

To learn more about the gruesome Alday murders, read on for an excerpt from Blood Echoes, and then download the book. 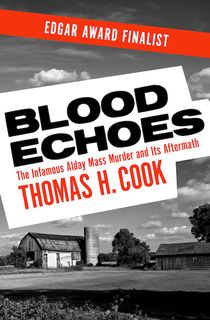 Slowly, Bud and the others got out of Bud’s truck and moved to the trailer’s back door. It was very still, the wide, recently planted fields a smooth, black slate all around them, the atmosphere utterly motionless until Jerry’s dog suddenly rushed around the corner, whimpering softly as it turned and followed them around the edge of the trailer to where they gathered at the back door.

Roy reached for the door and turned the aluminum knob slowly. It rotated smoothly. The door had not been locked. He tugged it open partially, then drew back. Bud stepped over to it, opened it a bit further, and silently peered inside.

What he saw, although innocent enough on its face, sent a wave of terror over him. It was a single Pabst Blue Ribbon beer can sitting upright on the kitchen counter, and the very sight of it stunned him nearly speechless. Because the Aldays did not drink and so never kept liquor in the house, he knew that people very different from them had found their way into Jerry Alday’s trailer, and he felt instantly that something terrible had happened to Mary, his father, his uncle, and his brothers. For Bud Alday, a beer can resting on Jerry’s kitchen cabinet was as alien and incongruous a sight as a severed head might have been, or a rock brought from the moon.

“What is it?” someone asked.

Bud did not answer. He let his eyes drift downward and saw a rumpled pair of white panties lying loosely under the kitchen table. He took a quick, shallow breath, then drew his eyes to the right, where, in the bedroom at the north end of the trailer, he could see four legs dangling motionlessly from a bed, all in farm work clothes, all dusty from the very fields that surrounded him at that moment.

He stepped back instantly and closed the door. “We got to get some help,” he said. “Something’s happened.”

The Aldays returned immediately to the homestead, where Bud called Seminole County Sheriff Dan White, and a neighbor, Hurbey Johnson.

“There’s something happened up at Jerry’s trailer, Hurbey,” Bud said. “Mary’s car is missing, and there’s a light on in the trailer. Can you meet me at Ned’s?”

“And bring a gun with you,” Bud told him.

Johnson hung up, dressed as quickly as he could, and made his way toward the front door. On the way out he picked up a twelve-gauge shotgun.

Bud was waiting in Ned and Ernestine’s driveway when Johnson pulled in.

Johnson looked at him, astonished. “Everybody? Who?”

“Everybody,” Bud answered. “Daddy and Shuggie and Chester. Jerry. Jimmy. Mary. Everybody.”

“Nobody’s heard from them since yesterday afternoon,” Bud went on, “and all the cars, the tractor, Jerry’s jeep. They’re just sitting in the driveway. Mary’s car. That’s the only thing that’s not at the trailer.”

Johnson felt his hand tighten around the shotgun. “Have you been in the trailer yet?”

Bud shook his head. “Not all the way in,” he said, unable to add anything else.

Johnson glanced around at the large assembly that had gathered in Ned’s driveway. Ernestine, Fay, and Barbara were there, their faces ghostly white in the moonlight, along with a neighbor, Eddie Chance, the long stock of a shotgun cradled in his arm.

“Roy and Andy are up at the trailer,” Bud said. “They’re watching the front and back doors in case anybody tried to come out.”

The men drove the short distance to the trailer and got out of the truck. Roy Barber and Andy Alday converged on them, their shotguns at the ready.

It was now 2:45 on the morning of May 15, 1973, and as the men advanced on the trailer, they could feel a thick and terrible dread coagulating in the air around them. In response, they fell completely silent.

“There was not a sound,” Johnson recalled, “not a word spoken. We just got out and headed toward the trailer. On the way, you could hear us racking shells into our shotguns.”

Once again, as he had done only a few minutes earlier, Bud Alday made his way to the back door of the trailer, shoved the door open, and stepped back, unable to go in.

Johnson stepped around him and headed into the trailer. To the right, he could see a beer can on the kitchen countertop. Across the room, he noticed a few items that appeared to have been scattered across the small dining room table, and which looked like the general contents of a woman’s purse, a compact, a mirror, hair brush, tube of lipstick.

His eyes drifted downward, lighting on the white panties beneath the kitchen table, then further to the right into the trailer’s north bedroom, where he saw four legs hanging off the side of the bed.

“We knew something real bad had happened in there,” Johnson recalled, “and we didn’t want to mess anything up. Roy and Andy had already took up positions to guard the back and front of the trailer. We just waited, then, for the sheriff to get there.”

Dan White pulled into the driveway five minutes later, and taking Johnson and Eddie Chance with him, moved decisively into the trailer.

What they saw during the next five minutes as they trudged from room to room inside the trailer was unimaginable.

In the bedroom to the right, just off the kitchen at the south end of the trailer, Ned and Shuggie lay facedown on the bed. Shuggie’s face was pressed deeply into the bed, while Ned’s was turned slightly to the side, revealing what appeared to be several wounds running in a jagged line down the right side of the face.

Following White, Johnson and Chance headed back through the kitchen and into the living room. On a sofa by the window, they found Jimmy Alday lying facedown, one long leg slumped off the edge of the sofa so that the left foot touched the floor.

White then proceeded back toward the far end of the trailer, while Johnson and Chance remained in the living room. They could see him standing in the doorway, staring down. “Here’s Aubrey and the other one,” he called, the only words spoken in the trailer.

By the time Sheriff White and the others made their way out of the trailer, all the missing Alday men had been accounted for.

Under other circumstances, she might have become a suspect in the murders, a distraught woman who’d suddenly snapped, shot several members of her family, and fled in her own car from the scene of the slaughter.

But then there were the panties, plain and white and lying where Mary, a very neat and very modest woman, never would have left them, crumpled and exposed beneath the kitchen table.

Wherever the killer or killers were, the men outside the trailer reasoned, if she were still alive, she was with them.