A Death in White Bear Lake: The Child Abuse Case That Led to Murder

In the early 1980s, Jerry Sherwood went looking for the newborn son she gave up for adoption 20 years prior. Sadly, the mother-son reunion was not meant to be; Jerry's child had died just before his fourth birthday.

Harold and Lois Jurgens—a middle-class, churchgoing couple who had been unable to have children of their own—had adopted Sherwood’s son, Dennis, in 1962. Tragically, just a few years after the adoption, Dennis died from peritonitis. But how did such an infection occur in the first place? Though autopsy photos showed Dennis’ body was covered in bruises at the time of his death, the coroner never declared it an accident—or rather, what it really was: murder.

Barry Siegel’s chilling true crime book, A Death in White Bear Lake, chronicles the chilling case of a family from a picturesque town in Minnesota, and the cover up of a horrific crime that lasted for 20 years. 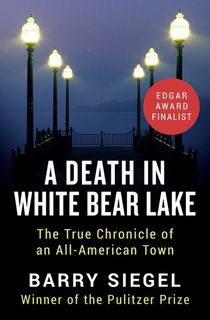 The doctor did not want to be there. Two hours before, sitting in his waterside home on the southeast shore of White Bear Lake, Sunday morning had seemed so promising. From the patio off his living room and the balcony off his bedroom, he could look across the lake to Manitou Island, and beyond, to the town of White Bear. He had lived in this home since 1953, and it gave him much pleasure. It was full of redwood and log railings, and the lawn and trees ran almost to the water’s edge, a good hundred feet of lake frontage in all. Mornings there were wonderful, but the dusk was the doctor’s favorite time, for the sun set each evening over the water and trees, falling behind Manitou Island, leaving behind a fiery orange sky.

Peterson’s house sat precisely on the site of the old Wildwood Amusement Park. The roller coaster had been just to the west of his lot, the water slide just to the east, and the dance pavilion exactly where his house now stood, the old foundation still there below his lawn and patio. The electric streetcar with overhead power lines, running as a spur off the main railroad tracks along Highway 61, would stop just three doors down. When they cleared land for his basement, they’d found old rolls of amusement park tickets—three rides for a nickel.

In winter, they got the north wind, so the lake froze too rough for ice skating. Instead, Peterson would build an ice rink on his front lawn—he’d raise a circular wood wall, lay in six inches of leaves gathered from all the neighbors for mulch, then cover that with sheet plastic, one hundred feet long, fifty feet wide, and fill it with water from the hose. When it froze, he’d hang lights on the seven surrounding elm trees, put out snow sculptures of bears and seals tinted with food coloring, and invite all the neighborhood kids to join his own two children in skating and hockey games.

In summer, Peterson caught little sunfish off his dock or from his motorboat—they had the loveliest taste, the fillet just the size of a half dollar, two good bites each. They also caught crappies and smallmouth bass and northern pike, but the sunfish were the best. From their patio, they could see huge bass jumping in the water. When the wind was up, Peterson would take out his sixteen-foot sailboat and glide toward Manitou Island and the town of White Bear.

“I think my son is dying,” Harold Jurgens had told the doctor on the phone that morning. As Peterson followed Wildwood Avenue west along the lake’s shore toward Gardenette Park, he’d rehearsed in his mind the resuscitation techniques he knew from the rescue squad. When he arrived at the Jurgens home, though, he’d realized all that was pointless. The boy was obviously dead. There’s nothing worse, Peterson had thought, than seeing a dead child. The situation had made him uncomfortable, so uncomfortable that he hadn’t pulled down the blankets or examined the body further.

"There was obviously going to be trouble, and he didn’t want to get involved."

Now VanderWyst was looking at him, asking a question: “What was the cause of death?”

The doctor’s eyes slid to a corner of the room. He couldn’t comprehend anyone torturing a kid, Peterson would explain many years later. But this death didn’t look as though it was from natural causes. There was obviously going to be trouble, and he didn’t want to get involved. It was not his job to do anything other than pronounce the boy dead.

VanderWyst didn’t push the matter. He knew Peterson as a man always willing to help others, as a doctor very much for his patients. He never wanted to say a bad word about anyone. They just weren’t going to get any damaging information from him.

Peterson departed soon after. Moments later, VanderWyst, rising to leave, asked Lois if there was anything else he could do, such as call her brother Jerome. Strange, he thought, that she hadn’t called her brother, the police lieutenant.

No, Lois said, sounding definite. If he’s notified there would be fifty people at her house, and she didn’t want that many people around.

VanderWyst climbed into his patrol car and backed down the Jurgens driveway at 11:48 A.M.

VanderWyst’s departure did not go unnoticed. Nor had his arrival two hours before. From behind their curtains and blinds, the Jurgenses’ neighbors on Gardenette Drive had been watching the comings and goings all morning with mounting interest. They saw the hearse sitting in the Jurgenses’ driveway, and a big blue convertible, and the police car parked awkwardly, askew, as if the officer had been in a hurry. At first Bob Brass thought the squad car was Lois’s brother’s, but then they saw VanderWyst in the driveway. Camille Brass knew the blue convertible belonged to Dr. Peterson. Soon the word spread from house to house—there’d been a death, the younger Jurgens boy had died. They said it was from a fall down the basement stairs.

The neighbors talked among themselves that afternoon. They felt sad, and also naggingly disturbed. After all, Dorothy Engfer more than once had seen Lois smack Dennis so hard the blood flowed from his nose, and Gladys DeMars had watched Dennis over two summers wither from a husky, jolly baby to a wan little boy covered with bruises and black eyes and split lips. Gladys and Dorothy talked frequently to each other about what they had seen, not unaware that they’d recommended the Jurgenses to the welfare department caseworker. They wanted to do something, but felt it was none of their business. Who’d listen? they figured. It would be no use. Instead, Dorothy Engfer began telling others in the neighborhood what she’d seen. She talked about it all the time, in fact. Lois was mean to Dennis—Cam Brass and Donna Neely and the others—Cam Brass and Donna Neely and the others understood that much.

A dead boy, though, was something else. How could a kid fall down the steps and die? Donna Neely wondered, as she studied the Jurgenses’ now-silent house from her front window. Our kids have fallen down steps and not died.