Most doctors are known for the lives they save. Sheppard is remembered for the life he was accused of ending.

Sometime in the early hours of July 4, 1954, Marilyn Sheppard was bludgeoned to death. The suspect? Her husband, neurosurgeon Dr. Sam Sheppard.

After being tried and convicted, Dr. Sam Sheppard sat in prison for 10 years before a judge overturned his conviction and he was given a new trial in 1966. This time, he was acquitted.

Was the first verdict right? Or did the media’s negative coverage of Sheppard during his initial trial lead to a wrongful conviction?

Read on for an excerpt from The Wrong Man, and then download the book. 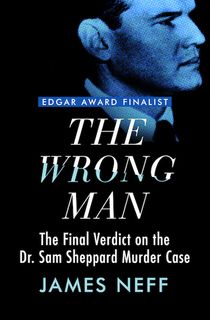 At 5:40 A.M. on July 4, 1954, the mayor of Bay Village was awakened by a telephone call. It was his neighbor Sam Sheppard, shouting, “My God, Spen, get over here quick! I think they’ve killed Marilyn!”

Spencer Houk jumped up and got dressed, waking his wife, Esther. She hated to get up early, but she knew something terrible had happened. She pulled on a dress and shoes. They lived only two houses away from Sam and Marilyn, but Spen, a butcher, had a bad knee, so they got in their car and drove to the Sheppards’ house. They didn’t stop to call the police or grab a weapon.

Sam and Spencer had become fairly good friends in the past year, even though they appeared at first glance to have little in common. Sam was a decade younger, just shy of thirty, and physically vigorous—he was always water-skiing and playing pickup basketball with the neighborhood boys. With his bad knee, exacerbated by long days on his feet cutting and selling meat to his Bay Village customers, Spen had to sit on the sidelines—except when they went fishing. Spen could outfish him any day; Sam didn’t have the patience to fish for Lake Erie perch or walleye when he could be flying across the lake on skis at thirty miles an hour. Together they had bought a thirteen-foot aluminum boat and clamped on two powerful outboard engines. Sam liked to race sports cars in amateur road rallies; now he had another grown-up toy to satisfy his need for speed.

The Houks found the Sheppards’ kitchen door unlocked. It faced Lake Road, a two-lane highway along the lake. Just inside the hallway and to the right was the den. Sam was leaning back on a red leather swivel chair, holding his neck.

“Sam, Sam, what happened?” the mayor wanted to know.

Sam was bare-chested, his pants soaked, and moaning softly, his surgeon’s fingers laced like a sling at the base of his skull.

“Pull yourself together, Sam!” Spen ordered. “What happened?”

He mumbled that he was asleep on the couch in the living room, heard Marilyn cry “Sam!” and ran up the stairs to help, and then “somebody clobbered me.”

Esther had gone right upstairs. In the northwest bedroom were twin beds. The far bed was empty, its quilt and covers neatly turned down, as if waiting for someone to quietly slide underneath. A spray of blood flecked the covers and the pillow.

A few feet away, on the bed closer to the door, Marilyn’s body lay faceup. Her legs hung over the foot of the bed, bent at the knees, her feet dangling a few inches above the rug. It was an odd position. Her legs were under a wooden bar that ran from post to post across the foot of the bed. It looked as if someone had pulled her legs under the bar, pinning her like a giant specimen. Her body was outlined by blood, a huge crimson aura. Her face was turned slightly toward the door, as if she had been expecting someone to walk in, and coated with stringy, clotting blood. She was unrecognizable. About two dozen deep, ugly crescent-shaped gashes marked her face, forehead, and scalp.

Her three-button pajama top was pushed up to her neck, baring her breasts. A blanket draped her middle. Underneath, her flimsy pajama bottoms had been removed from one leg and were bunched below the knee of her other leg, exposing her pubis.

Want more true crime books? Sign up for The Lineup’s newsletter, and get our recommended reads delivered straight to your inbox

Esther Houk steeled herself and checked Marilyn for a pulse. Nothing. She ran back downstairs and yelled to her husband, “Call the police, call the ambulance, call everybody!”

Esther poured a glass of whiskey in a kitchen glass and carried it to Sam. “You need this.”

Esther went upstairs to check. The boy’s bedroom door was open. He was sleeping, curled on his right side. From the distance, sirens wailed, grew louder and louder, then abruptly shut down.

At 5:57 A.M. Bay Village policeman Fred Drenkhan took a radio call that help was needed at 28924 Lake Road, the home of Dr. Sam Sheppard, a friend. Within a few minutes, he was inside the house. On the hallway floor he saw a black leather medical valise opened wide, standing on end, its vials and prescription pads spilled out on the wood floor.

Drenkhan found Sam in his den. On the shelves behind him were two shotguns, two small air rifles, Sam’s beloved record player, and a row of medical textbooks. Two trophies lay on the floor, broken: one of Sam’s treasured high school track trophies and Marilyn’s bowling trophy.

Drenkhan wanted to know what had happened, and Sam gave him more details. He woke up, heard his wife shout his name, then ran upstairs. On the way up, he saw a large form wearing a white top in their summer bedroom. When he reached the top of the stairs or just inside the bedroom, he was struck from behind and knocked out. After he came to, he heard a noise downstairs, ran down, saw something in the dark—a large, dark figure, probably a man—outlined against the living room windows facing the lake. He chased him out of the house, thundered down the long flight of wooden steps, caught the figure on the sand, grappled with him, and was knocked out once again. When he woke up, he was facedown at the water’s edge, his lower half in the water, his head toward the bluff. Dawn was breaking.

Fred Drenkhan, twenty-six, with only three years of police experience, didn’t know what to think. It was a puzzling story, but if Sam had been knocked out twice, he would be disoriented and perhaps give an odd account. Mostly Drenkhan enforced traffic laws in a suburb that was essentially a long, narrow strip of beachfront and nice homes, bisected by a two-lane highway, Lake Road, that connected Cleveland and Toledo. His part-time partner this weekend had never even received training, just pulled on a blue uniform a year earlier and became one of the city’s cops. Drenkhan had investigated break-ins, but never a homicide.

As the first policeman on the scene of what would rapidly metamorphose into a world-famous murder case, Drenkhan would soon find his life turned upside down.

Want more true crime books? Sign up for The Lineup’s newsletter, and get our recommended reads delivered straight to your inbox