What Making A Murderer Didn’t Tell You

Prosecutor Michael Griesbach takes on naysayers and sets the record straight as he re-examines the controversial Steven Avery case in his new book.

In 2007, Steven Avery was convicted of the murder of Teresa Halbach, a photographer, in Manitowoc County, Wisconsin.

While the trial was highly publicized, nothing could compare to the attention the case received after the release of Netflix’s 2015 documentary Making a Murderer, which showed how Manitowoc County detectives could have tampered with the evidence that led to Avery’s conviction.

Veteran Manitowoc County prosecutor, Michael Griesbach, maintains that Avery is guilty to this day—and he’s written a book to prove it.

Indefensible carefully examines each piece of evidence—like the suspicious discovery of Halbach’s car key in Avery’s home—and compares the real-life events to the documentary’s portrayal, explaining why Avery’s conviction is undeniably right.

Fans of Making a Murderer, whether they think Avery is guilty or not, will revel in the sheer detail of this book. From start to finish, Griesbach covers each controversy – and compels readers to question everything they thought they knew. 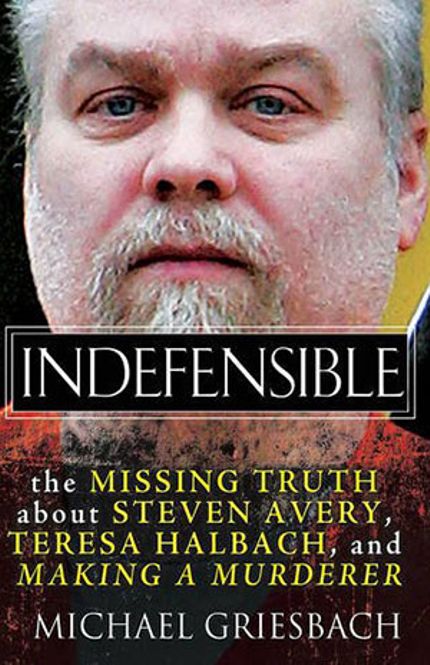 It was one of the most damning pieces of evidence in Steven Avery’s entire trial. Not literally a smoking gun, the ignition key to Teresa Halbach’s RAV4 was trumpeted as such to the jury by both sides.

But whom did it damn? The accused or his accusers?

Neither side disputed that Halbach drove her RAV4 to the Avery Salvage Yard on Halloween Day, 2005, but their opinions concerning what happened to the RAV4’s ignition key after she arrived sharply diverged.

As the prosecution would have it, Avery tucked it into the back of a small bookcase cabinet in his bedroom after he and Dassey murdered her. It was the perfect place to hide the key until he could later retrieve it, when he had the time and the opportunity to dispose of the car. With the garage door shut and the RAV4 safely hidden from view, the theory went, Avery cleaned up the blood and anything else that might have drawn suspicion, until he could dispose of the final piece of evidence linking him to the murder—the RAV4. If he had succeeded, the volunteer search party would not have discovered the RAV4, and grounds for a search warrant would have been shaky at best. Teresa Halbach’s murder might have never been solved.

Steven Avery had already chosen the method of the vehicle’s demise, went the prosecution’s theory. He would flatten it out in the “car crusher,” which, as I recall from the day I was there, was located almost as far away from his house trailer as one could get. It was about 380 feet away from where Pam Sturm and her daughter found the RAV4. With the ignition key tucked safely in the back of his cabinet, close to his bed, he would bide his time until he had the opportunity to dispose of the car. To the prosecution it all made perfect sense.

The defense cried foul, however. As luck would have it, it was Colborn and Lenk, Making a Murderer’s designated villains, who found the key. It wasn’t just bad luck; it was dumb luck, too. Had it not been for the higher-ups’ well-intended but unwise decision to allow Manitowoc County officers to participate in the search, as long as an officer from another jurisdiction accompanied them, they never would have been in Avery’s residence. And opened themselves up to charges of evidence planting.

With Steven Avery’s thirty-six-million-dollar lawsuit pending against the county and its former sheriff and DA, the sheriff’s department had a clear-cut conflict of interest.

In hindsight, it would’ve been better for both Colborn and Lenk if they had not been asked to assist in further searches, once the RAV4 was located at the salvage yard.

To make matters worse, a prior search to collect specific items in Steven Avery’s bedroom had come up empty-handed.

The gift could not have been wrapped any better for the dream team defense of Buting and Strang.

They took what in a normal case would have been a compelling piece of evidence for the state and turned it on its head. Based on how Buting described the discovery of the key, it was nearly impossible to believe it had not been planted. Here’s an excerpt from Making a Murderer:

“That key does not fall from . . . you know, in between the backboard and the frame of that little bookcase and find its way underneath a pair of slippers. Yeah, it just does…. You know, things fall straight down, thanks to gravity.”

While permitting Manitowoc County officers to participate in the searches was perhaps not the best decision, it certainly doesn’t prove Colborn and Lenk planted the key. Earlier, I had assumed they had an explanation about how they found it when previous searches came up empty-handed. After all, the jury heard all the evidence—not just the media accounts or what a pair of documentarians a decade later chose to include. They obviously must have accepted the explanation, since there’s no other way to reconcile their verdict of guilt.

I assumed it was just one more in a series of uncanny coincidences in how the investigation unfolded, but it was just that—an assumption. Conflicted out of the Avery case and with my own caseload to keep up with, I knew no more about the Avery case than what the media reported. Now, though, I aimed to find out.

Gearing up for a deep dive into the details surrounding the discovery of the key, I turned to the trial and documentary transcripts, as I did concerning Colborn calling in the plates to the RAV4, but also to the video clips in the documentary itself. After three frustrating hours of searching for the relevant portions of the transcripts and tuning into the right episode of Making a Murderer, I waded in with eyes wide open to find out whether the documentary had at least presented both sides.

Aided again by two smart, determined, and detail-oriented Redditors as obsessed with the Avery case as I was, we were able to uncover what the documentarians were up to with regard to the key. The manipulation of Colborn’s testimony regarding calling in the RAV4’s plates could not hold a candle to its distortion of how he and Lenk found the key. It was the mother of all manipulations—at least up to that point in my review of the files. Making a Murderer had once again confounded the truth.

If a picture’s worth a thousand words, then streaming video is worth more than a million. The documentarians took full advantage of their awesome power by showing close-up images of the key sticking out like a sore thumb on the floor of Steven Avery’s bedroom and an empty cabinet after the key had been found and after the cabinet had been moved and emptied of its contents. Inserting these images into the midst of carefully edited testimony of police officers fumbling on the witness stand, trying to explain themselves, it was impossible to conceive how the key could have been missed during previous searches. The documentary effectively convicted Colborn and Lenk of planting the key.

Those who knew no more about the Avery case than what the documentary chose to show them would never know this, but both Colborn and Lenk did have an explanation for how they found the key. Running contrary to the documentarians’ views, their explanations did not make the cut. Netflix viewers may or may not have been satisfied with the explanation, but they should have been given the opportunity to decide for themselves.

Still of Steven Avery in "Making A Murderer" via Netflix