For two years in Cleveland, over 100 women experienced the chilling terror of serial rapist Ronnie Shelton.

Twenty-nine victims, all women. A waitress, a wife, a next door neighbor, and so many more became the victims of serial rapist Ronnie Shelton. From 1983 to 1985, Shelton, armed with a knife and sometimes a gun, broke into homes and terrorized the West Side of Cleveland, Ohio, brutally forcing himself upon its female inhabitants. In a terrifying reign of terror, he may have raped over 100 women.

Read on for an excerpt from Unfinished Murder, and then download the book. 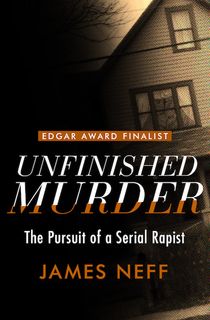 He turned back the covers and sat for a moment on the edge of a well-pounded mattress.

The young woman beside him stirred under the rumpled sheets. “What’re you doing?” she asked sleepily.

It was four in the morning. From the corner of his eye he watched her stretch, her toned muscles loose and relaxed from a night of lovemaking. He had gone out of his way to satisfy her and could tell from her responses that her previous lovers had not been very skilled in bed.

He lighted a cigarette and pulled black jeans over his slim hips.

“Gotta get some air. I’ll be back.” He knew she was annoyed at being turned down, but f—k it. He believed in playing hard to get. In his experience it made the girls want him all the more.

Besides, he had things to do before daybreak.

In the predawn dark he drove his car down West 117th Street, Cleveland’s most heavily traveled thoroughfare. He welcomed the sprinkling of traffic; it made him less conspicuous.

He told himself he was driving aimlessly, but in fact he was drawn to a block on Marne Avenue, a narrow residential street of identical bungalows.

He parked one street away and sat for a minute. He retrieved a handgun from under the front seat, tucked it in his waist, and pulled on a yellow baseball cap. He left the car and slipped down a driveway into the backyards of a group of one-story frame houses. Light-headed, staying close to shadows cast by trees against streetlights, he crept toward one of the houses.

Once there he crouched near a rear window, his mind ablaze. He had seen her before through this lighted window, tall, slim, with a strong chin and cheekbones, blond-streaked brown hair down to her shoulders. He had watched her long enough to know her patterns and those of her housemates. Now he imagined her in her bed, sleeping on her back, naked, her breasts spread across her chest. He decided to go in.

Until this moment, it had been a typical week night for Kathy Bond. She waitressed until ten at Casey’s Family Restaurant on West 117th, made about $30 in tips—more than the other waitresses, as usual—and hurried home. Her roommate, Michelle, who was divorced and owned the tiny house, had to leave soon for her midnight shift at Tony’s Diner. Kathy was going to watch Michelle’s six-year-old daughter and four-year-old son.

Kathy wanted to get married and have children someday. Over the past six months she had become close to Michelle’s kids and loved them as if they were her own. Tonight both were asleep when she arrived—Michael in the lower bunk in the children’s bedroom, and Missy, as was usual lately, in Kathy’s double bed.

After Michelle left for work, Kathy drank a beer in front of the TV, stripped to panties and a T-shirt, then moved Missy to one side of the double bed and climbed in. She fell asleep quickly and woke only when Missy began crying that her leg was asleep. Half-asleep, Kathy carried the child to her mother’s bed, where a heating pad was plugged in. She tucked in the girl, kissed her softly, and turned on the pad. Missy had only recently started complaining about her leg, and Kathy wondered whether the heating pad really helped or if Missy was simply comforted by the attention.

Kathy had been back in her own bed for a few minutes when she heard the kitchen window rattle. She listened for a minute. Silence. Must be the wind, she decided as she drifted off.

He had pulled off the screen and jimmied the window as quietly as he could. He climbed inside and froze for a minute, listening in case anyone had heard him. All right, he thought, not a peep.

This was his favorite part. The buildup. He was inside and no one knew. He took his time, wanting to figure out her life, studying the furniture and decorations and dishes in the sink. He wanted to connect with this woman he had never met.

He tiptoed to the narrow hallway, his brain awash in pleasure. She would wake up, her eyes wide, terrified, and beg him not to hurt her. She would do what he said—they always did. And she could not hurt him or his feelings, not in any way.

He checked a bedroom and saw bunk beds with rumpled covers. Kids. Good, he thought. That would make things easier. He found a little girl in another bed in another room. Then he crept into the woman’s bedroom and watched her sleep, her breathing quiet, her hair fanned on the pillow like flower petals.

Blood flooded his groin, tightening his crotch. He picked up the purse from the dresser and delicately rummaged for money. He found her tip money in a cigarette case, which also held an empty pack and her driver’s license. He turned the laminated license to catch a sliver of light from the window: Kathleen Bond, 20 years old, five-foot-eight, 124 pounds. Great face, he observed.

He pulled out the gun and moved in. “Kathy,” he said softly. “Kathy.”

She opened her eyes and an icy terror constricted her chest. She heard herself scream.

Feature photo: Ohio Department of Rehabilitation and Correction; All other photos courtesy of Open Road Media.