The community knew the clergyman as a loving husband and father, but underneath his vestment was a sex-crazed, sociopathic killer.

I first found out about serial killer Sam Smithers from a source in Tampa. She tipped me, and I investigated. Sam was married with a child and lived in Plant City, Florida, the strawberry capital of the country. He was a Baptist deacon, originally from Tennessee. Unfortunately, Sam had a violent urge that he could not control. That went along with an insatiable urge that required him to have sex multiple times, every day.

Christy Cowan and Denise Roach were prostitutes who worked Tampa’s Hillsborough Avenue. They hadn’t started out that way; no one does. Their lives were valuable, too. One day, they were there and the next, they had disappeared. When police found their bodies decomposing in a pond down a rural road, their investigation led them to a Plant City subdivision, where they looked Sam up. His house looked like your neighbor’s or mine.

Masquerading as a man of God, Sam was the serial killer next door. He had an ax and an awl that he liked to use, to mutilate and kill. But why? What made him do it? What made him so crazy? What was there in his background that turned him to the dark side? I couldn’t figure it out.

Deacon of Death was my third book about murder in Hillsborough County, Florida. Since I had worked on true-crime books Lobster Boy and The Mad Chopper there, when I showed up at the Hillsborough County Sheriff’s Office, they actually knew who I was. I met the detective who broke the case – Dorothy Flair, the first female homicide detective in the department.

An intelligent, intuitive detective, she also happened to be right out of central casting – tall, slim, raven-haired. Flair took me through the investigation. She had all these binders with her notes, documents, crime scene photos, you name it. I always say, working in Hillsborough County spoiled me. It was so wonderful working with someone so professional because it doesn’t happen all the time.

Related: Richie Diener: The Troubled Son Killed by His Own Father

For the answer to that ultimate question, she suggested I speak to Sam’s wife, Sharon Smithers. Well, you don’t just call someone up on the phone and say, “Gee, didn’t you know the guy you’re sleeping with is a serial killer?” Sure that’s the question in your mind, but I learned from Carl Bernstein that my job as a journalist was to get the best available version of the truth.

And I learned from a childhood hero, who wore a mask fashioned from his dead brother’s vest, that you do that with trust, honesty, and decency.  So when I got Sharon on the phone I told her I wanted to know how she and her son were. And I meant it. How would you like to find out that someone you love dearly was a sociopathic killer?

Soon, we got to talking about their background. Sharon and Sam had been together all their lives. Sharon opened up to me. She gave me a series of interviews, in which she spoke of their background together in Tennessee, their emigration to Florida, and why she didn’t know that her husband was leading this deadly double life.

By day, he would leave for work, she thought, at 5 a.m. Smithers worked for a utility company and also did handyman jobs. What Sharon didn’t know is on the way to and from work, he stopped on Tampa’s Hillsborough Avenue, a center of prostitution. He’d get his, then get back in the car and cruise to his destination.

Related: Deadly Greed: Charles Stuart Killed His Wife and Their Unborn Child for the Insurance Money

What Sharon did know was the big secrets in Sam’s past. It started with a parent that used a mind-bending, religious-based emotional abuse coupled with physical abuse to screw up Sam’s life before it even started. But Sam had a choice like anyone who is abused or not. He started burning things down and built up from there to murder.

In between, Sam played catch with his son. Sam loved baseball and he taught his son Jonathan how to play the game. A talented athlete, Jonathan was later part of an American criminal history first: As the son of a serial killer, he was drafted by a Major League Baseball Team, the Boston Red Sox. Unfortunately, he never got to the show. He certainly had difficult things to deal with.

Sam Smithers currently resides on Florida’s Death Row. He got death for killing Roach and Cowan. I discuss this case in an upcoming episode of Investigation Discovery’s Deadly Sins. 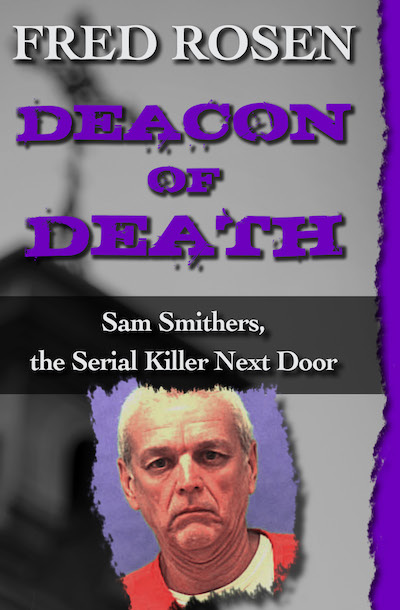 Fred Rosen, a former columnist for the Arts & Leisure section of the New York Times, is an award-winning author of true crime and history books, including Gold!, Did They Really Do It?, and Lobster Boy. He can frequently be seen on the Investigation Discovery network’s Evil Kin and Evil Twins TV series, where he is a regular on-air commentator.