Just How Easy is It to Slip Into the Darkness?

Siblings Pup and Dolly look out for each other in the wake of their mother's death. Soon, the young pair find a shared interest in witchcraft; indeed, Pup has already sold his soul to the devil. When an awful stepmother arrives in their home, Pup and Dolly decide to take their interest in the dark arts to a whole new level.

Across town, on the other side of the tracks, lives a paranoid recluse with an interest in knives. Authorities suspect he's behind a series of cold-blooded murders. When his path crosses with Pup and Dolly, the result is utter chaos as all three are pulled deeper and deeper into their dark ways.

Just one of Ruth Rendell’s many suspenseful novels, The Killing Doll will show just how easy it is for ordinary people to commit terrible evils.

Read on for an excerpt from The Killing Doll, and then download the book. 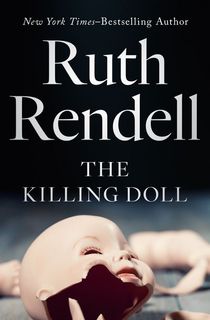 One hundred and four people passed through the tunnel before the fateful one. Diarmit counted them. Three or four a day they came, occasionally more, and he had been stationed behind his barricade for twenty-three days before the attack came on the twenty-fourth.

By then he was becalmed in a false security. Huge though they were, they kept to the center of the tunnel and he was just outside the range of their sweeping strides and great stamping feet. But the girl on the twenty-fourth day left the path and came juggernauting towards the mattress. She was in search of something, he thought in his terror, the roll of wire perhaps or the wooden cask or the old chair with which, through the weeks, he had bolstered his fortifications. Her head reached the roof, and her great flailing arms, swinging above the mattress, made a gale in the air. He jumped up in his fear, though he knew himself too small and too faint in substance to be seen, but he jumped up with a spurt of courage, a knife in each tiny feeble hand to defend himself.

The sound she made was a screaming roar of fury. He almost quailed at that, he almost yielded. It was as much as he could do to keep on his feet, not to shrivel into the ground and scuttle, certain prey for her foot. But he remained there with unflinching bravery, stabbing his sting at her, his double sting, pounding into that vast threatening mass, until the weight of it subsided, sinking on to him, a bloodied hulk.

He had done it, he had won. He struggled free. He stepped back, gasping, looking at the thing at his feet as a knight might have looked at a slain dragon. His hands were red and sticky with blood. In death his attacker had shrunk rapidly. Her body was no bigger than an ordinary girl’s now, a small young girl. Diarmit marveled that such things might be, that courage and defiance might reduce a powerful aggressor to this little dead thing.

Perhaps he should reduce it more. After all, he knew all about dismemberment. Wishing he had a saw, he got to work with the cleaver, then the knives. He abandoned the task because he got tired and, as he heard in the distance by the chiming church clock, it was 5:00 now and safe to go home.

The sunshine felt as strong as at noon. A warm curtain of it met him as he came out of the tunnel mouth, carrying the hatchet and the knives in his Harrods bag. The buddleias and willow herb and marguerite daisies were thronged with bees, a white butterfly pursued its waving, fluttering flight, and a ginger cat walked along the edge of the old station platform, but he met no one and passed no one until he had gone up the steps and was in Mount Pleasant Gardens.

Although he was covered with blood, the splashes and great soaked areas did not look like bloodstains on the red shirt and the red cords. In any case, no one looked at him, he remained invisible. On the demolition site beyond the green the workmen had knocked off for the day and the dust had settled. There was very little left of the houses; there were only bricks and rubble and an empty site. Diarmit went upstairs, up and up and up to his top floor. There was one bathroom for all the rooms on the top and in the mornings and the evenings it was always occupied but it was empty now. He took the cleaver and the knives out of the Harrods bag and washed them under cold running water. Then he turned the bag inside out and washed that.

In his room he felt more safe and sound than he had done for a long time. He made himself a pot of tea and sat drinking it by the open window. The Dalmatian and the collie lay on the grass, sleeping in the sunshine. How good it would be if Conal Moore were to come now! Diarmit felt somehow that his existence, his selfhood, was seeping back; first, the act of defense in the tunnel, then the warm sun, then the tea—all this was bringing him out of limbo, out of nothingness. Conal would see him, know him, he felt sure of that. Kathleen would know him if he went to her door now. The brave stand and the shed blood had made him recognizable, solid, whole.

I kill, therefore I am.

Want more psychological thrillers? Sign up for The Lineup's newsletter and get scary good stories delivered straight to your inbox.

It was not until the next day that the woman with the Pyrenean mountain dog found the girl’s body and not until two days after that that Diarmit knew it had been found. He saw a newspaper which someone had left on top of a pile of them on a dustbin in the side entrance. The photograph was of that face which, hugely enlarged and violently colored, had loomed over him in the tunnel and had let out those terrible sounds. He sat on a bench on the green and deciphered the headlines, then the text, working very slowly and moving his forefinger along the lines of print.

It was then that he understood they were calling him a murderer. “The Headsman,” they called him.

That was like calling a soldier in a war a murderer! If anyone came and asked him why, he had his explanation ready. You see how you would feel, driven out of the only home you’ve got by a threat of being buried under tons of rubble, only allowed home during the hours of darkness, forced to take shelter out of doors and barricade yourself in lest the stampeding hordes trample you. You try it and see how you’d feel when a huge scavenger threatens to crush you. You’d lash back with all your poor little strength, wouldn’t you? If you had the nerve, if you were brave enough.

They had not worked on the site the day before and no workmen had appeared today. Diarmit sat on the bench and watched the site and the house where his room was. The weather was still warm and sunny and the stains on his clothes began to give off a hot fetid reek. The Dalmatian came and sniffed at him. A woman, passing, pushing a bicycle, wrinkled her nose, stared at him and turned away. These evidences of his existence pleased Diarmit, but after a time the dogs annoyed him, the Dalmatian and the collie had been joined by a rough-haired mongrel, and all three sniffed him and followed him. They followed him to the door of the shop where he bought his bread and milk and teabags and they followed him back across the green to his doorstep.

Diarmit took off his clothes for the first time for many weeks and washed them in the bathroom, using Camay soap for he had nothing else. It was Sunday tomorrow and he could stay in. No demolition was ever done on a Sunday. His clothes dry—he had spread them over the window sill and closed the sash on them—he put them on and watched for Conal. A strong presentiment told him Conal would come back today but the hours passed and still no Conal and the sun departed in a long, slow sunset, followed by a long, smoky-violet dusk, and he had not come. When it was dark Diarmit tore up the note and the postcard and flushed the pieces down the lavatory in the bathroom.

Next morning he was dressed and ready to leave when there came a sharp knocking on the room door. That would be the men come to tell him they were about to begin demolishing the house. They could see him now, they could be aware of him, he had a real existence. He opened the door.

Outside on the landing, in plainclothes, were two policemen.

Want more psychological thrillers? Sign up for The Lineup's newsletter and get scary good stories delivered straight to your inbox.