Katie Shaw's blossoming world was wrecked once... can she survive the horrors again?

At age 17, Katie Shaw is ready to step off the precipice into a more adult life—one that means making her own decisions and living life boldly. But the very first time she chooses differently than her parents would expect, horror strikes.

Her younger brother, Chris, is targeted by a serial killer while Katie is off spending a stolen hour with her boyfriend. Although Chris manages to survive, he’s left with horrific physical and mental scars.

Years later, Katie is married with a kid of her own. The shape of her life has been irrevocably changed by the attack on Chris, and she is deeply protective of her young child. But when a detective realizes that a recent case has the same hallmarks as the attempted murder of Chris, Katie is pulled back into the terror she’s always wished she could leave behind…

The Angel Maker is the latest chilling tale from Alex North and we’re thrilled to be including it in the October/November Creepy Crate, ahead of its February 2023 release!

Read on for an excerpt of The Angel Maker, then subscribe to Creepy Crate for your chance to receive a copy! 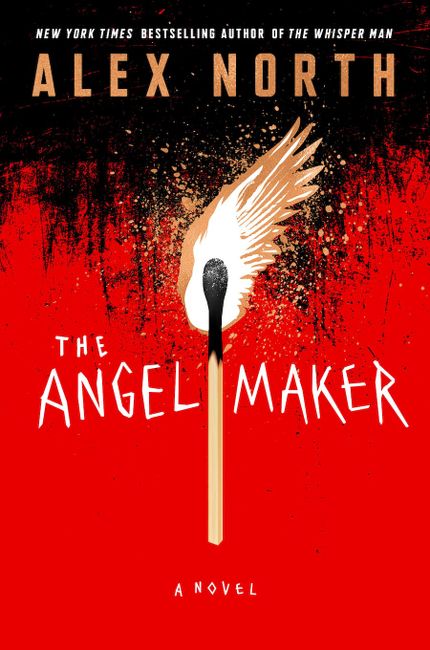 If you could see the future,” Sam asked her, “would you want to?”

It was the end of the day, and they were sitting outside the school building. There was a roundabout there with a stone edge and a circle of flower beds in the center, and Sam and Katie met there every afternoon at the end of lessons. They were seventeen years old. As teenagers do, they sat and gossiped. They complained about her parents.

They asked each other questions.

If you could see the future, would you want to?

Katie thought about that. It was exactly the kind of question that had made her fall in love with Sam in the first place, but in that moment it made her uneasy. Sam was handsome and charismatic—full of talent and ambition— and for some unfathomable reason, he seemed to be in love with her as well. That made her happy, of course, but she was also frightened of losing him. Next year they would both be going away to different universities, and that upcoming separation felt like a threat looming on the horizon.

What was going to happen to them then?

“Because what if you saw something you didn’t like?”

“Then you’d be able to change it.”

It was a warm afternoon with only the slightest of breezes. She watched as a group of kids drifted past them, hitching their bags up on their shoulders, talking and laughing. They were heading down the sunlit drive that led to the nearby village, while others were wandering away toward the bus stop. It was a reminder that she and Sam would have to part ways shortly. Katie lived close to the school, whereas his house was a bus journey away.

Discover the Secrets of Hidden Lake Camp in Book of Knives

For a long time, Katie had felt like a spare tire in her family; it was her younger brother, Chris, whom her parents doted on. But over the last year, Sam had made her parents a lot more interested in her life than they had been previously. Her mother, especially, was suspicious of him and overly keen to monitor their relationship and keep it from going too far. If Katie was not home on time after school, there would be questions. At weekends, she and Sam were not allowed to be alone together. If Katie went to his house, her mother was always careful to ensure his parents were home too.

The resentment that caused had been growing steadily, simmering away inside her, a little hotter every day. What she wanted to do was to spend as much time as possible with Sam before they were separated, and it seemed desperately unfair that her mother believed she was entitled to intervene.

“Could you change it though?” Katie wondered.

“Well—if you just saw the future, you wouldn’t know how you got there. So anything you did to avoid it might actually be what led you to it all along.”

She leaned her head on his shoulder, and he kissed her hair.

They sat like that in comfortable silence for a few seconds, and she closed her eyes, enjoying the sunlight on her face.

But then Sam started to say something and stopped.

She opened her eyes.

Katie leaned away and looked at him.

“I was just thinking.”

“That my parents won’t be home for an hour or so.”

Her chest tightened for a second, and then her anxiety evaporated. He’d said it so casually, as though the words meant nothing at all—just an observation, really—but the weight of his suggestion hung in the air, and despite the warmth of the afternoon, she shivered a little.

She wanted to go back with him so badly.

Find Your Next Spooky Read Based on Your Mood

He nodded. Katie wondered what was going through his mind. Was he losing patience with her? Had he already? There had been no pressure from Sam on that level at all, but she couldn’t help feeling she’d just failed a test of some kind. And she supposed that she had. Because even though her parents didn’t seem to care very much about her, she was still being good, wasn’t she?

Still doing what she’d been told. “One day though,” she said.

She looked to her right—and there was Chris, walking slowly along the road toward them. As always, he was alone; she didn’t think he had any friends. His hands were tucked in his pockets, and his head was bowed. He was fifteen but looked younger and smaller than his age, and Katie had to wait for him every day and walk home with him. Her mother insisted. Katie supposed it made sense. They were at the same high school, after all, and were both going to the same place at the same time.

But while she loved her brother very much, she was not his keeper, and the sight of him now caused the resentment inside her to blaze even brighter. God—he even carried himself like he didn’t belong. Why couldn’t he look after himself instead of her being expected to do it? Why didn’t her life matter to her parents as much as his?

He sighed and stood up, hitching his bag onto his shoulder.

Then he stood in front of her, waiting for her to stand up and kiss him goodbye as she always did. But she was still looking to her right, watching Chris walking toward them, and the feeling of resentment that had been building inside her finally spilled over.

If you could see the future, would you want to?

You can’t, of course. A life is lived forward. The present is a vantage point from which every moment in the past is inevitable and every moment in the future invisible. Most of those moments won’t be important, but a handful will turn out to be pivotal—shattering, even—and you never know which until it’s too late.

As Katie boarded the bus with Sam that day, she didn’t know that a local man named Michael Hyde was leaving his house right then.

That he was walking toward his car with a knife in his hand.

She spent an hour at Sam’s house that afternoon. She had made a deci- sion to do what she wanted to do for once, and it was thrilling. She would deal with the consequences later—and really, how bad could they be? Sam walked her to the bus stop afterward, their hands clasped tightly together and their upper arms pressed against each other. He kissed her goodbye. When the bus set off, Katie smiled at him through the window until he was out of sight, and then she looked straight ahead, smiling to herself instead, her body full of warmth and light. It felt as though she hadn’t just discovered a secret but somehow become one.

After getting off the bus, she walked home slowly. She was more than ready to have whatever argument awaited her there, but she also wanted to hold on to that feeling inside her for as long as possible. And besides, it was a beautiful afternoon. The sun was still bright and warm, and there was a lovely cast to the light that brought out fresh colors in the world around her. Everywhere she looked, it was like she was seeing things for the first time. As though everything had changed.

And, of course, it had. She just didn’t know it yet.

As she turned the corner, the scene before her made no sense. They lived in a quiet area, but the street ahead was crowded with police cars and vans. Everywhere she looked, she saw red and blue lights flashing around. The sight of it all stopped her in her tracks. Her gaze moved to the yellow cordon that had been set up across the street, with what seemed like crowds of police officers moving around behind. A part of her was aware there should have been a great deal of noise, but for a few seconds it was like being underwater, and all she could hear was her heartbeat thudding dully in her ears.

Something terrible has happened.

She would always remember the sickening, sinking feeling inside herself. And she would remember what came along with it: the desperate urge to go back in time and change things.

Please, she would remember thinking.

She would have given up anything.

Katie took a few faltering steps forward, unsure at first whether her body would work properly—and then she began to run. One of the police officers saw her coming and intercepted her at the tape. She didn’t know it at the time, but he had been expecting her. Her parents had called Sam’s house while she’d been on the bus and learned she was on her way.

Katie ignored him. He was tall and solid, and she had to step to one side in order to stare past him at the scene beyond the cordon.

She didn’t understand what she was seeing—not right then. But she took it in anyway, and even seventeen years later she could still see it all so clearly whenever she closed her eyes.

The old red car, abandoned at an angle across the pavement, where it had swerved in to block Chris’s path.

The blood spatters from where he had been stabbed repeatedly.

And the larger pool of blood, in the gutter, where Michael Hyde had begun his desperate attempt to cut off her brother’s face.

Want to keep reading? Subscribe to Creepy Crate for your chance to receive a copy of The Angel Maker!

This post is sponsored by Celadon Books. Thank you for supporting our partners, who make it possible for The Lineup to continue publishing the creepy stories you love.