He's one of the most famous figures in Australian history ... only because police can't figure out who he was or what happened to him.

It’s still considered the most mysterious case in Australia’s history.

On December 1, 1948, a man’s body was found propped up against a stone wall at Somerton beach. He had no identification whatsoever – even the tags in his clothes, all made and obtained in America, were missing. A half-smoked cigarette rested on his right shirt collar.

Police pillaged his pockets and came up with a laundry list of odd items: an unused second-class rail ticket to Henley Beach, a used bus ticket from the nearby city of Adelaide, an aluminum American-made comb, a half-empty packet of Juicy Fruit gum, cigarettes, and matches. After digging a bit deeper, they found a hidden compartment in his pants with a scrap of paper torn from the last page of a rare book of Persian poetry, The Rubaiyat of Omar Khayyam.

The only words written there: Tamam Shud. “It is finished.”

Armed with this one important clue, the police started searching for the book that had originally held the page. A man came forward days later saying he had found the valuable, first-edition tome on the backseat of his car one morning after leaving the window open. The car had been parked near Somerton beach.

Inside the book, they found a handwritten cipher, penciled in all caps. One of the lines was crossed out. There was also an unlisted phone number. 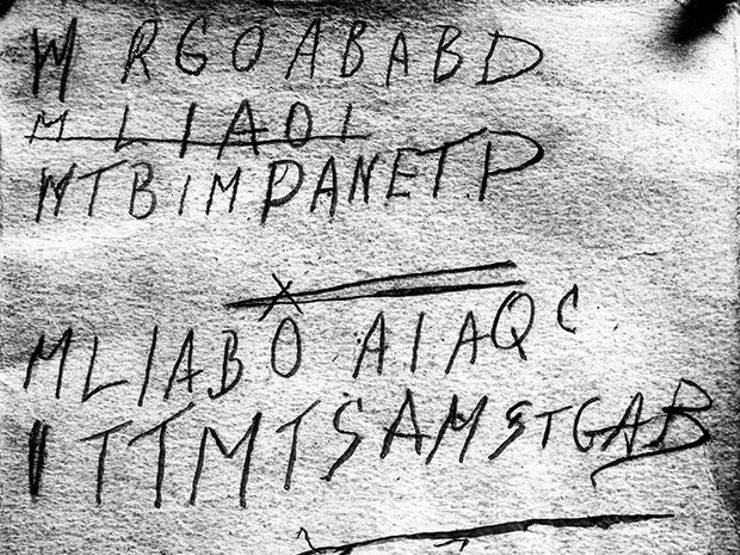 After experts couldn’t crack the code (they said it wasn’t long enough to establish a pattern in the letters), the police found the owner of the mysterious phone number.

Her name was Jessica Thomson, and she worked as a nurse in Somerton. Her house was a stone’s throw from where the dead man was found. Thomson claimed she had never seen the man before, although witnesses later stated they had seen him knocking on Thomson’s door the day before he was found. When she didn’t answer, he left and walked down to the beach. Although police questioned Thomson further, she never gave them any useful information, and they crossed her out as a suspect.

An autopsy revealed the man had been extremely healthy and strong, and the coroner ruled a case of foul play. Although police suspected he was poisoned, tests came back inconclusive. If he really died from poisoning, it was a substance that wasn’t known in the country.

All the clues – indecipherable code, exotic poison, American-made personal effects – pointed toward the Somerton Man being a Soviet spy. Police suspected Thomson might be a spy as well, but they had no evidence to charge her.

After Thomson died, her daughter Kate came forward saying her mother knew more than she told police. Kate had long suspected her Russian-speaking mother to be a former Soviet spy, who not only knew the Somerton Man, but had had an affair with him. In fact, she thought her half-brother, Robin, was probably the man’s son.

Government officials have since refused requests to exhume the body and test it for DNA evidence. So even if Kate’s theories are correct, Jessica Thomson and the Somerton Man’s secrets are staying with them in their graves.

[via 60 Minutes; The Advertiser]