She Fell in Love with Her Fiancé’s Killer

For Hope Masters, love blossomed in the strangest place.

On a morning in 1973, troubled 'It Girl' Hope Masters woke to find the her fiancé, Bill Ashlock, lying lifeless in their secluded ranch rental—located in the foothills of the Sierra Nevada mountains. Just seconds after discovering his body, someone else appeared at the scene: A man who, at first glance, seemed a stranger, but who Masters soon recognized as a recent acquaintance.

"Taylor Wright" had approached Masters and Ashlock the previous day, wanting Ashlock to be a subject for his L.A. Times piece on eligible bachelors. But the man was neither a journalist nor "Taylor Wright." His true name was G. Daniel Walker—a wanted fugitive, a killer, and the soon-to-be-object of Master's affections.

After murdering Bill, Walker abused Masters over the span of one weekend. He spun wild tales of his guilt and motives, ultimately persuading Masters to corroborate his alibi. Trapped in the beginning stages of Stockholm Syndrome, she agreed—though her cooperation would later cause her to be outcasted from local society.

In A Death in California, true crime author Joan Barthel provides fascinating insight into the strange relationship between Walker and Masters—a case that The New Yorker called "one of the strangest...in the annals of American crime." Beyond detailed analysis and interviews with anyone connected to the case, the book also argues Masters' innocence. Far from the criminal that she's been branded, Hope Masters was—and is—a victim of great physical and psychological torture.

Learn about the moment Masters discovered her fiancé from the excerpt of A Death in California below. 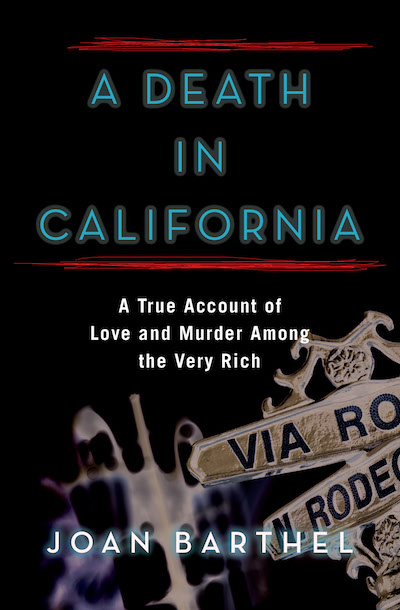 Hope jerked her head away from the cold, hard object in her mouth. She rolled across her bed, then across the other twin bed. She ran out the bedroom door and through the hall door into the living room.

The living room was dark, but in the glow of the dying fire, she could see Bill sitting in his usual place, at the end of the sofa nearest the fireplace. His feet were stretched up on the coffee table. He was holding his drink in his left hand, resting it on the arm of the sofa. His eyes were closed. As she ran across the room, Hope saw the rocking chair was empty. Taylor is gone, she thought in a flash of panic, and a maniac has come in.

She reached the sofa and grasped Bill by the shoulders. She shook him slightly, and his head wobbled and fell backward against the sofa. “Bill, Bill, wake up, help me!”

The voice came from behind the sofa, from the darkness in the dining area.

But Hope kept shaking Bill and screaming. “Help me, wake up, help me!”

The voice came again, a deadly calm, flat monotone that Hope did not recognize.

Someone approached Hope from behind, grabbed her by the hair, and pulled her away from the sofa. He wrapped her arms behind her back and spun her around, facing the fireplace. In that instant, when she let go of Bill’s shoulders, Hope heard a heavy thud.

The man holding her arms thrust them out in front of her, “Look at all the blood. See all that blood. He’s dead. He’s dead.” In the pale firelight, Hope could see that her arms and hands were covered with blood.

She began to vomit. She ran for the bathroom and the man ran after her, tearing at her clothes. The blouse she had unbuttoned when she lay down came off as she ran. In the bathroom, she fell to her knees and groped in the darkness for the toilet bowl, vomiting and gagging.

“Get into the bedroom,” the man said, grabbing at her.

She felt heavy arms around her. She grabbed a towel and jammed it up against her mouth as the man half-dragged, half-carried her into the bedroom, bumping her into the walls along the way. He hurled her onto the bed nearest the window, the bed she’d been sleeping in. “I don’t need a gun to kill you,” he said. “I could crack your neck with one hand.” And he put his hand around her neck.

...Hope felt cold, colder than she’d ever felt in her life. The coldness in the room was unreal, unbelievable. It flashed across her mind that evil brings a feeling of intense cold. In the icy cold blackness of the room, she felt she was in the presence of true evil, and that terrified her more than anything that might happen.

He raised his head slightly. “I can’t leave you alive,” he said. “You could identify me.” Hope moaned again.

“You know I’m about six feet tall and about 20 pounds overweight and you know that my hair is beginning to thin in the back.”

“I don’t know what you are talking about,” Hope said. “There are millions of people who could fit that description. I don’t know who you are. I would never identify you. Please go away. Take my car and go away.”

The man got up. As she lay motionless, she heard what sounded like tape being ripped, then she was being rolled over on her side. He pulled her hands behind her and her feet up toward her hands, then he wrapped adhesive tape around them, binding them all together in a painful, tight roll.

“Don’t scream,” he warned. “If you have any ideas about screaming for the foreman, I’ll just kill him and you too.” He covered her with blankets. As he tucked them in around her neck, he bent over and put his face against her cheek. “I love you,” he said. She heard the door close.

For a long time there was stillness, no sound anywhere. Hope felt she was hallucinating, that none of this was happening, none of this was real. Her heart was pounding so she could hear it echoing around the room. She could feel veins in her wrists throbbing and popping and, very quietly, beneath the blankets, she began to tug at the end of the tape with her right hand, no more than a quarter inch at a time, so slowly and quietly she almost felt she wasn’t doing it at all.

After a long time, she heard a sound in the room. Someone was there again, sounding agitated but not wild, not violent, not like the wild animal-like man who had been there earlier.

He pulled the blankets back and felt her hands. “Oh, very clever,” he said in a normal tone of voice. “You’ve unwrapped your hands.”

“It was hurting so much,” Hope said. “I’m not going to try and do anything. Is Bill dead? Oh please, please tell me Bill isn’t dead. Please go see if Bill is really dead.”

“I have seen him and he is dead,” the man said calmly.

Hope began to moan. “Oh, my God, oh, my God, my God, why Bill?” Black pain surged through her head, pounding in her skull. She felt as though it would burst open. Images of Bill flashed through her mind in a crazy dance. Bill holding her, kissing her, saying gently, “I love you.” Bill sweeping K.C. up in his arms. Bill laughing. “Did he know? Did he suffer?”

“Because he was with you.”

“With me?” Hope could not grasp that. “You mean he is dead because of me?”

“Because someone wants you dead,” the man said.

Want to keep reading? Get the full story by downloading A Death in California today.

This post is sponsored by Open Road Media. Thank you for supporting our partners, who make it possible for The Lineup to continue publishing the killer stories you love.