A Ghost in the Room: The Haunted History of Rocky Hill Castle

Multiple spirits were said to have wandered this eerie Alabama estate, including one spectral figure who may have been caught on camera.

Though sadly no longer standing, Rocky Hill Castle was once one of the strangest and grandest pieces of architecture in Alabama. It was also known as one of the state’s most haunted locations.

Built between 1858 and 1861, Rocky Hill Castle was a plantation house built for James Edmonds Saunders to replace his previous home that had stood on the grounds since the 1820s. It is said that Saunders demolished his old dwelling and oversaw the construction of Rocky Hill Castle because he wanted a “grander dwelling.” Clearly, he accomplished his goal. 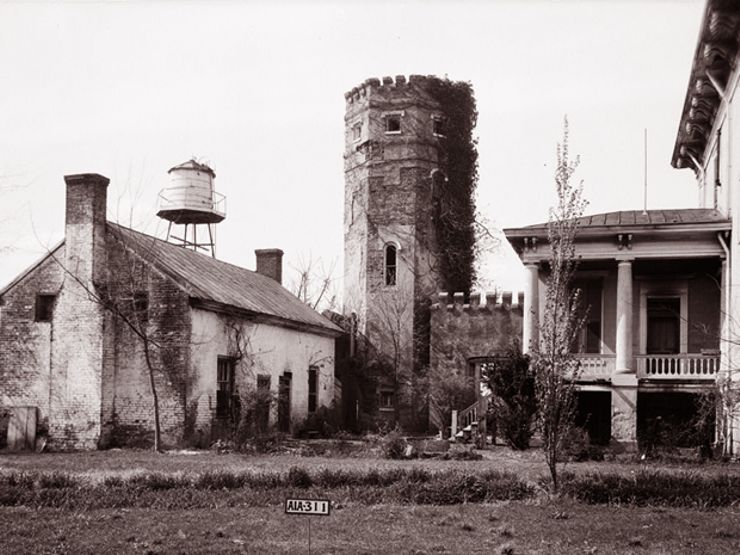 Built using a combination of Greek Revival and Italianate architecture, the interior of Rocky Hill boasted some of the most elaborate wood and plaster work in the state. Perhaps the most striking feature of the entire mansion, however, was the five-story Gothic Revival tower—complete with battlements—that connected to the house through a high stone wall with a dramatic Tudor arch. The octagonal tower reportedly housed Saunders’ slaves, and it is said that he stood on its top floor to shout out orders and survey his lands.

Related: GHOST LIGHT IN THE WINDOW: THE DRISH HOUSE HAUNTING

The architect or architects of Rocky Hill are unknown, but one of the best-known ghost stories surrounding the plantation—as told in Thirteen Alabama Ghosts and Jeffrey—claims that the house was built by a Frenchman, and Saunders had refused to pay his bill. Shortly thereafter, the architect died. His ghost then returned to haunt the estate, chipping away at the foundation in the cellar. As the story goes, the sounds of this ghostly hammering echoed from the lower levels of Rocky Hill for as long as the house stood.

After James Saunders died, ownership of Rocky Hill was passed through the family before ending in the hands of Dr. Dudley Saunders, James Edmonds Saunders’ grandson. The doctor did not stay long. According to local lore, he and his family abandoned the house in the 1920s, due to the ghostly activity that took place within its walls. One account tells of a frustrated Mrs. Saunders who demanded that if any spectral entities were present they should speak up or hold their peace. A phantom voice bellowed in her ear: “Madam, I’m right here!” The family is said to have packed up and fled within hours.

Related: THE GHOSTS OF SAUER CASTLE

Rocky Hill slipped into a state of disrepair after the departure of the doctor and his family. Its final owner demolished the structure in 1961. Before the destruction, Alex Bush photographed Rocky Hill Castle in 1935, as part of the Historic American Buildings Survey. According to some observers, Bush’s photographs captured evidence of ghostly phenomena, including a fairly clear image of a man’s face and collared shirt. 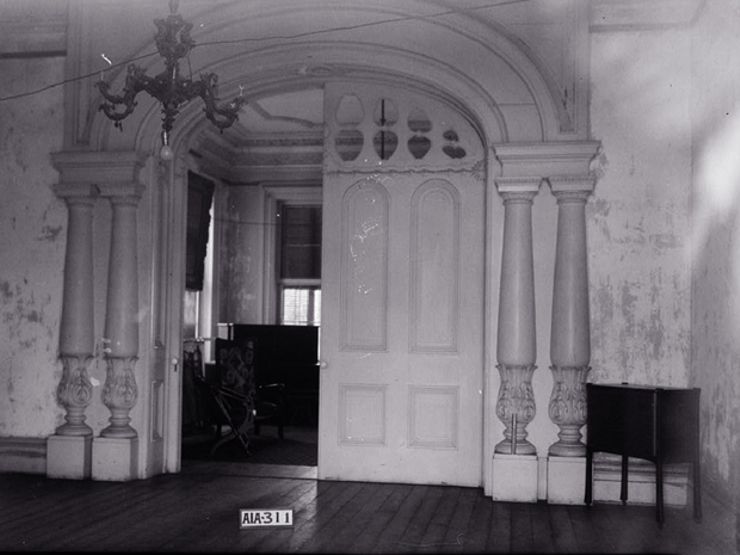 Indeed, Rocky Hill had accumulated a wealth of spectral rumors long before the eerie photographs were taken. Stories circulated of a Lady in Blue who had come searching for her lost lover and was seen on the stairwell and in the wine cellar. Others reported the clanking of chains and the ghosts of Civil War soldiers. The house did serve as a hospital during the Civil War, and several Confederate soldiers were buried in the nearby Saunders family cemetery. A man who lived in a cabin near the house claimed to hear the mansion’s piano playing by itself, while other tales spoke of illicit slave trading and a secret tunnel that ran from the cellar of Rocky Hill Castle to the Tennessee River.

Related: The Myrtles Plantation: Who’s That Girl in the Window?

Whatever the truth of Rocky Hill’s ghostly past, today nothing remains. Visitors searching for the once-striking building will find only the packed earth of an empty field just a few miles from the tiny town of Courtland.

All photos via Library of Congress / Wikimedia Commons; Uncropped version of final photo via Alabama Pioneers