They thought they hit the jackpot…but it came with a terrible price.

In the Guinness Book of World Records, it's listed as the largest and most successful hotel robbery of all time; but while the 1972 New Year's robbery of New York City's luxurious Pierre Hotel may have gone off seemingly without a hitch, those involved in the heist didn’t reap the benefits of their newfound riches for long. Today, the only surviving member of this team of eight "gentleman thieves" reveals the shocking story of the greatest hotel heist in history, with the help of author Daniel Simone, in his book The Pierre Hotel Affair.

At 3:50 A.M. on the morning of January 2, 1972, the thieves arrived at the hotel. The strategic timing was perfect because most of the hotel guests were sound asleep, and their valuables, which had been worn to New Year's Eve parties only the night before, were stored in the hotel's safety deposit boxes until the banks opened that morning. Plus, since it was a holiday, the hotel was operating on a skeleton crew.

The Pierre Hotel heist was planned by Robert Comfort and Samuel Nalo, professional burglars who specialized in hotel jobs. Along with other luxury hotels throughout Manhattan, they had previously robbed the suite of the famed Italian actress Sophia Loren while she was staying at the Sherry Netherland Hotel—relieving her of an estimated $1 million in jewelry. They planned the Pierre Hotel robbery with the blessing of the Lucchese crime family. In fact, several associates of the family made up their eight-man team, which included two professional contract killers.

Related: Before the Lindbergh Kidnapping, There Was the Abduction of Charley Ross

The team arrived at the hotel's 61st Street entrance in a black limousine, and identified themselves to the security guard as "Dr. Foster's party." Learning that the hotel kept its doors locked at night, Comfort had reserved a room under the name Dr. Foster. Once the security guard called the registration desk to confirm the room, he unlocked the door and let the team inside. Upon entering, they held guard at gunpoint and left one in their party to keep watch over the entrance.

Rounding up the rest of the security guards and the hotel's modest staff—as well as any guests who happened to confront them—the thieves clapped their hostages in handcuffs and held them for the roughly two-and-a-half hours that the robbery would take. The hostages were told to lie face down on the floor of an alcove near the registration desk, but were also treated respectfully—addressed as "sir" or "miss," even while being warned that if they identified any of the thieves to the police they would be killed.

Robert Comfort continued to answer the phones at the registration desk during the course of the robbery, sending one of the crew to take guests a pillow or anything else they might call down to request. If a guest caused them any particular trouble, that guest joined the hostages on the alcove floor. Before the heist was complete, they had accumulated quite a number of hostages; fortunately, the forward-thinking thieves had brought along three-dozen pairs of handcuffs for such an eventuality.

The crew targeted the safety deposit boxes of people whose names they recognized from the society pages, making sure they didn't waste their time on anything that wouldn't be worth a lot of money. One box contained $500,000 in cash, another $3 million. Yet the biggest single score of the night was a Harry Winston diamond necklace belonging to one Baroness von Langendorff, which was worth $750,000.

A little after 6:00 A.M., the thieves had managed to break into many of the hotel's 208 lock boxes, absconding with $27 million in cash, jewels, and other goods. They left the hotel at 6:30 A.M., just ahead of the incoming 7:00 A.M. morning shift. Before they took their leave, Comfort gave a $20 bill to each member of the hotel staff, along with a repetition of his warning against identifying any of the thieves to the police.

Though one patrol car passed the hotel during the robbery, it didn't stop. Ultimately the crew made it out of the Pierre with a fortune in stolen loot and not a single shot fired. However, the aftermath of the robbery didn't go quite so smoothly. While most of the jewelry was easy enough to fence, the Lucchese family consigliere demanded a 33% cut of the take—much larger than was usual to help them get rid of the loot. The box containing $3 million dollars in $500 dollar bills proved to be its own problem, since the bills had been removed from circulation in 1969.

Related: Face on the Milk Carton: What Happened to Johnny Gosch?

Ultimately, Comfort and Nalo were arrested after the $750,000 Harry Winston necklace was found in the possession of a Detroit mobster who also happened to be an FBI informant. They were the only two members of the crew who were ever charged with the Pierre Hotel robbery and they took a plea deal—which, according to the team's only surviving member, was arranged via a bribe of $500,000 from the Lucchese crime family to a Manhattan Supreme Court Justice. They each served only 19 months in prison for the robbery.

Related: The Best True Crime Documentaries You Can Stream on Netflix Right Now

During this time, the distribution of the loot from the job didn't go according to everyone's wishes, and one member of the team, contract killer Donald Frankos, vowed revenge. He murdered two other members of the team, Ali-Ben and his brother-in-law Al Green, in 1981. Though an unknown assailant ultimately gunned down Samuel Nalo in 1988, it allegedly was not Frankos who pulled the trigger. Robert Comfort died of cancer in 1986. Today, the only member of the team who is still alive is Nick "The Cat" Sacco, who entered the Federal Witness Protection Program in 1974, after tipping off authorities about details of an unrelated mob murder. Recently, however, Sacco broke his silence by collaborating with author Daniel Simone on The Pierre Hotel Affair, which offers an inside look at the largest hotel heist in history. In order to preserve Sacco's anonymity, the two spoke on the phone and exchanged documents through a PO box, never actually meeting in person. Though just published in May, the book has already been optioned for a movie. 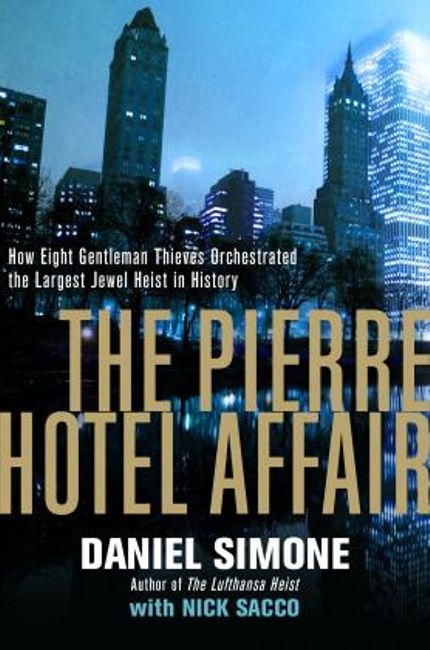 This post is sponsored by Pegasus Books. Thank you for supporting our partners, who make it possible for The Lineup to continue publishing the true crime and creepy stories you love.