Changing a name and moving across the country isn't enough to leave behind 13 murders.

SPECIAL NOTE: Murderabilia will be one of two titles included in next month's Creepy Crate.

When Tex changed his name to William McNary and moved far from Illinois, he thought he could leave behind his nightmarish past: the trauma, the memories, and, most importantly, the 13 murders his father committed. His new life is a good one. Older sister Polly and wife Jill know about the past, but they've found peace in California.

Harvey Dean Kogan, William's father, didn't just kill people. He killed women and posed them, photographing their broken bodies and sending the images–and sometimes parts of their bodies–to local newspapers. Harvey was arrested when William and Polly were just children. The siblings did their best to escape. But William's new stalker won't let him forget his father's bloody legacy.

After receiving an eerie phone call at work, William returns home to discuss what's happening with his family. In the following excerpt, the stalker makes first contact. Be forewarned: This deeply creepy book may keep you up all night. Murderabilia will be published on July 8–but Creepy Crate subscribers will get their hands on the spooky new serial killer novel early.

Read on for an excerpt of Murderabilia, one of two books included in the June/July Creepy Crate. 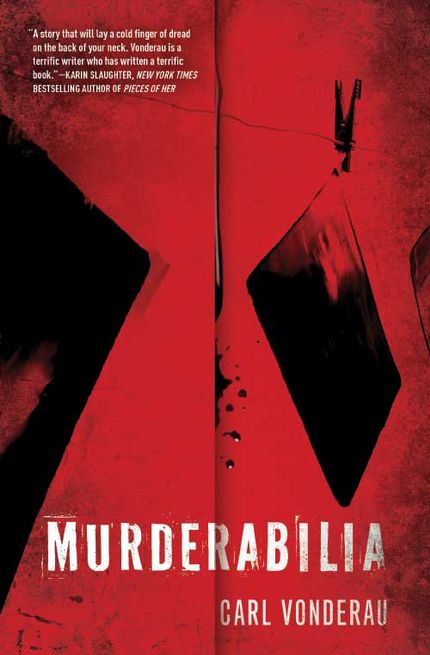 That night, lying in bed next to Jill, I remembered my father. I could still see those unblinking amber eyes as he gripped a hotdog in each hand. Then he rose to his giant height above the dinner table. The trailer door slammed. I could feel him even now. He was a darkness that hovered over our house.

My home office stood on a hallway of bedrooms off our open kitchen and living room. It was where I retreated when Harvey Dean Kogan kept me awake. I unlocked the bottom desk drawer, but not the metal strong-box inside. A bottle of bourbon, a vape pen, and a silicone ball sat next to the box. I opened the ball and dabbed marijuana extract, like maple syrup, into the open cavity of the vape pen. The pen’s coils heated up. I breathed in the marijuana and expelled the gray-white mist. Jill didn’t know about my medication. Nor the thoughts I was blotting out. Some nights it was the only way I could sleep.

Want more chilling stories? Sign up for The Lineup's newsletter, and get horrifying book recommendations delivered straight to your inbox.

I turned on my laptop and pulled out the bottle of bourbon. First I looked at emails from work, then sports pages and other news. A half hour later I moved on to the websites devoted to the Preying Hands. It had been thirty-one years since we’d changed our name and moved to California, but his fans were still searching for us. Tonight there was no mention of Harvey Dean Kogan’s family. Whoever had traced us to San Diego didn’t boast on the internet.

I took a shot of bourbon. Then another.

At midnight the computer pinged with a message that contained no subject line. I didn’t recognize the sender. My finger stayed poised over the mouse. No words, only an internet address: www.preyinghands.com.

I clicked on the link. A black screen contained a single prompt that asked for my first name. I entered it and the blackness transformed into a text screen surrounded by charcoal sketches of hands: long fingers and jagged lines on the palms, blackened and manicured nails. Two hands were folded in prayer like the Dürer drawing. Text glowed red underneath.

Do you really think he isn’t inside you? Your mama can pretend that’s true, but you know better. Your daddy also couldn’t sleep at night. Even your photography is like his. Right, Tex? Imagine what an art show I could put on for your neighbors.

I jumped up from the chair. I rushed to the kitchen and its window. All was black in the yard outside. I hurried to the living room and its full-length windows. Nothing was visible, not even the outline of our garden or the orange tree. But I could feel him out there in the dark. He knew my fears. Even the horrible photos that I’d shot all those years before. And he was laughing.

My breath still coming hard, I paced back to my office. The message still lit up the screen.

Don’t you know I’m just having fun teasing you, little brother? With a simple conversation, all this will go away. A few words won’t hurt you. Go to Kate Sessions Park at 12:30 tonight. Jill, Garth, and Frieda will be sleeping like kittens in their little beds. I’ll be waiting at the end of the road by the turnabout. Don’t be late. This is just between you and me and our father. No one else.

Kittens. In prison my father had said that he’d started killing cats as a teenager. It was practice for women. My hand struck the mouse. The site disappeared.

Gradually my thoughts came into focus. There was no reason to panic. I could persuade this deluded fan to leave us alone. One way or another.

I clicked on the link again. But the server informed me that I wasn’t authorized to enter the website.

I’d tried most of my life to escape Harvey Dean Kogan’s legacy. All I wanted was to live normally and savor the small joys of raising children. My family had been so careful. And still someone had found us.

It was 12:08. If I called the police, what could they do? Threatening to reveal someone’s true identity wasn’t a crime. By the time the police showed up, no one would be at the park.

I had to handle this myself. Right away. The alcohol and marijuana only strengthened my resolve. I’d confront the harasser. Force him to understand that my children’s lives could not be corrupted. I’d do anything to stop that. Anything.

Ten years earlier, when the internet crank had offered a reward to find us, I’d purchased a Colt .45 handgun. Now I took down the lockbox from the closet, dialed the combination, and slid out the pistol.

The edges of the stippled black rubber grip pressed coldly into my hand. The magazine could hold seven rounds and the chamber one. I put in the shells, one by one. I’d never been to a gun range or even shot the pistol. But I wouldn’t need to. It was just a prop.

I set the alarm and locked the doors.

Want to keep reading? Subscribe to Creepy Crate for your shot at getting Murderabilia early.

Murderabilia is available for pre-order now. Carl Vonderau's first novel is "an explosive premise" (Kirkus Reviews) no horror fan can afford to miss.

This post is sponsored by Midnight Ink. Thank you for supporting our partners, who make it possible for The Lineup to celebrate the horror stories you love.