3 Haunting Questions About the Disappearance of Maura Murray

In 2004, young Maura vanished without a trace. Over a decade later, her case remains an utter mystery.

On February 9, 2004, University of Massachusetts student Maura Murray crashed her car on an icy road in New Hampshire, over 100 miles from her dorm room where she should’ve been quietly studying. She was never seen again.

Over a decade later, there remain more questions than answers in Murray’s disappearance, and some of them are so strange that it’s no wonder this cold case has never been forgotten.

1. What was going on in Murray’s life?

The official website created by Murray’s loved ones includes a multi-part biography of Murray, calling her an “All-American Girl,” a model student, athlete, and daughter. She had attended West Point before transferring to UMass at Amherst to study nursing, and was planning to marry her high school sweetheart, Billy Rausch, who was stationed at Fort Sill in Oklahoma.

But behind Murray’s smile, what secrets could she have been hiding? It remains unclear why exactly she left West Point–some investigation has suggested that she may have been asked to leave for an Honor Code violation. During her time at UMass, Murray ran into some legal trouble, and was charged with improper use of a credit card a few months before her disappearance for possessing and using stolen credit card numbers. According to the blog of true crime writer James Renner, her arrest record was once public and he was able to retrieve a copy, but it’s now no longer available to reporters.

In the days before she disappeared, Murray uncharacteristically emailed professors to tell them that she would not be attending class, claiming there had been a death in the family. But there was no death, and nothing except a few internet searches and a phone call to a Vermont rental property to give any clues as to where Murray was headed or why.

2. How could Murray have vanished without a trace?

That February night in 2004, Murray drove her Saturn up Route 112 in New Hampshire. It was dark, there were snowbanks on either side of the road, and her car had been having problems. In fact, her father, Fred Murray, had visited her at school only a few days before to go car shopping, although they never ended up purchasing a new car.

Local bus driver Butch Atwood was on his way home when he came across the wrecked Saturn and a woman matching Murray’s description. He offered to help, but she insisted that she had already called AAA–strange, he thought, since cell phone reception was notoriously spotty in the remote area. Atwood went home, filed some paperwork for his job, and decided to call the police anyway. By the time the police arrived at 7:46 P.M., the Saturn was still in the road, but Murray was gone.

There were no sightings of any other vehicles, no footprints in the fresh snow. The area has been searched many times over the years, and if Murray was taken by one of the few people living within walking distance of the crash site, or if she wandered off to die in the elements, her body has never been found. 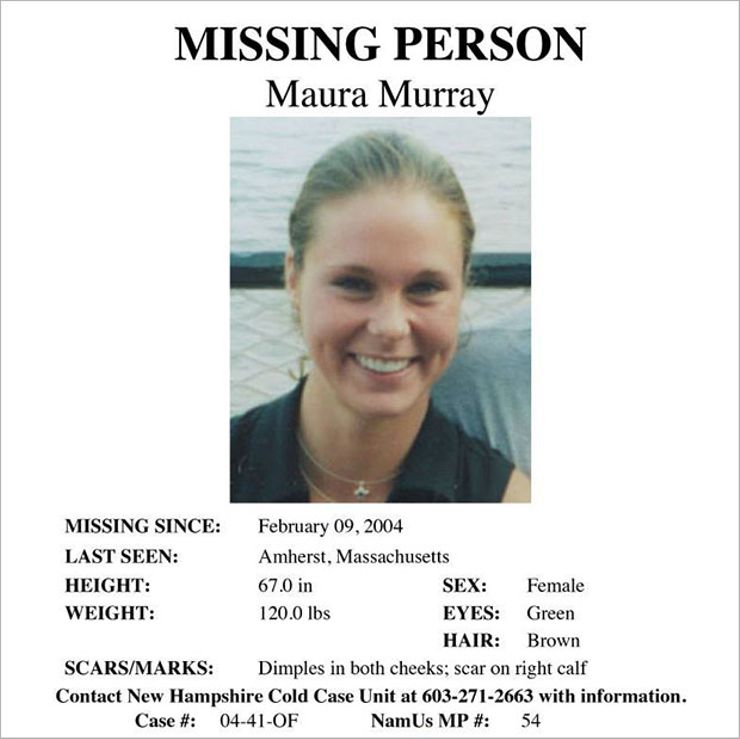 3. Could Murray still be alive?

Murray’s father maintains that Murray was abducted, and he has not given up his search for his daughter, whether dead or alive. Although investigators have never been able to detect any pattern between Murray’s disappearance and that of other women and girls gone missing in similar circumstances, there have been cases that might indicate the possibility of a connection. Four years before Murray’s disappearance, 16-year-old Molly Bish seemingly vanished from her lifeguard post in Warren, Massachusetts. Her remains were found three years later in a wooded area only miles from her home. Her murder is still unsolved.

The disappearance of Brianna Maitland is also eerily similar to that of Murray. Maitland’s abandoned car was found approximately 100 miles from where Murray’s was, one month later. The case caught the attention of Murray’s family, who added a page about Maitland to their official website. To this day, Maitland’s disappearance is unresolved, and her body has never been found.

Renner, who wrote True Crime Addict about his obsession with Murray’s disappearance, and has maintained a comprehensive blog tracking his investigation, posits at the end of his book that Murray may have willfully disappeared and is still out there, alive. There have been reported sightings of her in Montreal, a possible picture pulled from Facebook, individuals who insist that they have seen Murray in the 12 years since she disappeared. Either way, every time one lead seems to suggest answers, it splinters and multiplies into more questions. If Murray met with foul play, where is the evidence? In all this time, how has no one slipped and revealed information that might point to her killer? And if Murray did disappear of her own free will—why? Will she ever come out of hiding to tell us?

THIS STORY WAS FIRST PUBLISHED ON Crime Feed.

Too Young to Die: Who Wanted to Murder 15-Year-Old Annie Kasprzak?