10 Very Haunted Places in London You Can Actually Visit

From pubs to theatres and castles, legends abound of restless specters and inexplicable sounds. Plan a visit to some of the most haunted places in London. 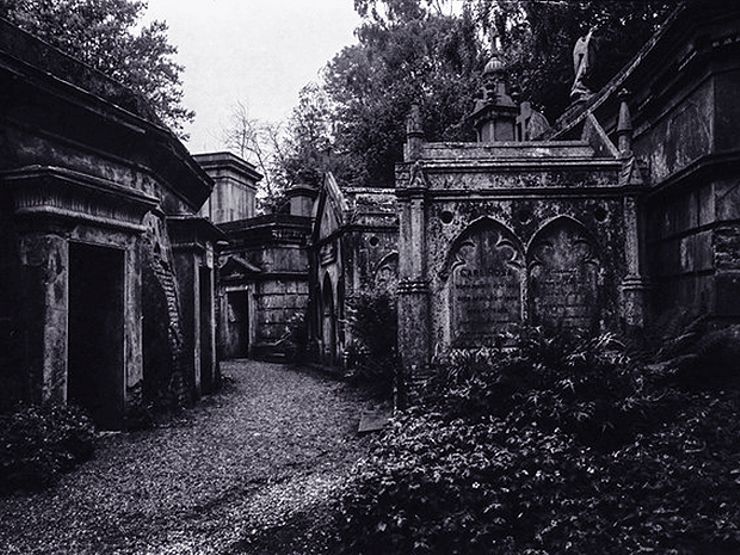 London is one of the world’s oldest cities. So, it makes sense that the British capital should have more hauntings per square foot than just about anywhere else. From pubs to theatres and castles, legends abound of ghostly spectres and inexplicable sounds. The following spooky spots are also some of the most popular and prominent in Britain’s international metropolis.

Discover the Big Smoke’s dark side and explore the 10 most haunted places in London that you can actually visit … if you dare. 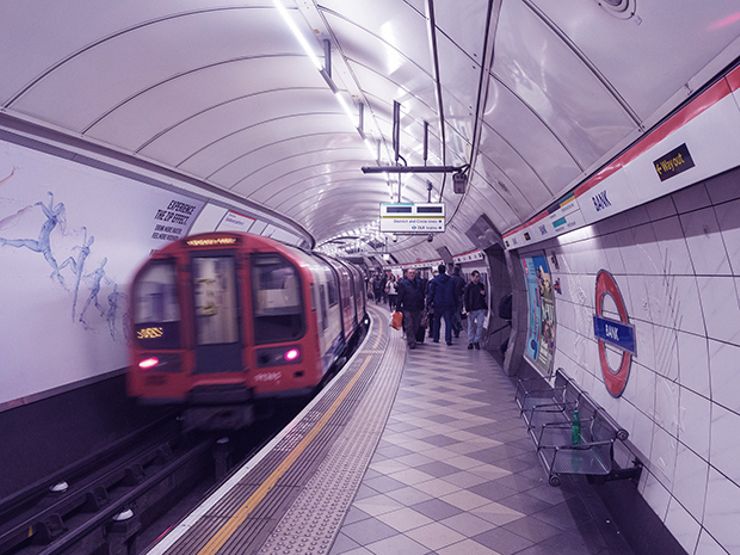 Bank station was built as part of Waterloo and City Railway platforms in 1898, and the first reports of its resident ghost, “The Black Nun,” started soon after. The spirit is rumored to be a nun named Sarah Whitehead whose brother was hanged for fraud. She went mad and regularly went to the Bank of England to inquire after him until her death–and even afterwards. To this day, her spectre is often spotted in the station, though travellers also report a general sadness and foul smell. That may relate to the death of 56 people after a German bomb hit the booking hall in 1941–or rumors of a plague-era mass grave beneath the station. 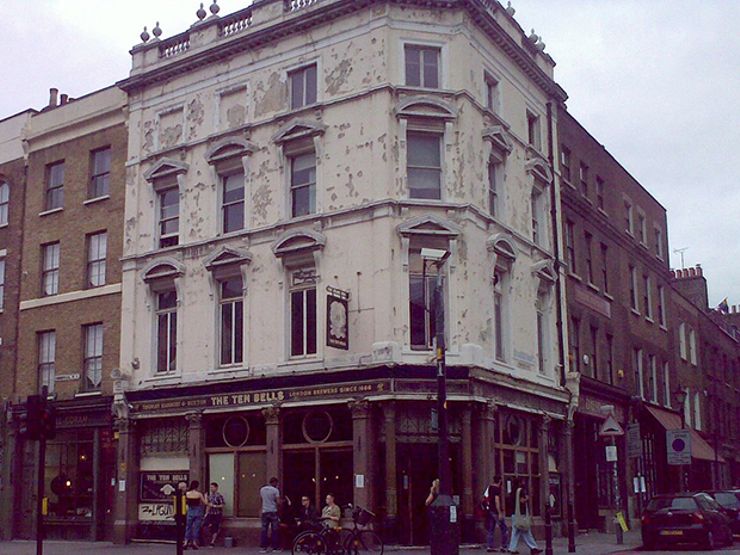 The Ten Bells public house in Spitalfields has long been associated with Jack the Ripper, as multiple victims drank there. The Ripper’s final victim, Mary Kelly, was last spotted at the Ten Bells, and her mutilated body was found just up the street. In the 1970s, the owners even temporarily renamed it Jack the Ripper, only to revert back to the original name years later. The pub has its own demon, though, in the form of a Victorian gentleman on the top floor. Staff residing there have complained of the ghost getting in bed with them, though one man was subject to laughter outside his door and repeated attempts by the ghost to shove him down the stairs. 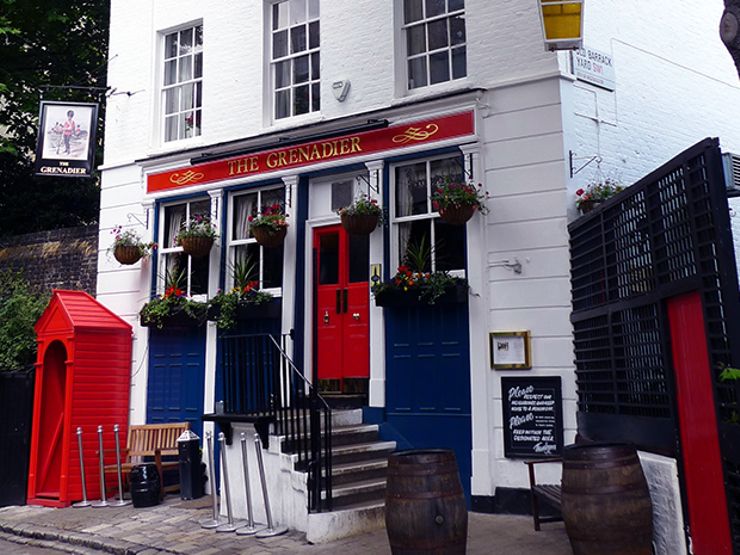 This pub in the wealthy Belgravia district was built in 1720 as the officer’s mess for the nearby barracks. In 1818, it reopened as The Guardsman public house, before being renamed for the Grenadier Guards at Waterloo. A sentry box remains outside as a reminder of its history. In time, the Duke of Wellington, King George IV, Prince William, and Madonna have numbered among its clientele. Yet, each September, a silent figure moves through the pub, steals objects, and leaves an icy chill. Legend tells of a junior officer beaten to death for cheating at cards, and moans and footsteps can be heard from the cellar where he died. 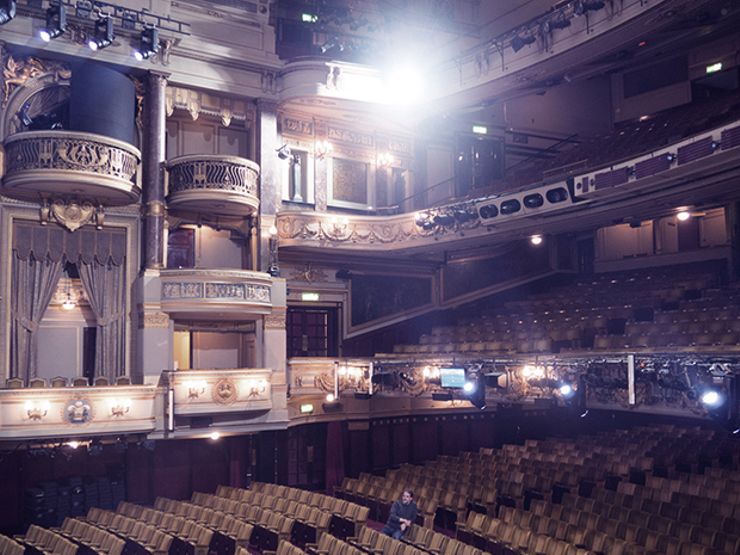 The city’s most haunted theatre is the fourth to abut Drury Lane in Covent Garden since 1663, making it the oldest site still in use in London. Multiple undead actors walk its halls, including popular comedian Dan Leno and actor Charles Mackin who stands where he stabbed a fellow actor. Joseph Grimaldi even provides guidance–when not giving ghostly kicks to staff. The “Man in Grey” is most well-known and is thought to be the spirit of a knife-stabbed man whose body was found in a walled-up side passage in 1848. His ghost in 1700s attire foretells a good run–before melting into the wall of his resting place.

Related: 16 Ghost Books to Haunt You for Days (and Nights) 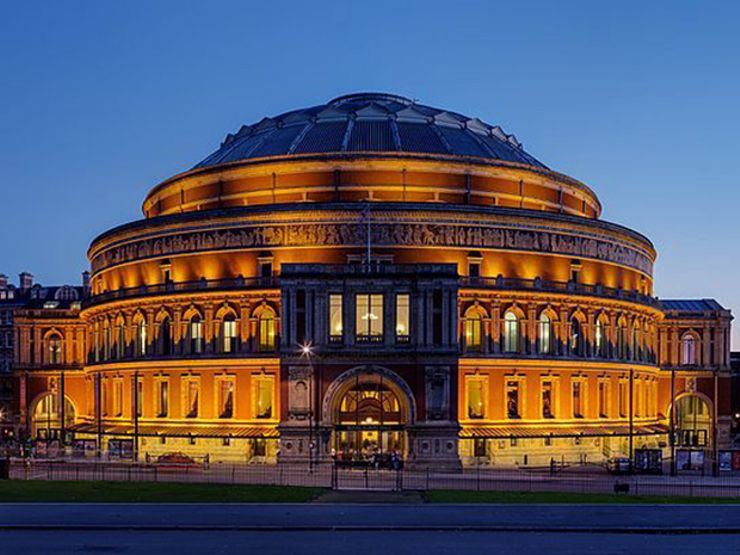 The Royal Albert is a concert hall in South Kensington that was named after Queen Victoria’s consort, Prince Albert. This treasured building was inspired by the Great Exhibition of 1851 and opened in 1871; since then, it has seen the world’s best in music, dance, film, and otherwise. The hall’s 9,000-pipe organ was originally the world’s largest and is still haunted by the grim ghost of its designer Henry Willis. Its other ghostly inhabitants include two young women in Victorian finery who giddily stroll arm-in-arm through the upper gallery each November. They are likely spirits from the previous building on the site—the Gore House of the Countess of Blessingdon, whose extravagant life ended in bankruptcy. 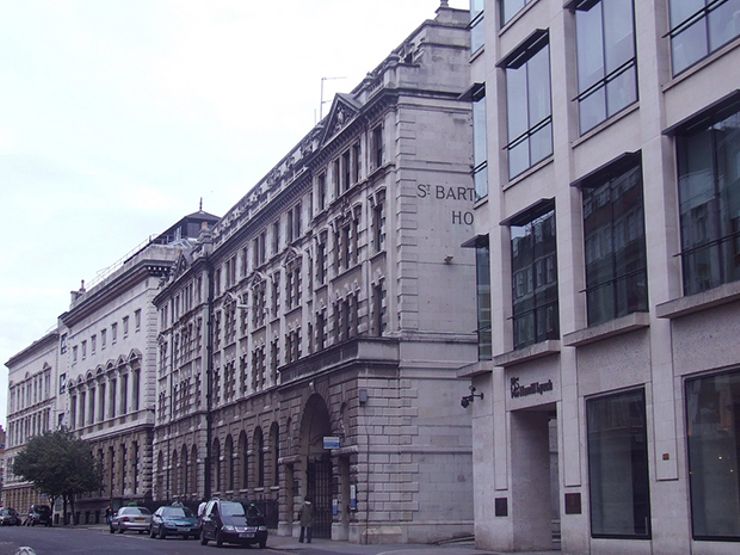 This West Smithfield hospital was founded in 1123 as part of the nearby St. Bartholomew’s monastery and is today the oldest hospital still standing at its original site. Like many hospitals, St. Bart’s has its fair share of ghost stories, with a ghostly nurse offering tea to patients on their death beds in Bedford Fenwick Ward and another stopping nurses from administering fatal overdoses in Grace Ward. Its most prominent spirit, though, is a murdered nurse who haunts the old-fashioned lift within a stairwell dubbed the “Coffin Lift.” Each night, it takes passengers to the basement no matter what button they push and freezes–only to follow them on the track back up the stairs. 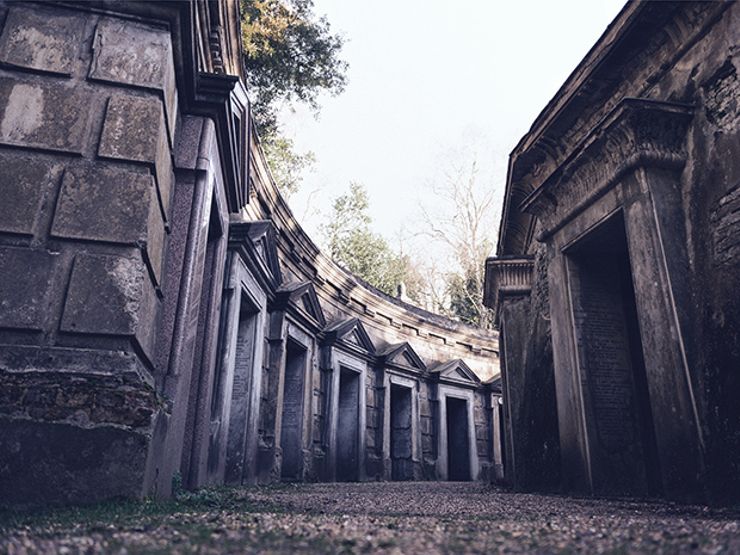 This sprawling cemetery originally opened in 1839 as one of the “Magnificent Seven” modern burial grounds in London. Since then, it has grown to include 53,000 graves with over 150,000 ‘residents’ and a wide array of funerary architecture. On top of Gothic tombs, Egyptian Avenue, and the Circle of Lebanon (pictured above), which is topped by a giant Cedar of Lebanon, Highgate is also a de facto nature reserve. Yet, something sinister lurks among its winding paths, with sightings of a man woman or a grey figure dubbed the “Highgate Vampire,” the latter of which sparked hysteria in 1970. Come for the legends, and stay to visit the graves of famous folk like Karl Marx, George Eliot, and Douglas Adams. 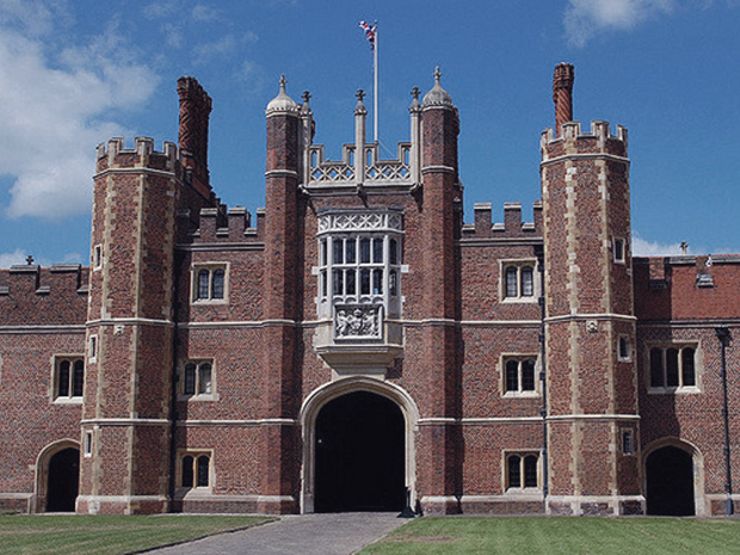 This palace just southwest of London was built around 500 years ago, with King Henry VIII seizing ownership. Among the ghosts who linger there, Henry’s favorite wife Jane Seymour often walks through Cock Court. His fifth wife, Catherine Howard haunts the so-called Haunted Gallery that she rushed through in life–still screaming for her husband’s pardon. The “Grey Lady” ghost of Sybil Penn, a nurse to four Tudor monarchs, even returned to her rooms at the Court after her nearby tomb was disturbed. Most recently, a skeletal figure appeared on CCTV in 2003– opening and closing doors with supernatural force.

9. The Tower of London 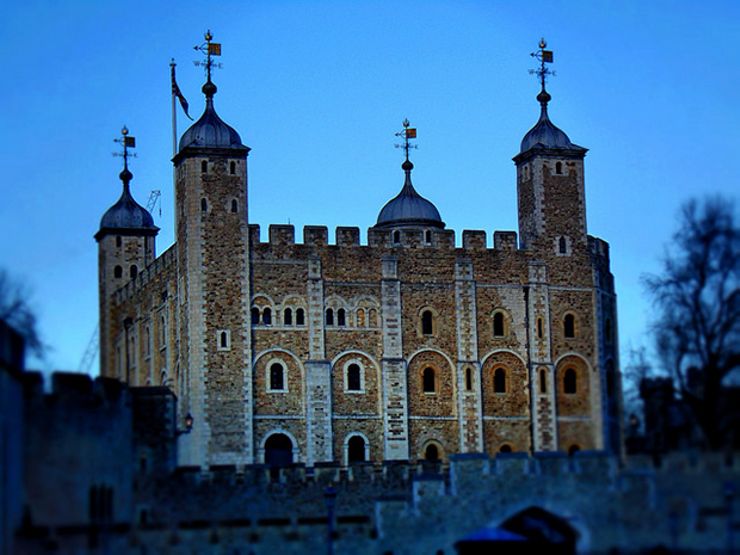 The Tower’s historic complex sits on the River Thames’ north bank and hides a bloody legacy of torture going back to its founding in 1066. You’re likely to see the ghosts of Henry VI, Margaret Pole, Lady Jane Grey, and the illegitimate Princes Edward V and Richard, who were murdered and hidden beneath a staircase. Ann Boleyn famously walks the grounds where she was beheaded in 1536 with her head under her arm. In addition, several guards have witnessed other-worldly apparitions, including one beefeater who died of fright in 1816 after being attacked by a spectral bear. Even the spectators at the Countess of Salisbury’s execution linger here, still shocked by the many cuts of her inexperienced executioner.

Related: Heads Will Roll: 8 Restless Ghosts of the Tower of London 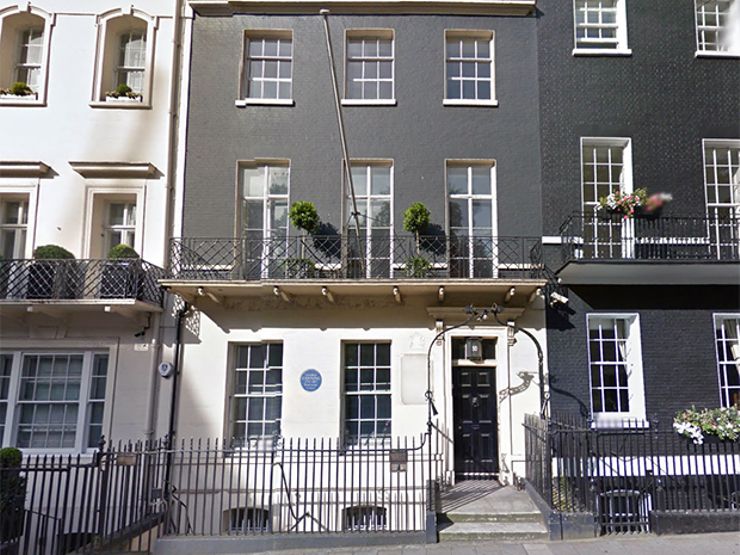 The four-story, brick townhouse at Number 50 Berkeley Square in Mayfair was constructed in the late 1700s for Britain’s Prime Minister. After his death, an elderly woman lived there, and it was then rented in 1859 by an eccentric Mr. Myers. After being jilted at the altar, he slowly went mad, and Number 50 fell into disrepair. Rumor spread of an attic room haunted by a tortured youth, murdered child, or monstrous man. Soon, legends abounded of maids and soldiers alike going mad after staying in the house. In one story, two sailors who entered the home unaware of its reputation awoke to a monstrous presence and fled, but one tripped and died from head trauma. By 1998, 50 Berkeley Square was both the oldest unaltered building and most haunted house in London.

This story was first published on The Occult Museum.
Read More:
Woman in White: 5 English Female Ghosts and the Legends Behind them
Without a Trace: 7 Spooky Disappearances that Remain a Mystery
911 Operators Describe the Most Disturbing Calls they’ve Ever Taken

Want more haunted places? Sign up for The Lineup’s newsletter, and get the strangest tales delivered straight to your inbox.