12 Haunted Hotels from Around the World

Spend the night at these eerie inns, where the restless spirits of murder victims and suicidal lovers still roam the halls.

Hotels are eerie sites–steeped in history and surrounded by local legend. As guests come and go, they leave their mark on the place. Yet reports indicate that some ghostly lodgers never check out.

From a drug-fueled murder at New York’s famed bohemian haunt to Colombia’s suicide hotspot at a deserted cliffside lodge, join us as we step inside the 12 creepiest hotels from around the world. 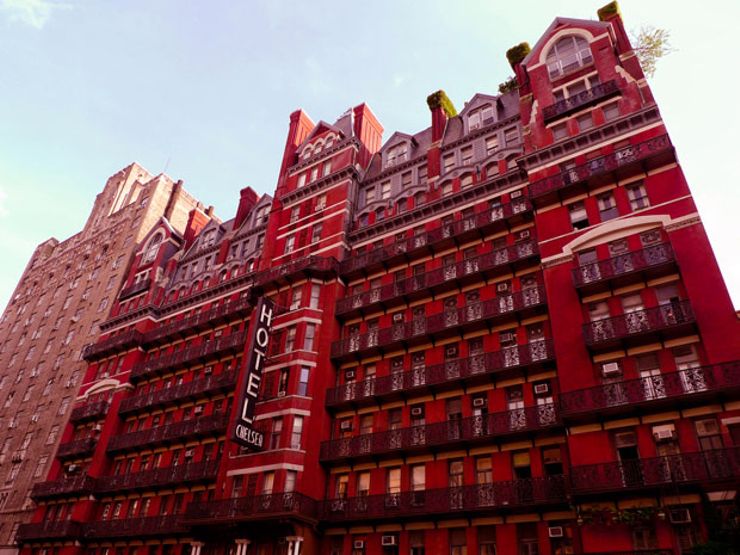 Built in the late 1800s, Hotel Chelsea is a designated NYC landmark that’s currently undergoing renovations. It was a popular hotel among artists, musicians, and actors. Sex Pistols member Sid Vicious stabbed and killed his girlfriend, Nancy Spungen, in a drug-induced frenzy—and her spirit is said to have never left. It also remains to be seen if construction will disturb the ghost of Dylan Thomas, who spent his final days in room 205.

Opened in 1909, Seattle’s Sorrento Hotel was a testament to the booming heyday of the Pacific Northwest. Today, avant-garde figure and partner of Gertrude Stein, Alice B. Toklas, is said to roam the halls of the fourth floor and move glasses on the bar. Alice is also credited with inventing the pot brownie, so it’s safe to say her ghost is pretty chill.

While this isolated mountain hotel served as the inspiration for Stephen King’s The Shining, its eerie history goes back much further. In 1911, a lantern explosion left chief housekeeper Elizabeth Wilson with her ankles broken. Although she survived the accident, her benevolent ghost supposedly remains in Room 217. Guests report being attended to without asking (clothes get folded, and bags are unpacked). Sounds like room service sans a call to the concierge. 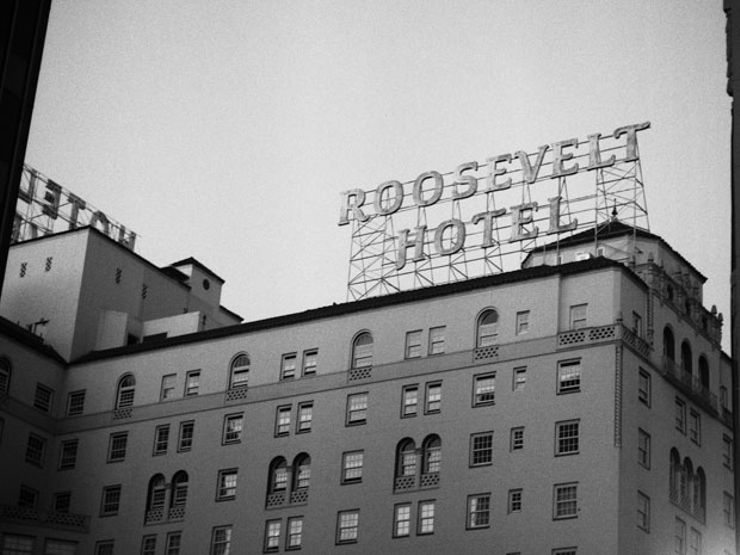 At the Roosevelt Hotel in Hollywood, even the ghosts are superstars. Marilyn Monroe was a frequent guest, often staying in poolside suite 1200. The full-length mirror she used in the room is said to reflect her ghostly figure. It now resides in the hotel lobby so that modern day guests can try to catch a glimpse of the blonde bombshell while gazing into their own visage.

The town of Saint Bathans, in far south New Zealand, was once the site of profitable gold and coal mining. As many migrated to the area, they often stayed at the Vulcan Hotel, which is currently a public house. One prostitute from the era, known as “The Rose” was allegedly strangled to death in Room 1. She is known to boil water for tea and loot gin from the liquor shelf.

La Dame Verte (“The Green Lady”) was killed in a double murder in the 15th century at this Loire Valley estate. She continues to shuffle through the rooms, at time frightening guests while appearing in her signature green dress. It’s been reported that when she looks directly into your eyes, you will see her face is devoid of eyeballs or a nose. 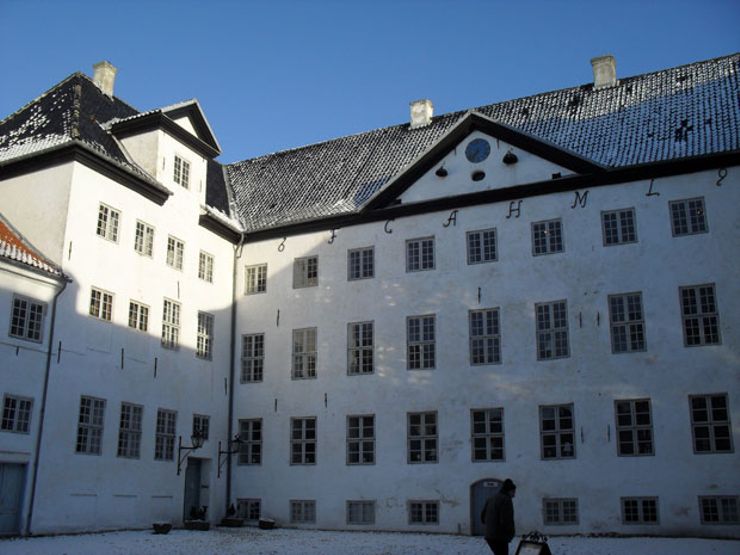 The Danish castle was built around 1215 and was home to many kings and nobles. Today it is a hotel haunted by a peculiar trio – the gray lady, the white lady, and James Hepburn, the Earl of Bothwell, who was captured by the Danes and kept in the cellar. The gray lady is a rarely seen former maid who continues to check in on the order of things. The white lady was the daughter of a former castle owner imprisoned by her father for having a clandestine love affair; she now listlessly wanders the halls. Freed from his cellar prison yet unable to leave, the Earl can be seen or heard riding his horse through the courtyard every night.

From the outside, Portugal’s Victorian-style villa in Portimão is a thing of beauty. Yet within, darker things await. Legend has it that the daughter of the building’s original owner died in Room 108 and has never been able to leave. At night she can be heard banging the walls and moaning uncontrollably, looking for some way to cross over.

Charlotte is the resident ghost of the Nottingham Road Hotel, in South Africa’s KwaZulu Natal province. The site has been an inn for decades — often accommodating British soldiers. Charlotte is said to have been a beautiful prostitute who fell madly in love with one such soldier. Upon hearing of his death, she killed herself and continues to search for her gentleman caller. 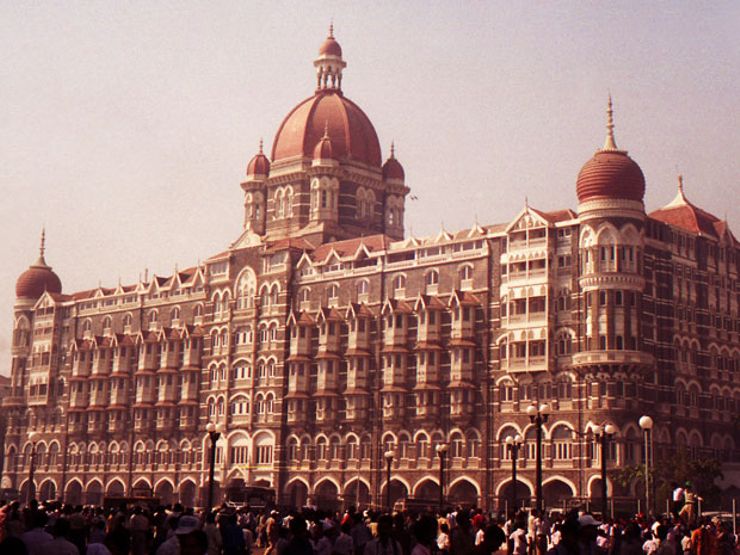 India is certainly akin to mysticism and Mumbai’s Taj Mahal Hotel is no exception. The hotel is reportedly haunted by W. A. Chambers—an English engineer who was part of the team that erected the building in 1903. He created the blueprints, took a trip to England, and eventually returned to find that the hotel was built facing the opposite direction than the one he’d wanted. Distraught, he threw himself from the fifth floor, and continues to safeguard the structure he loved so dearly.

In Japanese culture, a visit from the ancestors is usually welcome. But not at Akasaka Mansion, where the ghosts are undoubtedly tortured and their origins in the living world remain unknown. Guests at Building 1 have reported fingers running through their hair and over their genitals, being pinned down to the mattress getting pushed and dragged from their beds, and having their backs scratched raw. There is also a cool white mist that hovers at the ceiling and travels through the air vents. 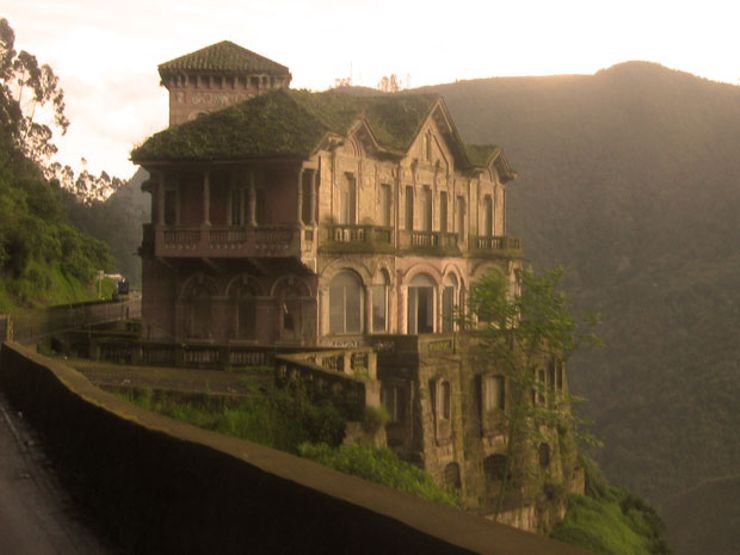 This once luxurious hotel is no longer taking guests, as it fell into ruin by the ‘90s. It was once a popular lodging point for visitors to the Tequendama Falls, which it overlooks. Since its decline, it has become a hotspot for suicide, with people jumping into the river depths below, only to return up the cliff to the hotel, where their souls supposedly remain.

Featured Still from "The Shining" via Warner Bros.