American Seance: The Strange Visions of the Fox Sisters

On a cold night in upstate New York, Kate and Margaret Fox convinced their mother they could see ghosts.

The birth of America’s Spiritualist movement can be traced back to a quiet hamlet in rural New York and the popping joints of two little girls.

In 1848, sisters Kate and Margaret Fox of Hydesville, New York decided to play a prank on their superstitious mother. The creaky farmhouse in which they lived was spooky enough, and rumors ran throughout their upstate community that a murder had occurred on the property, with the body still buried in the cellar.

Margaret was 14 at the time, sister Kate just 11. The sneaky sisters began by tying strings around apples, and at night, they bounced the apples along the stairs, producing eerie thumps that echoed through the home. As the prank continued, their repertoire expanded to the cracking of their big toe joints to produce a sharp ‘rapping‘ sound.

Mother Fox, bless her heart, never suspected her daughters; they were innocent children, after all. The strange sounds had to be a ghost.

On the evening of March 31, Mrs. Fox lit a candle and searched the darkened home for her spirit; she ended in her daughters’ shared bedroom. Margaret and Kate now had two options: fess up and face the consequences, or commit to the ghost story.

They chose the latter.

Peering into a darkened corner, Kate addressed the spirit. “Mr. Split-Foot,” she said, “do as I do.” She clapped her hands four times. Four raps responded.

Mrs. Fox, terrified, asked the spirit to count to 10. The appropriate number sounded. She then asked the spirit to reveal the number of children she had borne and the ages of each. For each question came the correct answer. Her final query: if I were to call our neighbors, might you talk with them?

News quickly spread of the mysterious Fox sisters and their ability to communicate with the dead. When elder sister Leah, a 33-year-old divorcee living in Rochester, learned of their talents, she immediately appointed herself manager and took the sisters on tour. Leah whisked her siblings to Syracuse, then Albany, then sailed down the Hudson River to New York City. There, the Fox sisters conducted hundreds of séances for the city’s cultural elite, including James Fennimore Cooper, Sojourner Truth, Evening Post editor William Cullen Bryant, and New York Tribune publisher Horace Greenley. 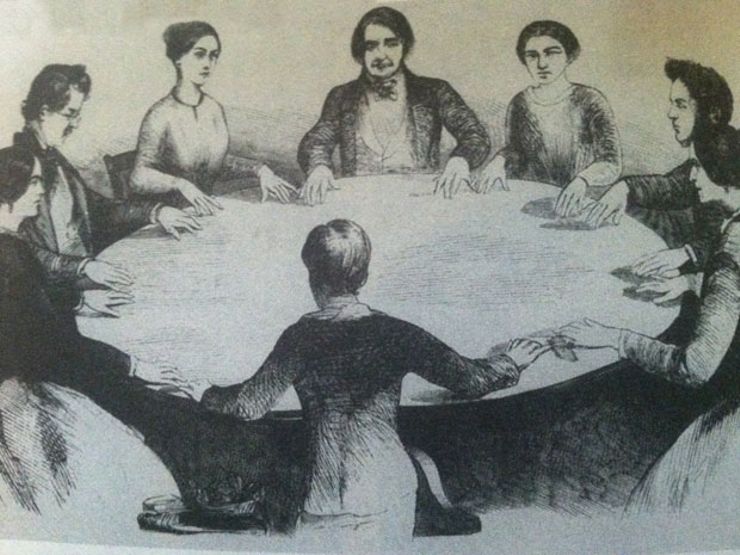 By 1850, the Fox sisters were not just the toast of Manhattan; they were luminaries of the American Spiritualist movement.

Fame, sadly, proved too heavy a burden. All three sisters soon developed heavy drinking problems, and Leah’s control over her siblings grew more extreme. Meanwhile, the nation’s obsession with Spiritualism triggered an explosion of flashier mediums, and the Fox sisters became old news. In 1888, Margaret, estranged from the others, accepted $1,500 from a reporter to admit that her life as a medium had all been a lie.

On October 21, Margaret stood before a packed house at the New York Academy of Music and demonstrated every supposed deceit performed during her séances, including the signature ‘rapping’ of her popping toe joint. She concluded the evening by denouncing Spiritualism as “the greatest curse the world has ever known.”

With that, the world promptly turned its back on the Fox sisters. Though Margaret later withdrew her confession, it did little to salvage their careers. Within five years, all three women died of alcoholism, buried in pauper’s graves.

The Twist: Years later, a group of children were playing in the ruins of the Fox homestead. In the cellar they found a crumbling wall, and behind it, a human skeleton. Doctors examined the remains and estimated that they were well over 50 years old, lending credence to the ghost story that first inspired Kate and Margaret.  Perhaps Mr. Split-Foot had been there all along.