The Creepy Legend of Emily’s Bridge

Some say when Emily's lover stood her up, she flung herself off the bridge to her death.

Like all great ghost stories, the Legend of Emily’s Bridge, in Stowe, Vermont, has many different versions.

Some say a young woman named Emily was stood up at the altar by her fiancé, and fled from the church in anger on her family carriage. Not paying attention to where she was going, she crashed the carriage into the creek underneath what used to be known as Gold Brook Bridge, killing herself and her family’s horses.

Others claim Emily hoped to meet her secret lover at the bridge, so that they could elope. When he didn’t show, she flung herself off the bridge into the waters below, drowning to death.

And finally there’s the tale of the young woman who became pregnant out of wedlock, and, in desperation, hanged herself from the rafters of the covered bridge.

Related: What Lurks Beneath Bunnyman Bridge?

But one local reporter says she simply made it all up. In the 1970s, Nancy Stead was horrified when creepy stories of witchcraft near the bridge made it a popular gathering place for curious tourists and locals alike, leading to loud parties and unsafe swimming conditions.

“The girls were buzzing about witchcraft and covens, and we said we should probably tell them about this bridge, and this girl Emily who died there,” Stead said. “Each of us would add our own line to the story, and boom, it just took off and went crazy. But it was just made up.”

The only problem with Stead’s story is that disturbing paranormal activity has been reported at Emily’s Bridge since the 1960s. 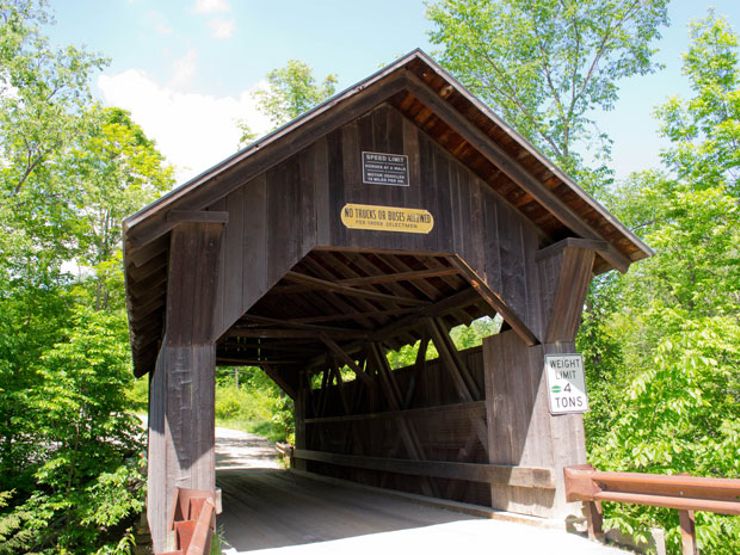 Others have spotted a white apparition floating nearby the bridge. Photographers and videographers have noted the presence of large white orbs in footage shot near or on the bridge, as well as unexplained figures and shadows. In one particularly chilling video, there appears to be a figure hanging from the roof of the bridge.

Related: 7 Most Haunted Tunnels In The World

Those brave (or oblivious) enough to walk under Emily’s Bridge have reported an ominous feeling of being watched, hearing the sounds of a rope tightening and stretching, and even the disembodied sound of a woman’s screams. Some unlucky people have been scratched by an unseen presence under the bridge, emerging with bloody marks on their backs and arms.

The eerie phenomena surrounding Emily’s Bridge has been so unsettling that some locals refuse to cross the bridge, and even go well out of their way to avoid it. What would you do, if you came across this picturesque covered bridge? Are you brave enough to make it to the other side?