Vanished into the Night: The Unsolved Disappearance of Dorothy Forstein

In 1942, Dorothy Cooper married her childhood sweetheart, Jules Forstein. Jules was a clerk in the Philadelphia City Council and the widowed father of two girls: infant Marcy, who would grow up considering Dorothy to be her mother, and 10-year-old Myrna. Dorothy and Jules’ marriage was a happy one. The couple moved into a three-story brick home at 1835 North Franklin Street. Just two years into the union, Jules was promoted to city magistrate; soon after, Dorothy gave birth to a son, Edward.

Related: Michigan Murders: The Heinous Crimes of the “Ypsilanti Ripper”

Then, on the evening on January 25, 1945, strange clouds gathered. Dorothy left her three children with a neighbor and went shopping while Jules was working. Along the way, she stopped to talk with friends and the neighborhood butcher. As soon as Dorothy returned home and walked through her front door, an intruder leapt from an alcove beneath the front stairs and launched a brutal attack. Dorothy was pummeled by fists and a blunt instrument until she was knocked unconscious. While falling, she banged into the hallway telephone and sent it clattering to the floor. A concerned operator at the other end of the line called the police. 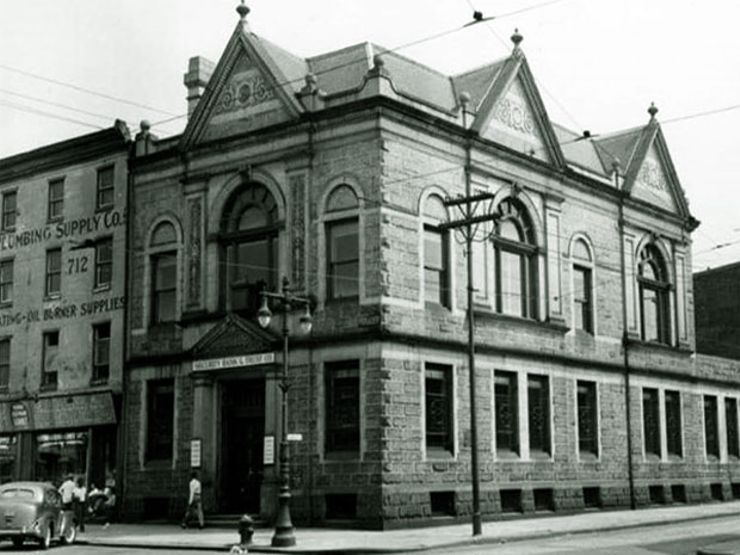 When authorities arrived at the Forstein home, they found a bloody and battered Dorothy lying on her back. She had a concussion, a broken jaw, a broken nose, and a fractured shoulder. She was taken to the hospital and only managed to utter one sentence in transit: “Someone jumped out at me … I couldn’t see who it was … he just hit me and hit me.”

Philadelphia Police Captain James A. Kelly viewed the attack as attempted murder and meticulously retraced the event. With no other visible motive (no money, jewelry, or anything else had been stolen), Kelly was convinced that it had been an “intent to kill.” Police conducted a routine investigation of Jules Forstein but found his work alibi completely solid; as a magistrate, several people could account for his whereabouts. No one in the area disliked Dorothy Forstein nor had reason to harm her. Any hope of finding the perpetrator soon fizzled out and the attack case went cold.

Dorothy suffered greatly in the aftermath of her assault. She was anxious and apprehensive, jumping at the slightest noise. And though new locks were added to the doors and windows of her home, she still checked and rechecked them repeatedly. In addition to the emotional trauma, her damaged shoulder would fall out of its socket several times a year.

Jules rarely left Dorothy or their children home alone any more. He scanned his memory for anyone that might have wanted to retaliate against him for his judicial work, but could think of no one. 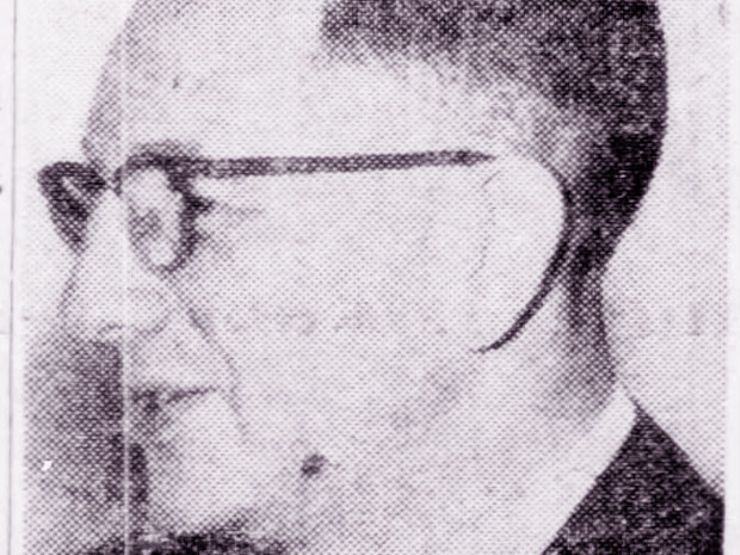 Four years after the attack, on the evening of October 18, 1949, Jules readied himself for a political banquet. He would be leaving straight from work, and phoned Dorothy to inform her that he didn’t expect to be home too late. She jokingly replied, “Be sure to miss me!”

At around 11:30 that night, Jules returned home to find his two youngest children, Edward and Marcy, huddled together in a bedroom, crying: “Mommy’s gone!” The eldest daughter, Myrna, was away visiting friends.

Related: An American Mystery: What Happened to Theodosia Burr?

Jules initially thought that his wife may have gone to a neighbor’s house. But after hours of checking and making phone calls with no result, he alerted the police. Captain Kelly returned to the Forstein residence. He ordered his men to search every hospital in Philadelphia, as well as the hotels, rest homes, boarding houses, and the morgue. They found nothing. Dorothy had left her keys, purse, and money at home, and the front door had been locked. The most concrete lead the police unearthed came from young Marcy. Through tears, she recounted:

“I woke up and it was late. I don’t know whether I heard voices or whether I just woke up. I went to the head of the stairs and there was a man coming up. He went to Mommy’s room in the front, and through a crack in the door, I could see her lying on her face on the rug. She looked sick. The man turned her over on her back and picked her up. He put her over his shoulder so her head hung down his back. When I asked him what he was doing, he said: ‘Go back to sleep, little one, your mommy has been sick, but she will be all right now.’” 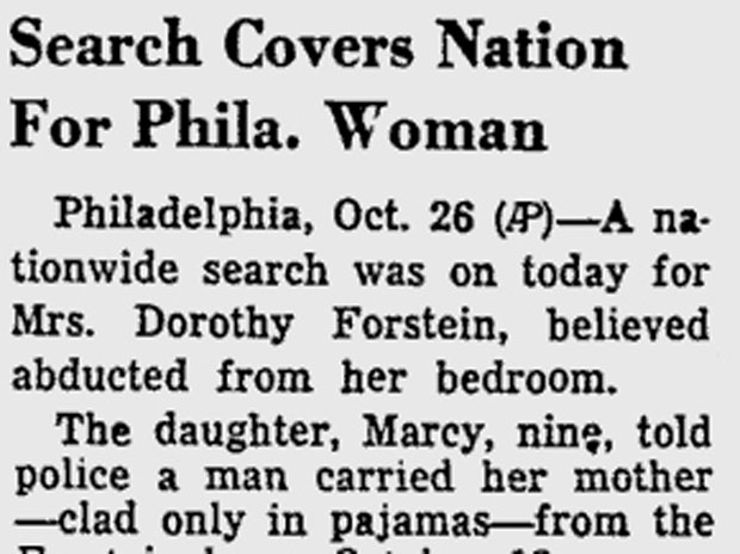 Captain Kelly asked Marcy how her mother had been dressed, to which Marcy replied, “She had on her red slippers and her red silk pajamas–the ones she liked because they were so pretty. She didn’t say anything.” Marcy went on to describe the man she had seen in the house. She said that he had been wearing a brown cap with a peak, and a brown jacket with something stuck in his shirt. Marcy insisted she had never seen the man before, but that he was probably “about the same age as Daddy.”

Related: Blood on the Kitchen Floor: The Unsolved Disappearance of Joan Risch

Marcy’s explanation is the only clue that Philadelphia Police ever had following the vanishing of Dorothy Forstein. Not only was the house otherwise undisturbed, there were no fingerprints to be found. Police saw this as odd, for surely a man carrying a woman on his shoulder would have touched a wall or a banister to keep his balance. Police also questioned how anyone hauling a motionless, pajama-clad woman could walk outside without arousing suspicion. Lastly, the question of how the man had entered the house (since the lock had not been compromised) still remained. An 11-state alarm was issued to search for the missing 40-year old Dorothy. She was never found.

In the years since Dorothy’s apparent abduction, multiple amateur and professional sleuths have attempted to crack the case. One particular theory is perhaps the most sensible, and concerns a 29-year old textile salesman named Morris Anmuth. 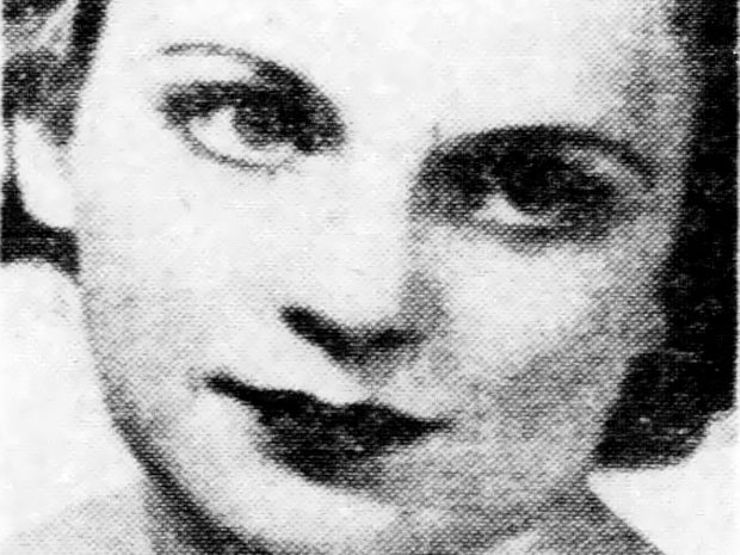 In September 1944, a crowd had assembled in Philadelphia to protest then-Republican Presidential Candidate Thomas E. Dewey as he prepared to make a speech at the Pennsylvania Railroad Station. Two Philadelphia policemen, James McCarthy and Samuel Ralston, saw Anmuth and perceived his mannerisms to be threatening. They pulled him out of the crowd on charges of inciting to riot, resisting arrest, and disorderly conduct.

Anmuth was fined $10, but he countered it by filing assault and battery charges against the two officers, claiming they beat him for nearly 20 minutes. McCarthy and Ralston were originally held on $1,000 bail each by Magistrate James McBride. However, the charges against the officers were later dropped by none other than Magistrate Jules Forstein. It has been theorized that Anmuth was the man who attacked Dorothy in 1945, retaliating against Forstein for his lenience with the officers–and that Anmuth was also the man who abducted Dorothy.

In 1957, President Judge Charles Klein of the Orphans Court stated that Dorothy would be declared officially dead as of October 18, 1956, seven years after she vanished, and just months after Jules Forstein died of heart disease. Judge Klein’s decision was based on a petition filed by Dorothy’s stepdaughter, Myrna. Captain David Roberts of the Philadelphia Homicide Squad concurred that all efforts of police and private investigators had failed to discover a trace of the missing woman.

To this day, the disappearance of Dorothy Forstein remains unsolved. For those interested in unraveling the mystery, check out this Facebook group dedicated to the Forstein case, created by author Gary Sweeney.