An eight year old is killed ... and the murderer is never found.

The town of Wauwatosa, Wisconsin, due west of Milwaukee, is known as “the city of homes.” Its quiet streets are dotted with schools, parks, and charming family dwellings. But on hot late-July day in 1925, this quiet suburb was rocked by the murder of young Arthur “Buddy” Schumacher, Jr.

Buddy Schumacher was described as a kind-hearted child with a cheery disposition. On the morning of July 24, 1925, Buddy left home with friends. They were headed to a local watering hole where kids played and swam during the hot summer months. The carefree group hopped a freight train to get there. Three of his companions reported seeing him jump off the train with the others. That was the last sighting of Buddy alive.

Want more unsolved murders? Sign up for The Lineup’s newsletter, and get our eeriest tales delivered straight to your inbox.

Buddy didn’t return home that day. His parents Art and Florence and older sister Jeanette were dumbfounded. A search party was formed. For weeks, authorities and locals looked high and low, but turned up nothing. Then, strangely enough, on the seventh week, a body was found one mile away from the Schumacher’s home. The corpse was badly decomposed, but it was identified as Buddy. The details were horrific. There was evidence of mutilation and sexual abuse and a handkerchief was discovered deep in the back of Buddy’s throat. Suffocation was likely the cause of death.

The local and state media covered all the details, including the viewing at the home, which featured a photo of the casket leaving the Schumacher residence and a headline that read Bid Schumacher Boy Farewell. With all the local interest and media attention in the case, one would assume the culprit would have been quickly brought to justice. Yet, more than nine decades later, the crime remains unsolved. There was never any closure for the Schumacher family as the murderer was never found.

It wasn’t for lack of trying. Police followed leads but nothing amounted to a conviction. There was an area drifter who was accused and arrested in connection with the murder. Two mentally challenged men also reportedly confessed to the crime, though police initially didn’t believe either person. No charges were brought against any of the men. Evidence, specifically the handkerchief, was likely mishandled. At one point, the telltale fabric was missing from the district attorney’s office. Witnesses also retracted their original statements regarding the accused drifter.

Buddy’s family and relatives spoke little of the tragedy. Two years after Buddy’s death, they moved out of the family home. A new family, the Hoffmans, moved in and the son Paul Hoffman would later renew interest in the cold case with his book, Murder in Wauwatosa: The Mysterious Death of Buddy Schumacher. The author recounts growing up next to the Schumachers' neighbor, Lillian Harwood, who would often be heard saying, “I know who killed the Schumacher boy.” In his youth, Hoffman chalked it up to nonsensical talk, as Mrs. Harwood was known to behave erratically. She also claimed it happened near the Menomonee River around Hoyt Park and that the police knew who the killer was.

Related: Face on the Milk Carton: What Happened to Johnny Gosch?

As Hoffman got older and discovered the chilling details surrounding Buddy’s death, he set out on a fact-finding mission. He interviewed family members, including Buddy Schumacher’s sister’s children, Keith and Brian Egloff. He pored over census data, old newspapers, and more. After years of research, Hoffman claims he came come to his own conclusion about who the killer could have been. He doesn't wish to share his theory however. "I think I know who committed the murder," he told On Milwaukee. "I don't think that after all this time, there's a way to prove it, though. So, it will just have to stay an educated guess based on the facts presented ..."

Indeed, it's too late to bring a culprit to justice—most evidence is lost to time and it's quite likely that the perpetrator has passed on.

Perhaps the Schumacher family can find some kind of solace in this.

“Looks at the twists and turns in the investigation, possible perpetrators ... as well as some of the good that eventually came out of this tragedy” (Wauwatosa Patch). 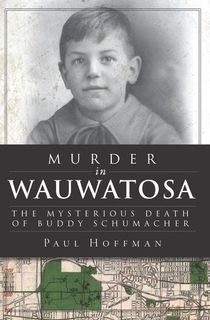 Want more unsolved murders? Sign up for The Lineup’s newsletter, and get our eeriest tales delivered straight to your inbox.

[Via On Milwaukee, Wisconsin History, Wikipedia]