This bronze monument to tragedy is said to bring death to anyone who touches it.

Nestled in a quiet neighborhood near Hickory Hill Park is Iowa City’s Oakland Cemetery. The burial ground is home to numerous monuments to the dead, including one striking statue with a dark reputation—the bronze Black Angel.

The figure dates back to the early 20th century and stands watch over the graves of Teresa Dolezal and her family. Teresa moved to Iowa City with her son Eddie in the late 1800s. There she worked as a midwife until 1891, when Eddie contracted meningitis and died. The boy’s body was buried in Oakland Cemetery and a monument carved in the shape of a tree stump was erected to mark his grave.

Related: 12 HAUNTED CEMETERIES TO VISIT BEFORE YOU DIE

After Eddie’s death, Teresa moved to Oregon where she met and married Nicholas Feldevert. But Feldevert was not long with for this world, either; he died only a few years later in 1911.

Stricken by two losses so close together, Teresa returned to Iowa City and commissioned the construction of an eight-and-a-half foot tall bronze angel from Chicago artist Mario Korbel to memorialize her loved ones. 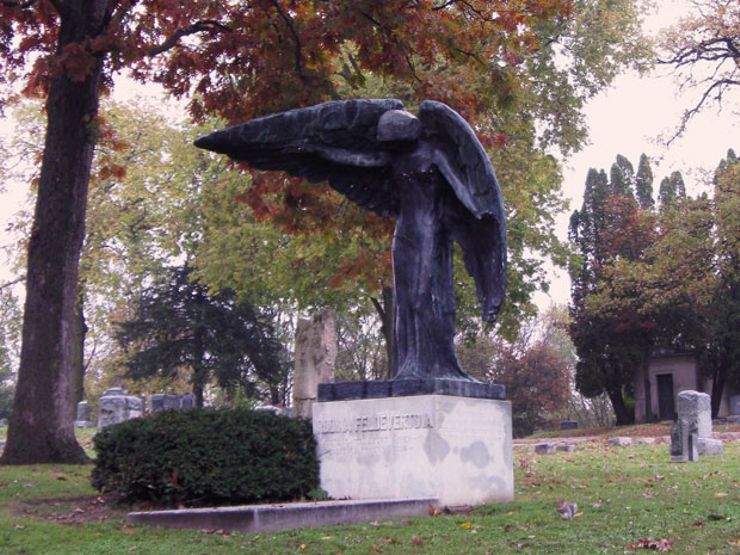 As soon as the statue arrived by train car, stories began to circulate. When the statue was erected in 1913, Eddie’s monument was moved to stand beside it, while the ashes of Nicholas Feldevert were placed within the statue’s base. When Teresa Feldevert passed on in 1924, her ashes joined those of her late husband. Curiously, no death date was added to Teresa’s name at the base, fueling the statue’s mystery.

What’s more, the Black Angel statue had turned from bronze to black by the time of Teresa’s death. Local legends sprang up to explain this phenomenon, with most centering on Teresa’s past. Some claimed that she was an evil a mysterious woman, and that the statue changed its color to warn others to stay away from her grave. One particularly dramatic telling told of a thunderstorm on the night of Teresa’s funeral. A lightning bolt struck the angel statue, scorching it black.

Other versions blamed the blackening of the statue on infidelity, claiming that Teresa swore on her husband’s grave to remain faithful until her death—and that the monument would turn black if she didn’t keep her vow. Some even claimed that Eddie Dolezal never died of meningitis, but was murdered by Teresa herself. The angel statue blackened as a mark of her guilt.

Related: 9 STRANGE GRAVES FROM AROUND THE WORLD

Little proof exists to corroborate such claims, and many explain the color change as the natural process of oxidation. Still, the legends persist, with some asserting that the angel’s eyes had turned “black as coal” overnight and the blackness then spread down its face as though the angel was weeping.

With such a reputation, it’s no wonder the Black Angel statue is now said to possess sinister powers. According to one tale, any girl kissed in the shadow of the angel’s wings will die within six months, and anyone who touches the angel on Halloween night will die in seven years. Kissing the angel directly, meanwhile, will cause a person’s heart to stop instantly. One variation states that only a virgin can survive touching or kissing the statue without being struck dead. Another claims that the angel itself gets down from its pedestal and walks the cemetery at night. 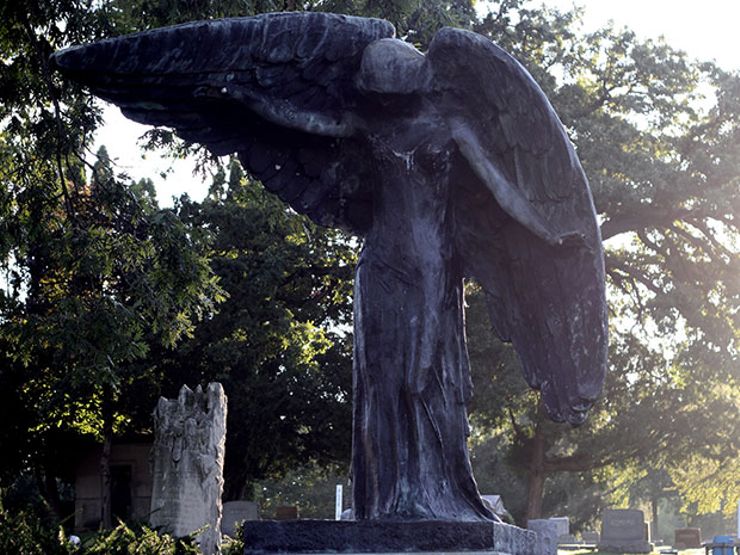 In 2013, the SyFy Channel series Haunted Highway visited Oakland Cemetery to do an episode on the Black Angel, which aired on December 18. Investigators capture odd sounds and visual anomalies throughout the cemetery. When they turned their thermal cameras on the Black Angel statue, they found that it showed up as glowing hot, even though the night around it was chilly.

Whatever the truth of the many legends, there’s no doubting the Black Angel’s power as a monument. Several months ago, I visited Iowa City, and made it a point to walk through Oakland Cemetery. The grounds were beautiful, tucked away behind quiet streets lined with distinctive homes.