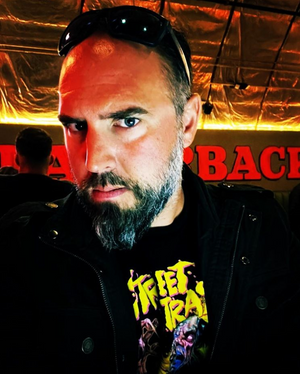 Brian Asman is a writer, actor, director, and producer from San Diego, CA. He’s the author of the hit indie novella Man, Fuck this House (recently optioned by a major streaming service). His debut novel Good Dogs is forthcoming from Blackstone Publishing.

His other books include I’m Not Even Supposed to Be Here Today from Eraserhead Press, Neo Arcana, Nunchuck City and Jailbroke from Mutated Media, and the upcoming Return of the Living Elves. He’s recently published short stories in Pulp Modern, Kelp, and Lost Films, and comics in Tales of Horrorgasm.

A film he co-wrote and produced, A Haunting in Ravenwood, is available now on DVD and VOD from Breaking Glass. His short “Reel Trouble” won Best Short Film at Gen Con 2022 and Best Horror Short at the Indie Gathering.

Find him on social media (@thebrianasman) or his website www.brianasmanbooks.com.

Will we ever know?

Interstitial Scares: Real Horror Lies in the Spaces In Between

What's growing in the shadows?

Genre is a flat circle.

The Best Debut Horror Novels of 2022