We will never look at elephants the same way again.

Get ready, AHS fans! Your favorite show will return in all its gory, campy glory this September—and creator Ryan Murphy just gave us our first peek at the villain of season 7. Take a good look at Murphy’s little monster below:

Photogenic, isn’t he? One thing is certain: We’ll never look at Dumbo the same way again. But after canceling our yearly membership to the zoo, we started thinking about the season ahead. How might this demented pachyderm fit into the AHS universe?

Given that Murphy reportedly drew inspiration from the 2016 election for the upcoming season (an idea described as “batsh*t” by producer Tim Minear), we can’t help but see a deeper meaning behind the elephant’s malicious smile and black-pit eyes…

So we put together some American Horror Story predictions below. While they’re a bit, shall we say, out there, we also know that there’s no such thing as crazy when it comes to Ryan Murphy’s twisted monster of a show.

1. Prediction: The demonic elephant head is the symbol of a Purge-like organization in league with the Republican Party.

2. If there is a sinister organization, who’s the founder? A descendant of the Mott family, of course!

Back in 2016, Murphy told Entertainment Weekly that season 7 would cross over with Freak Show. Since insanity runs in the Mott family line, we’re thinking they may have a hand in the horror. Billy Eichner, confirmed to appear this season, could pass for a relative of Finn Wittrock’s Dandy Mott from Freak Show…

Related: Here’s the “american Horror Story” Character You’d Be Based on Your Zodiac Sign

3. …And if that’s the case, then the creepy elephant is likely inspired by Twisty the Clown. 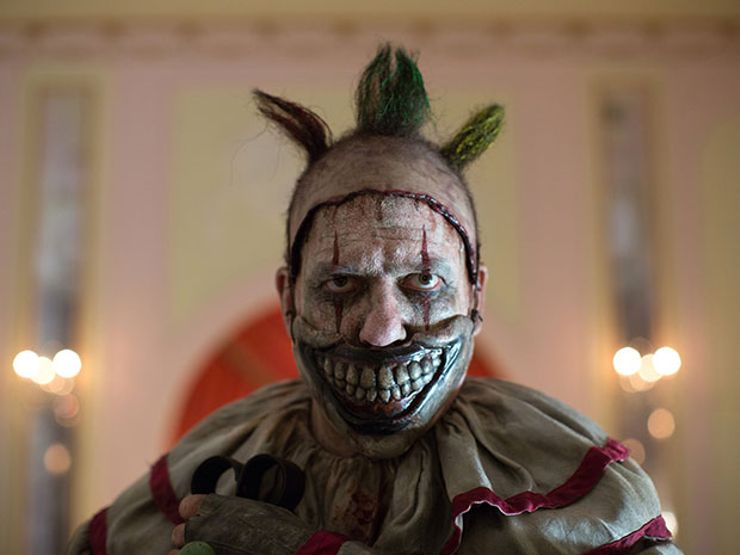 Before he was killed, Dandy Mott gleefully donned Twisty’s mask and went on to massacre most of the freak show troupe. It only makes sense that one of his equally demented descendants would hero-worship the creepy clown and want to continue the legacy.

4. If there is a sinister organization, they may target “outsiders”—or anyone who doesn’t agree with them

Dandy, after all, hated the freaks. This would be yet another politically charged statement from Murphy. It would also open the door for more Freak Show-related characters. At the end of season 4, we saw a pregnant Bette and Dot (Sarah Paulson) watching television with their new husband, Jimmy Darling (Evan Peters). It’s reasonable to assume that their combined peculiarities would be passed down to future generations—thus making their children or grandchildren targets of the organization’s prejudiced terror.

5. In fact, season 7’s opening scene could parallel that final scene between Jimmy and the conjoined twins.

Murphy has stated that the first 10 minutes are set on election night, and something “terrible happens” as its characters are “watching it all go down.” Clips of Trump and Clinton are rumored to be included. Could it be that one of these characters is the aforementioned descendant of Bette, Dot, and Jimmy? And, instead of watching Elsa’s Halloween special like their parents, they’re watching something even spookier—the election results? It would be the perfect, Murphy-esque callback to a previous season.

So what do you think will happen in season 7? Do you agree with us, or do you think we’re totally off base? Let us know in the comments!

Want more horror tv stories? Sign up for The Lineup’s newsletter, and get the creepiest shows delivered straight to your inbox.