Kathy Bates wields a cleaver and Lee makes a deal with a medium—but what is going on with Gaga?

Good news AHS fans: it looks like things are picking up a bit after last week’s lackluster episode. Last night, we saw Shelby, Matt, and Lee finally come face-to-face (well, sort of) with the Roanoke colonists haunting their home. Though the storyline is still lagging, we’ve finally tapped into a new, freakish AHS universe, which, flawed though it might be, reminds us why we started watching this series in the first place.

Let’s first break down a few key points from episode 3:

The Polk family hillbillies have fled the scene. They left behind a rotting house, and two feral-looking boys, who can only say one word: CROATOAN. Of course, CROATOAN was the one word-clue left by the real-life Lost Colony of Roanoke, carved into a fence post surrounding their completely abandoned village.

Flora is being held in the Roanoke spirit world, by her evil demon friend from last week, Priscilla. This news comes to us from the Bilbo Baggins-meets-Andy-Warhol-looking medium, Cricket, who conveniently shows up on Matt and Shelby’s front doorstep.

We got an excellent backstory for Kathy Bates’ “The Butcher,” A.K.A. Tomasyn White. John White and his wife Tomasyn, by the way, were real-life Roanoke colonists, and John was, indeed, the governor of the Lost Colony. That’s about where the similarities end. It’s OK, though: We much prefer Kathy Bates’ skull splitting to whatever Tomasyn White might actually have been doing back in the 1500s.

Flora’s dad, Mason, has been burned to death, presumably by the colonists, though the culprit might have been Lee. Matt’s sister was clearly out of the house during the night, as Matt’s video surveillance shows. We suppose she would have reason enough to kill Mason—as Shelby points out—but given the colonists’ penchant for burning people alive, it seems unlikely that she was behind his horrific death. This doesn’t stop Shelby from turning Lee over to the authorities in the episode’s final moments, after learning that Matt and Lee had conspired behind her back to burn the home down if the colonists safely returned Flora.

The fourth wall has been broken! When the “documentary” cameraman asks Lee about her first daughter, who vanished, Lee asks for the cameras to be turned off. We then get a behind-the-scenes look at the whole mockumentary setup. There’s reason to believe we’ll be getting a lot more wall-breaking in the future, as will be discussed further down. Furthermore, for all you in the “Where the Hell is Evan Peters” camp, did the cameraman’s voice not sound suspiciously like…well, Evan Peters’?

Ok, now onto our burning questions:

1. Where was that $25K Lee paid to Cricket when Matt and Shelby were penniless, with no way to move out of the house?!

More of a plot hole than a serious query, but come on! We’re supposed to believe that Lee had cash like this lying around the whole time, and didn’t think to, oh, we don’t know, lend some to her totally broke brother, so he could flee his clearly ghost-infested home?

2. What in God’s name is going on with Lady Gaga’s character?

Is she a witch? A wood nymph? Just your run-of-the-mill weirdo who likes hanging out in the woods, eating human hearts, and screwing random men? Also, kudos to Kathy Bates for going full-tilt Khaleesi and chowing down on that heart. 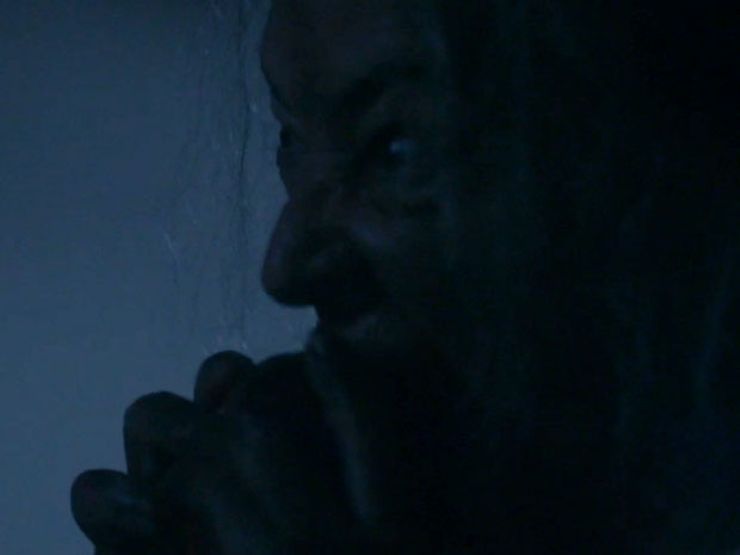 3&4. What does the rest of this season hold in store?

We’re combining questions three and four because this one is really, really big. Last week, Ryan Murphy told Entertainment Weekly, “You’ll see starting in episode 6, the show has a huge turn and the thing that you think you’re watching is not what you’re watching.” Co-creator Brad Falchuk, as well as actors Sarah Paulson and Cuba Gooding Jr. all echoed this statement in various interviews. The gist: our minds are going to be completely blown come episode 6.

Of course, fan theories have been running rampant ever since the show began—is Roanoke really the theme, why don’t we have opening credits, etc.—but this takes it to the next level.

One theory, dreamed up by Redditors and outlined in Vanity Fair, suggests that all episodes so far have been corresponding to the different seasons of the show. In the first episode, Matt and Shelby move into a new, haunted home, reminiscent of the couple from season one. Episode 2 focused on crazy, murderous nurses, which had a distinctive “Asylum” vibe. This week, Leslie Jordan returned to the show as Cricket. He hasn’t been on since season 3, “Coven.” If this pattern continues, we’ll likely get “Freak Show” overtones next week, and “Hotel” the week after. Then we get to episode 6, where, apparently, the whole AHS world as we know it will come crashing down around us.

Ryan Murphy has told us, repeatedly, that all the seasons are connected. Will episode 6 of season 6 get uber-meta, and take us all the way back to season 1? As mentioned last week, there are theories floating around that Billie Dean, the medium from season 1, might be the mastermind behind this whole “documentary.” This comes on top of the fact that there was explicit discussion of the Roanoke Colony, as well as the word “Croatoan” in season 1. Come episode 6, will we find ourselves suddenly whisked back to “Murder House”?

While you’re chewing on that, check out the trailer for episode 4:

So: will we get more of Gaga’s forest demon backstory? What does the rest of season 6 hold in store? As always, tell us your thoughts in the comments.