Flora sees dead people and the colonists have a bloody campfire—but who are these sadistic nurses?

Last night’s episode started out promisingly enough. A colonial-era Kathy Bates—complete with a new, bizarre accent—oversaw a man wearing a pig’s head being burned alive. Among the Roanokean onlookers was none other than Lady Gaga, though blink and you might have missed her. 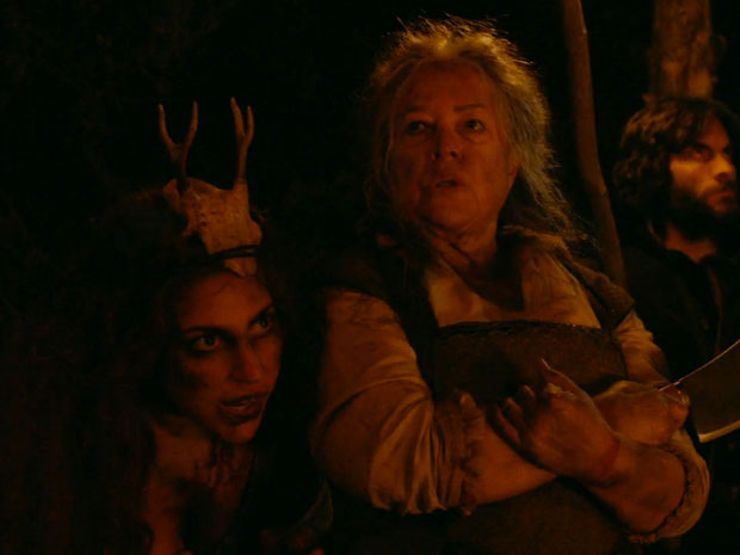 Finally: a depiction of the lost colonists of Roanoke, upon which this season is supposedly centered! This looks fun and creepy!

Aaand, that was the last we saw of them.

The rest of the episode veered, to our dismay, far away from Kathy Bates and her band of bloodthirsty weirdos, and more in the direction of cliched horror tropes.

To start, there’s a moment in every haunted house horror movie when viewers are inevitably yelling “JUST LEAVE THE HOUSE” at their screens. Roanoke‘s Shelby, Matt, and Lee take this to a new level. This, appropriately, leads us to our first burning question:

1. WHY, IN THE NAME OF ALL THAT IS HOLY, HAVE THEY NOT JUST LEFT THE HOUSE ALREADY?

There is no logic behind their decision to stay, not even by the thinnest strand of horror movie logic. Ryan Murphy has drilled it into our heads that Matt and Shelby have invested everything they own into this house, down to their last cent. We even had a scene this week where a bank representative told the couple there was no way they could get their money back.

OK: We will believe that Matt and Shelby are reluctant to leave a home into which they’ve invested all of their savings. What we have a harder time believing is that after a home invasion, constant Deliverance-style pig squealing noises outside the house at night, the discovery of a burning cross covered in pig entrails right outside their front door, and the confirmation that this home once housed two serial killer nurses and their elderly victims, Matt and Shelby wouldn’t even check into a damn motel for the night. Seriously!?

2. Who are these nurses and … do we really care?

These sadistic ladies operated an old age home from Matt and Shelby’s house several decades ago. Well, the old age home was a front; they were really serial killers who murdered their patients. Apparently, the killer pair only accepted patients based on the first letter of their first name. They then killed them chronologically, so they could … spray paint their initials onto the wall in order to spell out “MURDER”.

That’s the impetus driving these vicious killers? They’re not even trying for “REDRUM”?

Compared to the crazy medical professionals we’ve encountered in previous seasons, these nurses are not all that scary or original. Plus, they’re taking away from the Roanoke colonists, who are kind of scary and original. Can we see more of them, please?

[Update: one of our readers pointed out that the nurses are based loosely on serial killers Gwen Graham and Cathy Wood. Read more about them here.]

3. Why would Lee bring her daughter back to this house after all that’s happened?

This leads us to the other non-Roanoke-related plot point: Lee’s daughter Flora’s “imaginary friend,” Priscilla. As soon as Flora arrives at the house, she starts chattering to “Priscilla” who “wears a bonnet” and “wants to kill them all.” Yep: We’re getting the “little kid who is obviously communicating with a demon” plot. After Flora’s dad—apparently the only person in this universe with logical reasoning—takes her away from the house, Lee falls off the wagon, begins drinking again, and, eventually, brings Flora back to the house. Where, of course, Flora promptly vanishes.

Even aside from the discovery of Flora’s invisible demonic friend, Lee has seen this home invaded, most likely by angry hillbillies. She must know about Shelby and Matt’s discovery of the burning pig man in the backyard. Hell, Lee sees a pig man apparition as she’s wandering the halls at night, and it scares her out of her wits. And she somehow thinks it’s a good idea to bring her eight-year-old, back to this house, after the little girl somehow got out unscathed? Geez.

4. Where are the opening credits?

There are still theories floating around that Roanoke may not be the true—or only—theme for this season. Some believe that the “show within a show” format is being used to further link the AHS universe. For example, some Twitter users suggested that Sarah Paulson’s character from season one, the saucy medium Billie Dean Howard, might actually be hosting the documentary My Roanoke Nightmare. Evidence used to back these theories revolves around the fact that there are no opening credits, usually one of the most popular parts of any new AHS season. Unless it’s being withheld for a deliberate reason, the missing opening sequence is a real disappointment for viewers.

That’s it for this week. Before you go, check out the trailer for episode 3:

What do you think? Will we get more of the colonists? Will we find out what happened to Flora? Let us know in the comments.

All still from "American Horror Story" via FX