Aileen Wuornos’ experiences as a lesbian and abused sex worker have led many to consider her crimes as “justified" revenge against the men who wronged her.

But in 1989, Aileen Wuornos proved once and for all that men don’t have the exclusive on serial violence when she became one of America’s most well-known female killers, inspiring the 2003 film Monster, starring Charlize Theron as Wuornos.

Despite her despicable crimes, Wuornos has achieved a revered status among many groups. As a homosexual sex worker, who was allegedly abused by male family members from her earliest days, Wuornos came from an underprivileged background and faced much discrimination. Many see her crimes, twisted as it sounds, as an empowered sort of revenge against men — and, by extension, society — who did her wrong, even if it was just on a symbolic level.

Wuornos went on a year-long killing spree, murdering a total of seven men on prominent Florida highways. Posing as a hitchhiker and often using her position as a sex worker, Wuornos lured her victims to remote locations … before turning on them with a .22 caliber pistol.

Read on for an excerpt of the book and then download it on Amazon, Barnes & Noble, and iTunes. 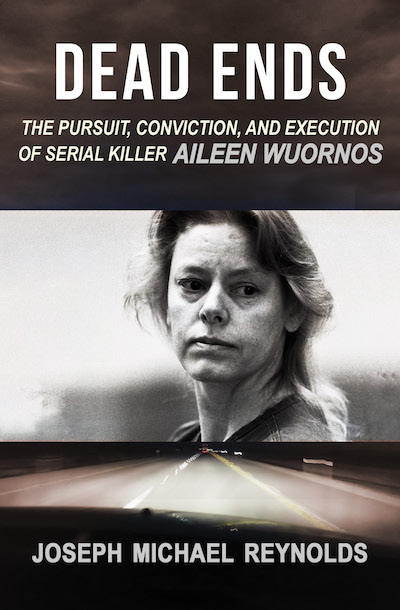 “After the sheriff’s deputy unlocked the restraints holding her thin wrists, she lifted her hands to her breasts, the sleeves of her cranberry-colored jumpsuit sliding down her pale arms as the deputy slipped the chain from around her waist. She looked up at the judge seated at the bench above her and gave him a loopy smile, shuffled a sheaf of notebook paper on the podium facing him, and squinted at the pages.

“… But if I wanted to just go out and kill, there would’ve been hundreds. You see, everyone had taken off for Saudi Arabia, all my regulars, and I had no customers and I had to get strangers …”

“… I’m not a man-hating lesbian who only killed to rob, robbed to kill. This is a downright fabrication, full of fairy tales and very far from the truth, all for a fast buck. A sick and vile made-up horror flick these law-enforcement officers have created. They’ve already set it up for a “real profound box-office hit. I’m fed up with their slanders, libels just so the public would hate my guts for their multi-million-dollar movie deal. Trust me, this movie is a lie!”

“She rambled on, laying the blame for the death sentences on her head at the feet of her family, her ex-lover, her defense team, the cops, the witnesses, the media, the prosecutors, the jury, the Gulf War, pollution, and bad luck.”

“Before I’m strapped in the electric chair, please please listen, for I am speaking the truth … You are going to crucify me, which is exactly what you did. I knew they would lie, cheat, and twist everything around … total defamation and slanders galore. I am not a murderer … by definition, murder is willful killing … I didn’t take their honor cards. I didn’t keep their cars and fence them off. I’m not a serial killer. I’ve killed a series of men but it was in self-defense. It wasn’t premeditated design. My only premeditation was to go out and make another dollar. It wasn’t in my mind to go out and kill a guy.”

“I’m just waiting for my Sherlock Holmes to crack this conspiracy wide open … I hope these no-good cops see prison in the near future. I will seek to be electrocuted as soon as possible. I want to get off the fucking evil planet. I’ve never seen so much evil. I was a nice person, I’ve been treated like dirt … I just can’t wait to leave. I’ll be up in heaven when y’all are rotting in hell.”