Above Suspicion: The Disturbing Story of the FBI Agent Who Strangled His Informant

After strangling his informant—who was pregnant with his child—Mark Putnam became the first active FBI agent convicted of murder.

In the mid-1980s, Mark Putnam was a happy husband, a doting father, and a successful FBI agent. But upon relocating to the bureau's Pikeville office—a Kentucky town tucked inside the Appalachian Mountains—Putnam would add another descriptor to his resume: Killer.

After assuming his new position, Putnam began working with Susan Smith—a drug-addicted informant with valuable connections to a serial bank robber. This professional partnership quickly evolved into a fraught sexual affair and, by 1989, Smith was carrying Putnam's child.

Putnam was terrified and angry. Smith herself became hysterical, reminding Putnam that this pregnancy would not only destroy his marriage but the career he'd worked so hard to build. Smith "owned" him now, she said, which sent the infuriated Putnam beyond his breaking point.

A violent, two minute struggle ensued, in which Putnam strangled Smith to death. He then abandoned her body near a wooded roadside, naked and barely hidden. One year later, he lead the FBI to this very place—an act that lessened his prison sentence to a meager ten years.

In the true crime book Above Suspicion, author Joe Sharkey provides a detailed account of Putnam’s crime of passion, its aftermath, and his eventual confession. Soon to be a film starring Game of Thrones star Emilia Clarke, the murder of Susan Smith is also a landmark case. Mark Putnam—husband, father, killer—is the first active FBI agent ever convicted of homicide.

Go inside Putnam's confession to his wife with this excerpt from Above Suspicion below. 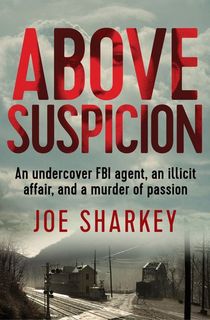 His flight was the last one into Fort Lauderdale airport, arriving around midnight. An after-hours glare harshly lit the faces of the stragglers shuffling past the darkened shops, shut cafés, and unattended ticket counters. Kathy found Mark waiting alone at the far end of a wide, empty corridor.

He started to speak, but she held up her hand and said, “Just don’t talk yet.”

In the car, she suggested that they stop at a Holiday Inn near the airport for a drink. It was a conversation neither of them wanted to have at home, where Kathy’s sister, Chris, was still living with them. Kathy looked straight ahead and lit a cigarette in the car, something she hadn’t had the nerve to do in many years.

It was nearly one o’clock when they walked into the Holiday Inn lounge. At the bar, Kathy ordered a double Black Russian for herself and a beer for Mark. Carrying the drinks, she led him silently to a table in the darkness. Across the room, a four-piece band was playing heavy metal; couples in their twenties, the last gasp of the fading Fort Lauderdale beach scene, danced under lights that flashed like those on a patrol car.

Defiantly, Kathy lit another cigarette and blew the smoke at a point just over Mark’s shoulder. She moved her glass to the side and looked directly at him for the first time that night. She waited.

“This is really serious,” he sputtered.

You’re goddamn right about that, she thought. In a cold fury, she smoked and waited.

Get on with it, she thought angrily.

“Look,” she said in the sarcastic tone of a prosecutor trying to dismiss the ridiculous before homing in on the self-evident. “Did you kill her?” She spat out the words with a street swagger she hadn’t used since she was a teenager.

This was not an answer she had anticipated. She had been expecting a nervous chuckle, a “Come on, Kathy!” “before she probed the painful details and watched him squirm. She blinked slowly, her mind two beats behind the words.

“So you slept with her!”

“And this could have been your baby.” She flung the sentence across the table.

“Just answer the questions! How did this happen?” He kept crying. “Was there a car accident?”

She let out a furious, thin stream of smoke. “It wasn’t a car accident. Did you shoot her?” Her voice was rising. Out of the corner of her eye, she noticed a middle-aged man in a business suit drinking alone at a table a few feet away. He had been casually watching them, with his eye on her. Now he stiffened at what he overheard.

“No. I choked her.” Mark made a feeble little choking motion.

“You choked her,” she said in a sarcastic flat tone. Then her voice rose, her face contorted with sarcasm, and she made an exaggerated choking motion, as if to show him how it was done. “You strangled her?” With that, the eavesdropper at the next table abandoned any pretext of indifference. He got up, slapped a twenty-dollar bill on his table, and scuttled away.

She waited until the man was gone. “How do you know she was dead? If you left her, are you sure she was dead? Are you sure, Mark! They haven’t found the body. She was unconscious. Maybe she just got up and walked away.”

“I thought that a million times. She was dead. I know she was.”

Mark had regained some control. His eyes were smarting from the smoke, which she was making no effort whatsoever to direct away from him.

“I want to explain—”

“All right,” she said abruptly. “Tell me how it happened.”

He said that he hadn’t lied to her when she first asked him about Susan, back when Susan was shooting her mouth off about Mark. He had laughed it off as absurd. And it was—he hadn’t slept with her then. That happened later, but except for the night Kenneth called, the subject hadn’t come up again until now.

All of the pieces fell together with a deafening thud. There was another round of drinks that was brought by a waitress wearing a thong bikini bottom and a lacy push-up bra under a little red jacket. Kathy was dimly aware of her trying to make eye contact with Mark. Her mind careened through uncertain frames of time: Mark and Susan drive into the mountains; they park, argue some more, suddenly she’s screaming, hitting—and he loses it. It’s over in sixty seconds. He pulls her out onto the ground, desperate, but she won’t breathe. Like that, she’s dead. She’s wearing his shorts and T-shirt, for some reason that Kathy forgets. He puts her in the trunk of the car and goes back to the motel. And then drives to a meeting in Lexington the next day and parks the car out front with Susan’s body in the trunk. He drives around with a dead woman locked in the trunk of his car, like a gym bag?

“You have to remember, she was screaming at me, Kat. I was afraid that everyone else in the hotel would hear about it.”

He succumbed to wrenching tears just as the reality of what Kathy was hearing slammed finally into consciousness. In a flash of contempt, she walloped him, smacked him so hard her arm resonated with pain. He tried to duck the blow, which caught him forcefully on the right side of his face. As he dodged, he lost his balance and fell to the floor, one hand grasping the little table on which the drinks had spilled. He was crying like a three-year-old when he came back up. She had never seen Mark shed more than a few sentimental tears and watched the spectacle with the detached interest of a motorist passing an accident scene.

She wasn’t budging. “No, I’m not moving and you’re not moving. I’m simply not ready to get up yet.” She had mustered a degree of haughtiness now and caught the eye of the waitress, who had wandered over expectantly when she saw Mark fall. Kathy regarded the waitress contemptuously in her skimpy costume, ready to wallop her, too.

“Another beer?” the waitress asked Mark, and added with a look at Kathy, “Another double Black Russian?”

“Yeah, another double. And he’ll have a beer.”

Kathy turned back to Mark, but the conversation had begun to blur. Several surreal rounds of drinks later, she and the man she had long loved and respected, the father of her children, had explored every facet of the fact that he had killed Susan Smith.

In the car, Kathy lay back and blamed herself: “I could have stopped this if I had been paying attention.”

“Hey, I did what I did. Nothing you did could have prevented this.”

She recalled making a few clumsy thrusts: “You bastard, how could you do this to us?” and “Why did you tell me! Now that I know, I can’t lie for you!” She remembered him wordlessly and gently undressing her in their bedroom and taking his place in bed beside her. She sat up and shouted, “What am I going to do with the kids while their father is in prison, Mark! Did you think of that when you killed her?”

Featured still from 'Above Suspicion' via Bold Films; All other photos: Open Road Media