This "cozy horror" series is the binge-read you've been waiting for.

I don’t know about you, but I’ve had a harder time than usual focusing on reading this past year. I’m sure it’s the cumulative effect of living through a global pandemic coupled with a great amount of social instability and global change. There is a lot of uncertainty in the world right now, and as much as I love horror, it’s been difficult for me to read anything too intense or heavy. Living in our current reality is challenging enough.

Still—I love reading and I love horror. It turns out, I just needed to find the right books. Just in time to binge read the entire series, I discovered The Complicated Life of Deegie Tibbs series by C. L. Hernandez. These books are so much fun—and the only way I can think to describe them is “cozy horror.” We’ve all heard of cozy mysteries…but is cozy horror a thing? Well, if it wasn’t before, it is now—and I am here for it. This series jolted me out of my reading funk—and fast!

Related: 19 Bone-Chilling Witch Movies That'll Put a Spell on You

The vibe of these books is similar to the tv show Charmed: There is witchcraft and the usual trappings of occult lore, including old spell books, ghosts, demons, underworld gods—and plenty of gore. There are enough familiar horror elements to satisfy my craving for all things dark—yet there's also a comforting cozy vibe, as lone witch Deegie Tibbs moves into a giant old (haunted by a friendly ghost) house, drinks magical herbal tea, owns a cute witchcraft shop, and finds love in a rugged redhead—all while fighting off demons and other malevolent entities.

Oh—and as a charming bonus, at the end of each book in the series, the author provides several witchy recipes for elixirs, teas, salves, and other magical concoctions related to the themes of the story.

The first in the three-book series is A Jar of Fingers—and today, we’re bringing you an excerpt. I am certain you’ll be hooked. So, go ahead—pour yourself a cup of tea, light an enchanted candle, burn some dreamy incense, and read the excerpt. Welcome to your newest binge read.

Read on for an excerpt of A Jar of Fingers, and then purchase the book.

A Jar of Fingers 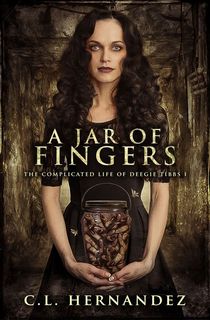 When she stood up the room canted oddly to the left, and her first thought was that her excavation had somehow caused the entire floor to collapse. Instinctively, her hands shot out for the edge of the table to brace herself, but she remained upright; the floor was level once more. The sensation left her with a sickening vertigo, and she managed a muttered, “What the hell ...?” before the room banked to the right this time, and she grabbed madly for the table again.

Beneath her feet, separated by mere inches of wood and horse-hair insulation, she heard the demon chuckle, as though he were pleased to discover that he could still manipulate the humans even if he couldn’t escape from his basement prison.

“Knock it off, you jackass!” Deegie gripped the back of the chair and the edge of the wainscoting, readying herself for another ride on the demon-go-round. She wasn’t sure how the foul creature was managing to play with her mind from the confines of the basement, but she wasn’t about to let it think that it was winning. The floor bucked and heaved. Deegie heard the creaking of the old wood as it strained against the square-cut nails. Although she was nearly knocked off her feet again, she knew it wasn’t real, and wondered how long she could put up with the demon’s ruse. She had wanted a house like this her entire life; giving up wasn’t an option.

The illusions continued, and became even more mindbendingly realistic. The battery-operated clock on the wall melted and dripped in long yellow runnels, and the teakettle on the stove flapped its spout cover and clucked like a chicken. The room did another crazy, funhouse spin and the walls themselves began to run and distort as though they were made of hot taffy.

“Nice try!” Deegie yelled. “Is that the best you can do, you second rate-demon? Pssh! I wear heels bigger than your balls!” She had no idea if there was any risk involved when it came to provoking a captive demon, but she was beyond caring. “You’re going to have to do better than that if you’re trying to scare me out of my house!” She braced her feet and prepared for another onslaught, reminding herself over and over that this wasn’t real, wasn’t happening except in her head.

Related: 13 Horror Books About Witches That Will Cast a Spell on You

The new stove and refrigerator became animated lumps of white enamel and chrome, which tore themselves away from the walls with horrendous wrenching sounds and trundled across the kitchen. The refrigerator’s door was now an obscenely flapping mouth that vomited groceries. Apples and oranges rolled across the floor, shrieking with tiny, toothless mouths, and the chicken she’d bought to make stew tumbled into a puddle of soy milk, tore free from its plastic bag, and flailed its naked limbs. It flipped over onto its breast and crawled towards Deegie with erratic jerks of its plucked wings and naked, truncated legs. Waves of nausea rushed her from all sides as a foul, open-sewer stench poured into the kitchen from a heating vent. She gagged and fought to control her gorge over this latest assault to her senses. The chicken dragged itself closer and reached out for her shoe with a questing wing tip.

“Nice sideshow, death breath.” Her voice dripped with scorn, but her heart was galloping crazily in her chest, and her breathing was quick and shallow, as if the air were scarce. As much as she hated to admit it to herself, the demon’s mind-bending antics were becoming too much to bear. She kicked the creeping chicken and sent it hurtling into the kitchen sink, where it flopped and writhed and emitted thick, burping noises from its empty body cavity. “You bore me, but I’ll be back. You can be sure of that!”

Want to keep reading? Click below to purchase your own copy of A Jar of Fingers by C. J. Hernandez!

A Jar of Fingers

And if you are smitten as I am, you're going to want to read the rest of the series as soon as you're done with this. To make life simpler for you, we've linked to the next two books in The Complicated Life of Deegie Tibbs series below!

The Witch War of Fiddlehead Creek 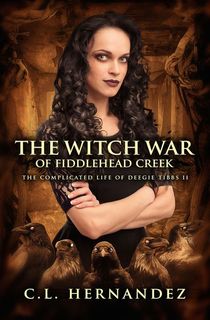 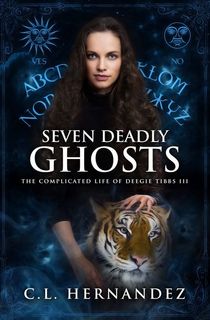