A Fit of Rage: Was John Selby Watson Insane or Just Trying to Get Away With Murder?

In October 1871, the maid of John Selby Watson found him unconscious on the floor of his study. Next to him were two notes: One to the maid, containing wages Watson owed her, and the other to his doctor. The latter read: “I have killed my wife in a fit of rage to which she provoked me.” Sure enough, in the other room lay the body of Mrs. Watson—her head battered in with the butt of a pistol.

Though Mr. Watson recovered and stood trial under a plea of insanity, the truth was that the Watsons’ marriage was a turbulent one—caused by Mrs. Watson’s shifting moods and violent temper. In the speculative historical book Watson’s Apology, novelist Beryl Bainbridge imagines the events leading up to Mrs. Watson’s gruesome murder.

Read on for an excerpt, then download the book. 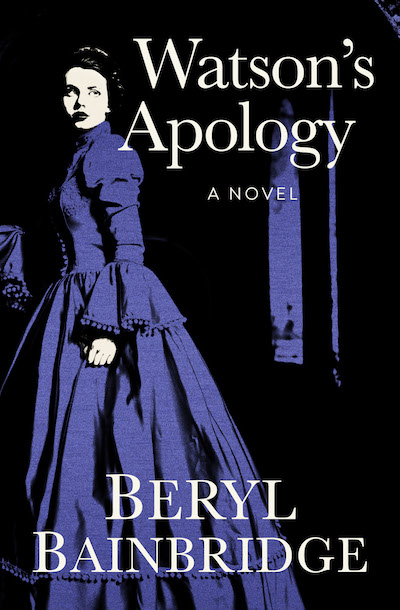 "Fred, who had been sitting some yards from the rest of the party, suddenly fell from his chair and rolled in the sand. Mr. Bush’s first thought was that he was having a fit. Mrs. Watson was walking back towards the group beneath the umbrellas, the towel still draped over her bonnet. Fred was now squealing in a peculiar way. Mr. Bush, momentarily rigid on his chair, decided he was being stung by invisible and silent bees. He was just struggling to his feet when Fred, pointing his finger at Mrs. Watson, sat up and bellowed with laughter. One side of his face was veiled in sand.

‘Tell that fat simpleton to keep quiet,’ said Mrs. Watson. She flung the towel from her head and strode away towards the rocks.

Nobody uttered a word. The squealing and the laughing continued for several long seconds, during which age Mr. Watson dug a hole by his chair with the tip of his walking stick. Mr. Bush was sorry it wasn’t deep enough to bury the wretched Fred.

Afterwards he was not sure of the sequence of events that preceded the accident. Certainly Mr. Watson had been looking in the direction of the rocks a moment before his wife screamed. Her forehead was badly gashed. The blood ran down her face and dripped onto her blue bodice, and she made little moans, one after the other, all the way along the beach and up the steps to the Parade. A crowd of onlookers gathered and Mr. Watson waved them away with his stick. As she was helped down the road under the avenue of limes, Mrs. Watson dashed her head from side to side and splashed blood on to the dappled ground. The whites of her eyes flashed in the green tunnel of the trees. Fred, carrying the folded umbrellas, remained mercifully silent, though he was smiling. When Mr. Bush got him back to the boarding house he sent him straight upstairs to douse his head in a basin of cold water."

Want more true crime books? Sign up for The Lineup's newsletter, and get our recommended reads sent straight to your inbox.

"Mr. Bush did not go down for supper that night; he was too ashamed. Mrs. Merryville sent up a plate of cold meat, and when he had eaten he climbed into bed beside Fred. The undersheet was sprinkled with grains of sand, but he fell asleep immediately.

In the middle of the night he was woken by voices and the slamming of doors. He put on his flowered dressing-gown and went out on to the landing. The lights were turned up and the head master was walking along the corridor in his nightshirt. Mr. Bush noticed the reddish hairs on his stout calves and the threadbare condition of his slippers.

‘My wife is delirious,’ said Mr. Watson. ‘I have fetched the doctor.’ He went to the head of the stairs and slumped down on the top step. Mr. Bush stood behind him and stared miserably at the carpet. The front door had been left open and the hall was full of rustlings as the wind fluttered the trees in the drive. He could hear the sea sweeping the shingle on the beach.

‘An hour ago she started to talk to me in a deranged manner,’ said Mr. Watson. “In an almost biblical manner.’

‘Thou must go into the garden. Thou must not stay indoors on such a fine day. Dost thou think thou canst escape me?’

‘I have always been too self-reliant,’ Mr. Watson said. ‘It is my main fault.’

‘You shouldn’t blame yourself,’ protested Mr. Bush. ‘There are always two sides to every problem.’

Watson groaned and beat the banister rail with his fist.

This is too dreadful, thought Mr. Bush, and he wedged himself beside Mr Watson and patted him awkwardly on the shoulder.

‘She has a swelling above her eye,’ Mr. Watson said. ‘It pains her.’ Mr. Bush could bear it no longer. Mrs. Watson’s act was quite incomprehensible to him. He blurted out, ‘She did it to herself. My son Fred tells me so, and he is not a boy for lies. He saw her drag her face against the rock, and then she butted her head like a goat.’

‘I know,’ said Mr. Watson. ‘I saw her too. But intentional or otherwise, the result is the same. She has hurt herself and is paying for it.’

There were tears in Mr Bush’s eyes, though they were not for Mrs. Watson. He cried out that it was a tragedy.

‘Apparently so,’ Mr. Watson said. ‘At least to the spectators. God knows what it was for her.’ He stood up and returned to his pacing of the corridor.

Mr. Bush settled himself on the cane chair in the alcove and wiped his wet cheek with the tassel of his dressing-gown. The thought came to him that never again, after tonight, would Mr. Watson confide in him. They would possibly remain friends, but further advancement was impossible – a man could only reveal so much of himself.

Related: What Is Bedlam? The Hospital That Defined Madness

Presently Mrs. Merryville came out of the bedroom carrying a basin filled with pink water and scraps of blood-stained lint. She was followed by the doctor.

‘The wound is superficial,’ he declared, ‘but she has heatstroke.’

When the doctor had gone, Mr. Bush thanked providence it was not more serious. Mr. Watson shook him by the hand. He said, ‘You’re a good fellow. You take things to heart.’

‘I blame myself,’ stammered Mr. Bush. ‘Or rather I blame Fred.’

‘Fred had nothing to do with it,’ said Mr. Watson. ‘I believe you already know that.’ He looked searchingly at Mr. Bush and added, ‘Tired of the raging sea I’m getting sane, and my old scars are quite skin-whole again.’

Mr. Bush went into the bedroom and woke Fred. ‘Mrs. Watson has sunstroke,’ he told him, ‘and the head master is a little mad. He’s just informed me he’s recovering, and that his old cuts are healing. I imagine he’s thinking of those marines.’