4 of the Most Bizarre Mass Delusions

Some of history's creepiest events have happened entirely inside the human mind.

Bodies are complex. So it shouldn’t come as a surprise that there’s no shortage of “contagious” mental disorders throughout history. Called mass delusions or mass hysteria, these occurrences aren’t limited to one location or time period. Here are four of the most interesting ones out there.

In recent years, researchers have been baffled by a phenomenon called “The Hum.” According to The New Republic, it is described as “a mysterious auditory phenomenon that, by some estimates, 2 percent of the population can hear.” Sufferers’ accounts range from simply hearing an ever-present murmuring with no legit source to feeling that a room is vibrating, causing nausea and disorientation. With widespread attention to the issue in the 1970’s (though some documents allude to The Hum as early as the 1800’s), some experts have written these occurrences off as tinnitus or delusion while others believe there is a scientific mechanism behind it. This lack of consensus has led to the birth of conspiracy theories speculating about the true cause of this auditory annoyance. 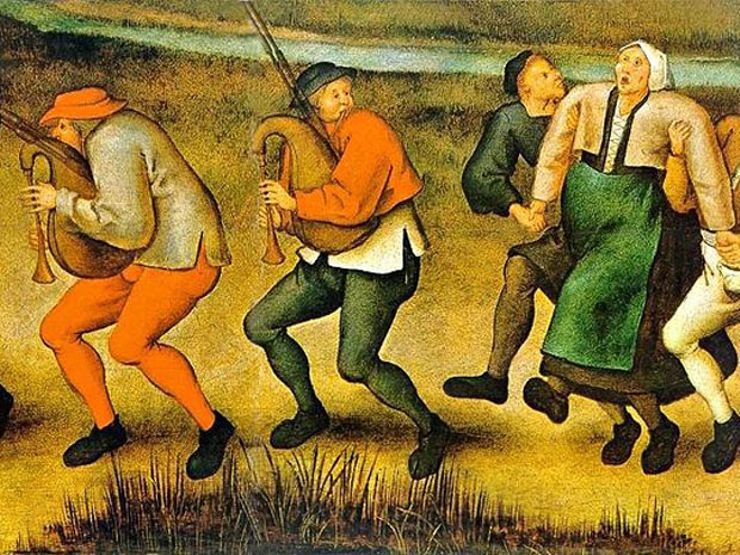 When a woman took to the streets of Strasbourg, France in 1518 to dance, it caused an epidemic that literally killed. Called the Dancing Plague of 1518, the BBC reports the woman, who danced for days on end, gave the dance bug to 100 other people who joined in a week later. Authorities believed the only cure was to allow them to dance it out—so halls with professional dancers and musicians were used for the afflicted. But things took a serious turn when those with weak hearts began dying from the dancing. The “plague” calmed down after the 400 sufferers were taken to a healing shrine. Though some speculate that psychedelic growths on rye—and even ungodly influences—led to this occurrence, it is mostly accepted as a case of mass hysteria.

Laughter is contagious. So much so that in one village in Tanzania, it led to schools being closed and panic about whether the reaction was indeed contagious. According to the Chicago Tribune, the event might have started as a joke among a group of boarding school students. Soon people around town and in neighboring villages began laughing uncontrollably with no cure. Researcher Christian F. Hempelman explained how this ailment was an example of a Mass Psychogenic Illness (MPI), meaning the mind was causing these individuals to exhibit physical symptoms. While this could be written off as a case of attention-seeking, Hempelman explained how a common yet pressing factor led to this group reaction.“In 1962, Tanganyika had just won its independence. The young people involved reported that they were feeling stressed by the higher expectations of their teachers and parents,” he opined.

What happens when a serial killer is simply a figment of the imagination? One city in 1938 was faced with just that bizarre idea. Several people in Halifax, England went to police saying that they were attacked by a man with a razor, who was aptly called the Halifax Slasher. According to the Halifax Courier, the first report came from two mill workers who claimed they were left bloodied by a blade-wielding assailant. In two separate incidents (days apart from one another), two women reported they were attacked, leaving the city and police on edge. Despite authorities’ best efforts, attacks continued leading to citizens taking to the streets to find the culprit themselves. Over time, the crime spree was scrutinized for several reasons. First, witnesses’ descriptions of the suspect were not consistent—and some even alleged there were more than one attacker. Next, there were no clues left behind from any of the attacks. Finally, and most importantly, “victim” after “victim” came forward to confess that the injuries were self-inflicted. One admitted that her cut to her arm was done following an argument with a blade she purchased and another admitted to papers that she had lied.“It is almost inconceivable that sane persons should do injury to themselves and then willfully make reports to the police which are false,” the prosecuting solicitor commented.

THIS STORY WAS FIRST PUBLISHED ON Crime Feed

Authorities Relaunch Search For The “Original Night Stalker,” 4 Decades After The Killings Began