They're known as the original ghostbusters.

Ed and Lorraine Warren remain some of the most important figures in paranormal investigation. Together, they took on work as demonologists, authors, and lecturers, and they founded the New England Society for Psychic Research, all the while operating The Warren’s Occult Museum of evil artifacts collected from more than 10,000 investigations the were involved in. They were the original ghostbusters, leading the way in supernatural research. Here are the five most notorious paranormal cases upon which the Warrens built their career. 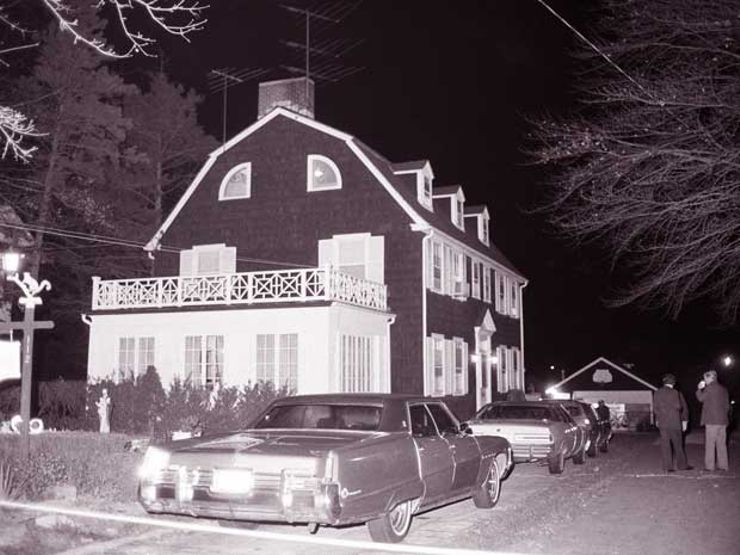 In one of their most famous cases, the Warrens were asked to investigate the Amityville haunting in 1975. George and Kathy Lutz had moved with their three kids into a home in a suburban, Dutch Colonial house where Ronald DeFeo, Jr. had murdered his family the year before. While the family was unpacking, a priest came to bless the house but was told by a masculine voice to get out. After the house was plagued with flies, Kathy began having nightmares, receiving welts, and levitating in her sleep, while George discovered a hidden “Red Room” before which the family dog cowered.

Terrified the Lutz family tried to contact the local Catholic priest only to find the phones would cut out whenever they would try to call. On the final night things became drastically worse. Banging noises emanated throughout the house, furniture moved by its own accord, and the children were terrorized by unseen entities. It was the final straw. After just 28 days the Lutz family fled the house, never to return.

The Warrens investigated with a Channel 5 New York TV crew and a reporter from WNEW-FM. After catching an image of a demonic boy with glowing eyes, the investigation came to a close with the Warrens believing they at last understood what had caused the extreme paranormal activity. After detailed research they discovered the land had once been owned by John Ketchem, commonly believed to practice the dark arts. At his request, Ketchum was buried on the land on which the house would be built upon. Earlier still, the Shinicock Indians had once used the land as an enclosure to house the sick and the mad, who were deserted to die alone and in pain. 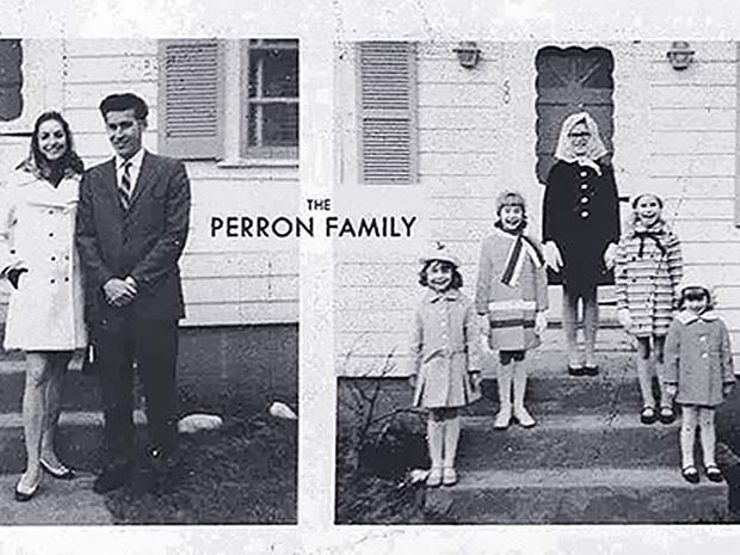 In 1971, the Perron family moved into a charming farm home on the Old Arnold Estate in Harrisville, Rhode Island. From the start, mother Carolyn was the focus for paranormal events, starting with her awaking to a woman in a gray dress telling her to “Get out. Get out. I’ll drive you out with death and gloom.” From there, things escalated with pinches, slaps, and burning and stabbing sensations, alongside strange noises in the night, floating objects, and levitating beds. The Warrens quickly identified the cellar as a hot spot and Carolyn as the focus for the haunting of a spirit named Bathsheba Thayer who had cursed the house in the 19th century.

Bathsheba Thayer married Judson Sherman on March 10, 1844, and sometime after came to live at the Old Arnold Estate. The first child of the union died and Bathsheba charged with its murder. Her baby’s body had been found, impaled in the head with a sharp object. Locals and the authorities alike believed the murder to be a sacrifice to Satan and that Bathsheba herself was a practising Satanist. The case was eventually dropped due to lack of evidence, and Bathsheba lived the rest of her life as an outcast from the community. She died by hanging herself from a tree behind the house. The coroner wrote that upon examination of her body, he had never seen anything like it – her emaciated body had solidified, seemingly turned to stone.

As the paranormal activity intensified, the Warrens visited the Perron family throughout 1974 and worked on cleansing the building but only seemed to anger the spirits. In the end, the family stayed in the house until they were able to sell in 1980 but continued to experience a milder haunting even afterwards. 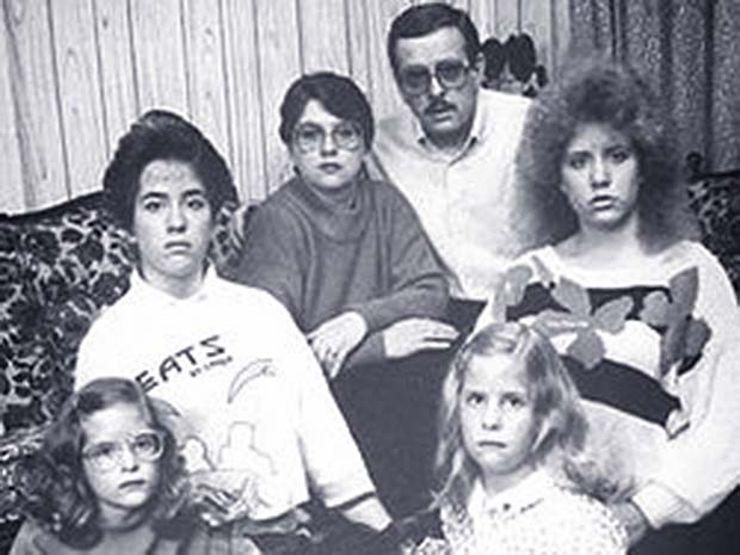 Jack and Janet Smurl of West Pittston, Pennsylvania found their double-block home subject to a demonic invasion between 1974 and 89. In particular, they experienced loud noises, rank odors, disturbing apparitions, and other phenomenon, including their dog being thrown into a wall and their daughter being pushed down a flight of stairs. They called in the Warrens for help, and Ed quickly realized the power of the demon in question. While playing spiritual music and praying in the Smurl’s home, he reported mirrors and furniture shaking, a distinct temperature drop, and the formation of a dark mass, as well as a mirror message on one occasion to “Get out.” The Warrens concluded that the household was dealing with three evil spirits and one demon. While others claimed delusions or hallucinations were to blame, the haunting eventually ended after a church-sanctioned exorcism in 1989 which cleared the house of its paranormal activity. 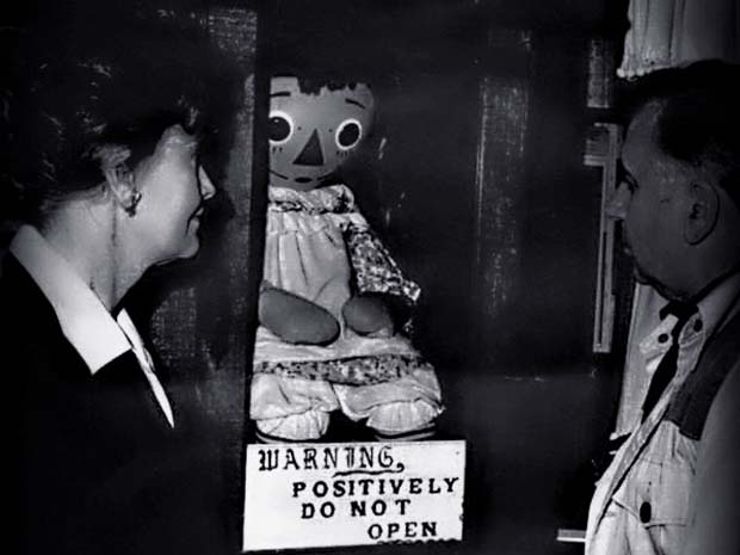 The story of Annabelle begins with a mother buying her daughter an old Raggedy Ann doll on the young woman’s birthday in 1970. The daughter, Donna who was a student nurse, soon noticed that the doll would move around the house of its own accord, often appearing with droplets of blood on its dress. When notes followed that read “Help us,” she and her roommate contacted a medium who believed that a little girl named Annabelle Higgins had possessed the doll. However, events escalated when the doll seemingly attacked a visiting friend, and Donna contacted the Warrens. Ed and Lorraine realized that the doll was in fact being manipulated by the darker presence of a demon. At the conclusion of the investigation the Warrens felt it appropriate to have a recitation of an exorcism blessing to cleanse the apartment. At Donna’s request, and as a further precaution against the supernatural phenomena ever occurring again, the Warrens took the rag doll along with them when they left. They put Annabelle in a special case in their Occult Museum to keep her uniquely potent evil contained.

Related: 7 Haunted Objects You Do Not Want to Bring Into Your Home 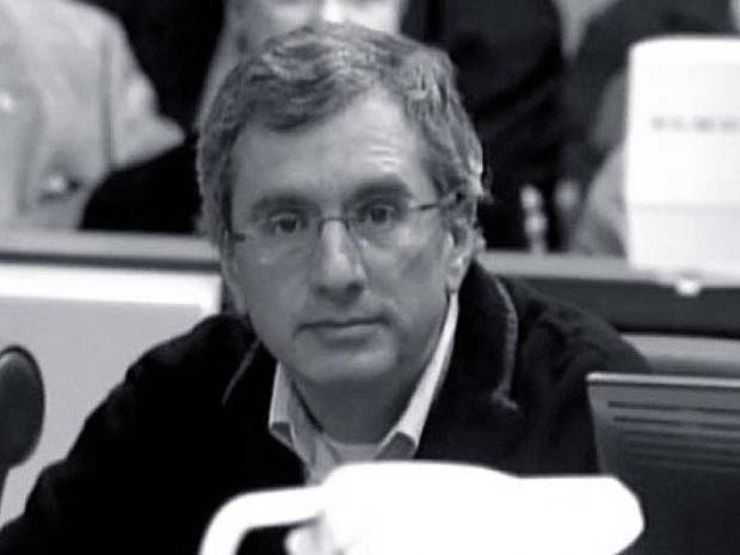 The Devil Made Me Do It trial saw Johnson defending himself for manslaughter charges on the basis that he had been possessed. His attorneys pointed to the recent possession of 11-year-old David Glatzel, who had encountered an old man while his parents were cleaning up a new rental property. The family began hearing noises in the attic, and David experienced visions of a demonic figure threatening to steal his soul. The Glatzels called in demonologists Ed and Lorraine Warren, who witnessed the boy growling, hissing, and being choked and beaten by invisible hands. They turned to an exorcism, but Johnson antagonized the demon during the ritual, risking it passing onto him. Although Lorraine warned against it, Johnson investigated an old well on the rental property, where the Warrens believed he became fully possessed by the demon, leading to his killing his landlord months later. The Warrens gave evidence at the trail but in the end, Johnson was convicted of first-degree manslaughter, despite although he only served 5 years of his 10 year sentence.

These five cases are some of the most important ones that the Warrens solved during the thousands of investigations that they performed in their lifetimes. Furthermore, they worked hard to nurture the next generation of paranormal investigators, training Dave Considine, Lou Gentle, and John Zaffis, among others. Although Ed passed away in 2006, Lorraine continues to provide assistance to other investigators in order to keep helping people deal with the malevolent spirits that all too easily disrupt our homes and households.