The Sleep Room is Anything But Restful

A controversial treatment at Wyldehope Hall mental hospital may be the least of this doctor’s worries.

Is a paranormal presence lurking the corridors of Wyldehope Hall mental hospital? Or is something even more sinister to blame?

Young Dr. Richardson has eagerly accepted a job working on a controversial study that treats severely mentally disturbed patients by keeping them asleep for months. But what he doesn’t know is that the real threat may lie outside the sleep room.

Author and clinical psychologist F.R. Tallis’ The Sleep Room twists and turns on its way to a climax that will make you question your own sanity. 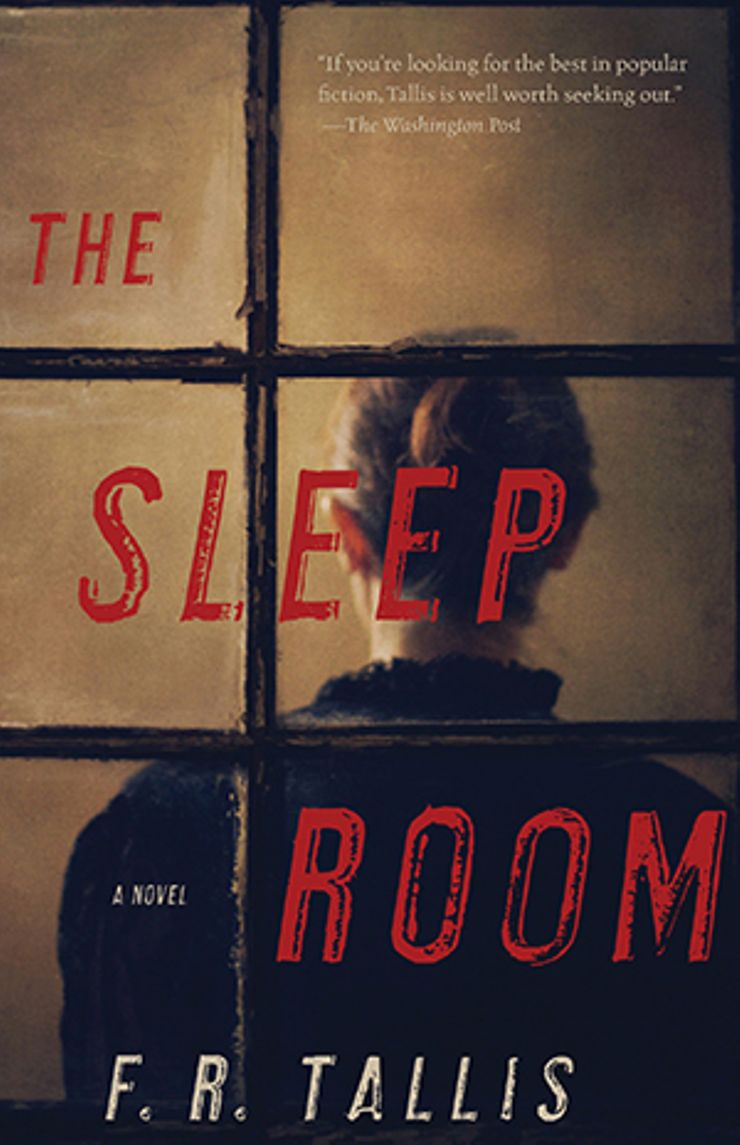 A querulous floorboard protested somewhere below. I peered into the emptiness and the roar of my own blood became louder. Nothing was discernible. I held out the candle and waved it over the void, but all that this achieved was a rearrangement of the shadows. The magnified silhouettes of woodland creatures circled me like predators. My eyes strained against the darkness and I detected subtle suggestions of form and movement. I found myself looking at a figure, engaged in the task of slow, effortful ascent. Its pale hand slid along the banister rail, producing a soft hiss, and the looseness of its garment reminded me of monkish robes. Fear rendered me insensible, and a kind of strangulated cry escaped from my open mouth.

‘Dr Richardson? Is that you?’

The lambency of the flame assembled Michael Chapman’s face in the stairwell. What I had mistaken for a habit was, in fact, his baggy dressing gown.

“Michael!’ Relief was instantly replaced by anxiety. ‘What on earth are you doing here?’

‘My bed,’ Chapman said. ‘It was moving so much, I couldn’t stand it any more.’

‘But Michael, how did you get off the ward? The door was locked.”

‘That’s impossible.’ I would never have made such an error. ‘Did you find a key in the nurses’ desk?’

‘No.’ He moistened his upper lip with the tip of his tongue. ‘The lights aren’t working. I couldn’t see a thing. Why aren’t the lights working, Dr Richardson?’

‘I could tell that someone was upstairs with a candle. I was hoping it would be you. The bed was shaking and rolling from one side of the room to the other. It was making me feel sick. Mr Morley was sick earlier, perhaps his bed was moving too.’

‘He has the flu. Come on, Michael. Let’s go downstairs.’

‘That new medication you’ve put me on isn’t doing me any good. I feel different. Not quite myself.’

‘Michael. Listen. You really must go back to your room.’

“I ignored his objection. ‘I’ll get Mr Hartley to start up the generator, and then I’ll return at once. Come on, Michael, let’s go.’

‘No,’ Chapman repeated. It was unlike him to be so stubborn.

He hauled himself up the last few steps and stood beside me on the landing. I saw something glinting in his hand. It was a carving knife. He must have seen me recoil, because he made a furtive attempt to slip it into his dressing-gown pocket.

‘Michael?’ I said, trying to remain calm. ‘What have you got there?’

‘It looks like a knife to me. Where did you get it from?’ He shook his head. I guessed that he must have wandered through the dining room and into Mrs Hartley’s kitchen. ‘Michael’ — I extended my hand — ‘that could be very dangerous. Please, give it to me.’

‘Why do you want a knife, Michael?’

“Against what? You don’t need to protect yourself here.’

‘Michael, give me the knife. Please.’

‘Do you think it’s her? Come back to torment me?’

‘The swimmer. The girl.’

‘What do you mean, come back? Come back from where?’

‘She was so …’ His fingers contracted. An odd, slow squeeze, as if they were meeting with some form of weak resistance. ‘Soft.’

‘We’ll talk about the girl when we get downstairs,’ I said, addressing him more firmly. ‘Now, give me the knife.’ 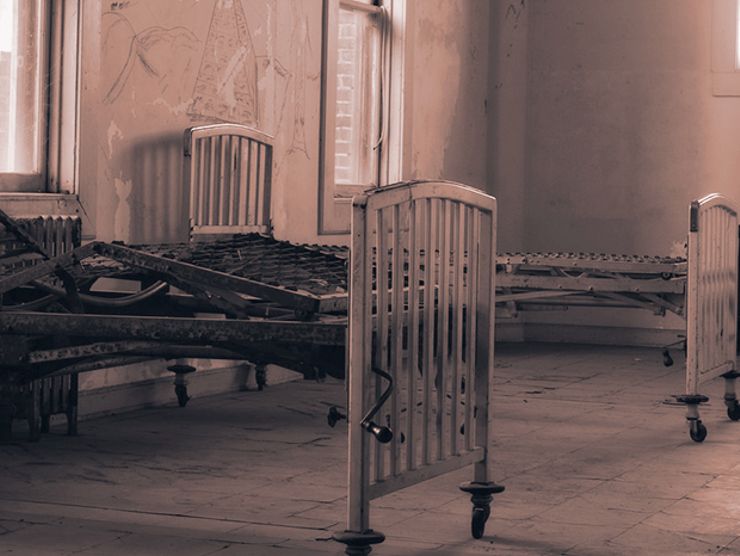 He wasn’t a strong man and I was confident that I could disarm him. I was working out how I was going to achieve this, rehearsing maneuvers in my mind when, quite suddenly, Chapman tensed. His whole body stiffened. He was evidently staring at something behind my back. His eyes were wide open and protruding slightly, his irises fully exposed and the whites gleaming. Everything about him was taut, coiled and alert. I wheeled round and followed his gaze. He was looking through the wooden arch of the door frame, at some distant point at the far end of the hallway.

There was something about his choice of words, the non-specificity of the pronoun, that chilled me to the bone. There is nothing more frightening than that which cannot be identified, no engine of fear more powerful than the unknown. If I had been more composed (and less prone to professional prejudices) I might have realized that Chapman’s pronoun was not merely a part of speech, but the key; however, at that precise moment, I was incapable of meaningful insight.

I pointed into the gloom of the hallway and said, rather unconvincingly, ‘There’s nothing there. Come on, Michael. Please. Give me the knife and we’ll go—’

My sentence was interrupted by a thunderous noise. Chapman and I ducked and cringed as if we were being shelled. Every door in the hallway was being repeatedly opened and shut with superhuman speed and violence. This crashing and banging was sustained for about ten seconds, after which it came to an end as abruptly as it had started. Chapman and I were so stunned we remained rooted to the spot, frozen in attitudes of cowering disbelief.

A flurry of ‘confetti’ blew out onto the landing: some of the flakes swirled in the air before dropping to my feet. I bent my knees and picked up one of the pieces. Holding it close to the candle, I saw that it was covered in closely printed text. I noticed the name of an American pharmaceutical company and realized that I was holding the remains of one of Maitland’s offprints.

Chapman’s voice was wary, uncertain. I let the square of paper fall to the floor and looked up. A tongue of flame had appeared. It was difficult to judge its position, but I estimated that it must be hovering just outside the bathroom. I wanted to believe that it was an illusion, a reflection of my own candle on the panel of an open door. But there was something inconsistent about its elevation. It was far too low.

Chapman took the carving knife from his pocket and thrust it forward like a sword.

As the flame advanced, Chapman and I retreated a few steps backwards. Perhaps my eyes were deceived, but I thought that I could see a shape behind the glare, an outline that encouraged the brain to supply missing details. I am still not sure what it was that I saw. But the darkness seemed to become textured. It moulded itself around a face: a small, rounded face with blank, doll-like features. Confusion became horror, I lost my nerve, and I was about to flee down the stairs, when the landing door slammed shut, displacing a large volume of air in the process. Its forceful closure sent a tremor through the whole building, my candle went out, and we were plunged into total darkness.