The Sandyford Murder Case of 1862

Jessie McLachlan, the victim’s best friend, found herself charged with one of the most hideous murders that Glasgow had ever seen.

It was the summer of 1862 when Jess McPherson was found stabbed to death in her home, half naked and lying in a pool of her own blood.

The only evidence left at the crime scene was the presence of three small, bloody footprints. When Jess’ coat was discovered in the home of Jessie McLachlan (pictured above), the victim’s best friend found herself charged with one of the most hideous murders that Glasgow had ever seen.

Disclaimer: The following excerpt from Christianna Brand’s book Heaven Knows Who uses an antiquated version of “Mc,” which reads “M'” in both Jess McPherson and Jessie McLachlan’s names. 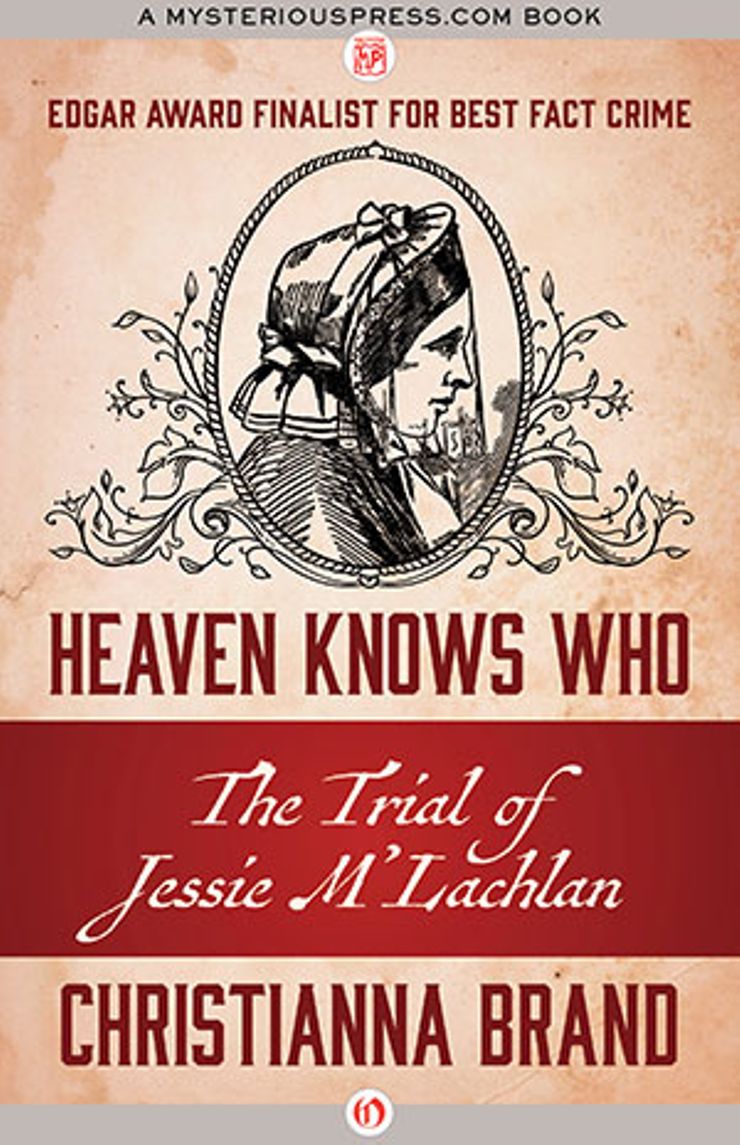 She lay on her face near the foot of the bed, which was to the right as you came through the door. Her body was half clad in a semmet, a shift and a woollen polka—a sort of knitted vest, a chemise or short petticoat and a short woollen dressing-gown—but these had been pulled up over her head and shoulders, leaving the lower half of her body bare. A piece of carpet had been thrown down over the upper part. About her head, face and hands there were forty wounds. An iron cleaver was found in a drawer of the kitchen dresser.

The bedroom was in confusion. The bed appeared to have been slept in; the bedclothes were stained with blood and had been pulled down into a heap at the foot of the bed. A blood-stained sheet which looked as though it had been taken off the bed was rolled up under the washstand; it was rather damp.

Under one of the tables near the body was rolled the silver cruet stand from the dining-room upstairs, minus its bottles. There was blood all about the room, and close to the window wall three bloody prints of a naked left foot. And a chest that had held Jess M’Pherson’s clothes stood open—the few remaining contents thrown back, all stained with blood, as though, said Dr Fleming at the trial, some bloody hand had been at work among them …

All Jess’s best clothes had disappeared, and her everyday dress was gone from its hook—a cinnamon-coloured dress trimmed with blue velvet, but with no flounces. In the lobby between the bedroom and the kitchen there were smears of blood. There was blood on the kitchen sink, and in a chest of drawers in old Fleming’s wardrobe-room across the passage were two shirts, newly dressed, spotted with blood.

Related: BLASTS FROM CRIME SCENES PAST

But more fantastic still, the floors of the kitchen and the bedroom and the stone flags of the lobby had recently been washed. The kitchen floor was the drier, but it still looked damp. The lobby flagstones were absolutely moist. On the wooden floor of the bedroom, outside the part that had been washed, there were three bloody imprints of a small naked foot. And most fantastic of all—the face, neck and chest of the corpse appeared to have been washed. 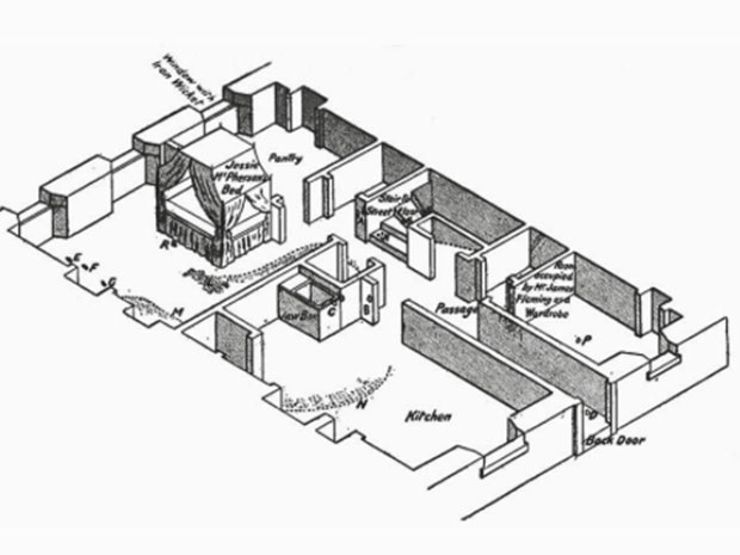 The basement of 17 Sandyford Place

Later that evening the police asked Mr Fleming if anything more was missing than the clothes from the chest downstairs. He had not thought of looking and would hardly know, for he was not sure what had been taken to the summer residence at Dunoon. They went into the dining-room—that room where, at four o’clock on the Saturday morning, the three merry wedding guests had seen the gasolier alight—and there found the sideboard standing open. The day-to-day silver spoons and forks were gone: all that remained was a single silver teaspoon which was found in a cup on a shelf in the kitchen. The silver teapot and stand and the silver cream jug were still in the sideboard (there were two other silver tea services in the house), and so were the glass bottles from the cruet which lay tumbled under the table in the murdered woman’s room below.

Mr Fleming indicated the tea-set. ‘They might have gotten away with that,’ he said, ‘if they had been wanting plunder,’ and the detectives agreed that ‘an old thief, an accustomed thief, would have taken away more than was taken. One not practised in thieving might leave something behind.’ On the other hand, to have left a plated thing like the empty cruet-stand seemed to Police Officer Jeffrey like the trick of an old thief, and altogether the whole thing was a mystery that they could not see the bottom of. He had not, he candidly admitted at the trial, seen the bottom of it even yet.

Jessie M’Lachlan’s route to and from the spirit shop.

So the night dragged on. Under the yellow-blue light of the gas lamps or holding their candles close, the doctors and policemen crouched over the dead body or padded with probing fingers and eager eyes about the house. Police Officer Campbell had got hold of a little bit of stick and was measuring the bloody footprints on the bedroom floor. He compared their length by putting his bit of stick against the soles of the dead woman’s feet. The stick was quite appreciably shorter. So the footprints had not been made by Jess M’Pherson, but he thought they were those of a woman.

In the early hours of the morning Mr Fleming took his father and son with him and sought refuge elsewhere, turning over his home to the authorities. One by one the doctors and policemen packed away their instruments and snapped shut their notebooks and crawled home to take a few hours’ rest before it all began again next day. A uniformed man or two left in charge of the closed and shuttered house, dawn breaking and the birds beginning to sing in the trees along Sauchiehall Street.

And alone in her bedroom, lying there half naked, with her secrets still held close in her wounded hands, poor Jess M’Pherson lay as she had lain for three full days and three full nights, and would lie at least two days more till they had done with her.