Andrei Chikatilo killed over 50 people before finally being arrested in 1990. He remains the worst serial killer in Russia's history.

When Andrei Chikatilo was first taken into custody in 1984, he had already killed 32 people. He was picked up by police while trying to lure a woman away from a bus station, and he matched the description of the man last seen with 10-year-old Dmitry Ptashnikov before the boy was found murdered. But Chikatilo’s blood type did not match evidence found at various unsolved murder sites, so he was released.

A serial killer was back on the loose, and he would murder dozens more before finally being apprehended in 1990—a full six years later.

Chikatilo is the most horrific serial killer in Russia’s history—killing over 50 people—and was able to continue his spree mostly due to lack of technology at that time. It was determined only two years prior to his final arrest that blood type could differ from semen and saliva type in some rare cases, and that knowledge eventually led to his capture and conviction.

Peter Conradi’s definitive true crime account, The Red Ripper, covers everything from Chikatilo’s personal life to his horrific killings, and the hunt for a monster.

Read on for an excerpt from The Red Ripper, and then download the book. 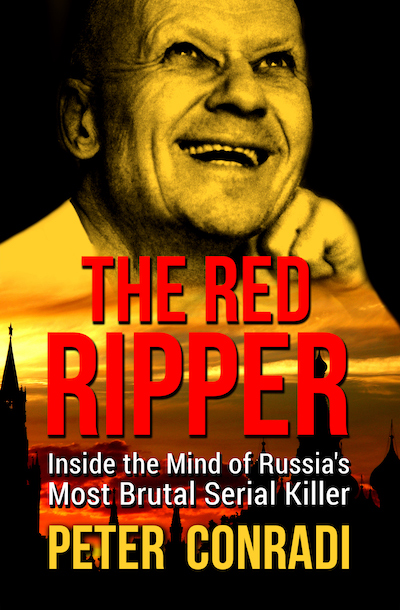 For the next nine months, Chikatilo managed to contain his urges, at least according to police records. Then, on June 12, 1982, 13-year-old Lyuba Biryuk became his next victim. She was young, clever and well-behaved, the antithesis of Tkachenko. But it didn’t save her.

That morning, before leaving for work, Lyuba’s mother asked her daughter to go from their home in a little settlement called Zaplavskaya to the nearby village of Donskoi Posyulok to buy some food. She was happy to go. The sun was shining and the weather was warm. All she was wearing was a thin blue and white floral dress and a pair of light sandals. Piecing together what little evidence there is of the last few hours of her life, it seems that the girl arrived at the Voskhod food store as planned and did her shopping; a boy later reported having seen her at the bus stop. But after leaving the shop, she apparently decided not to take the bus home. She walked instead. And it was then, at around midday, that she met Chikatilo.

He had been planning to go by bus himself, but the bus never came and so he too set off on foot. There was something about the girl that caught his attention as soon as he saw her. He fell into step beside her and they began to talk. He asked the usual questions: what her name was, what she was doing and where she was going. He was so attracted to her that he was having to hold himself back to avoid pouncing on her then and there. But there were too many people around. Somehow he managed to control himself. The talking may have been frustrating, but it served one purpose: to stay with her until the time was right.

A few minutes later that time came. After crossing the road, they began to walk along a path set back a little behind the bushes. It was a lot quieter here. There was no one ahead of them. Still talking, Chikatilo glanced round to check that no one was behind either. There was not. Even so, he waited a few seconds more for a final check. Then he seized his chance. The animal inside him took control and he jumped on the terrified girl, forcing her down to the ground. Ripping off her clothes, he tried to have sex with her. But, as before, he failed. His body was letting him down.

This time, he had come prepared. He produced a knife from his pocket and began to stab and cut her in different parts of her body. The combination of the flowing blood and her muffled cries of pain gave him the satisfaction that he craved so badly. But it cost the little girl her life. There was no time, though, for the ritual he had performed over Tkachenko. He was too close to the street. Aware that he could be caught at any moment, he covered the corpse, took her summer clothes and shopping bag and threw them into the woods. Her body was found just under two weeks later, by then little more than a skeleton.

After Biryuk’s killing, the floodgates were open. Before the end of 1982, Chikatilo was to have killed another six people. Lyuba Volobuyeva, aged 14, was the next to die, savagely killed by Chikatilo on July 25th of that year during his business trip to the southern region of Krasnodar. Nine-year-old Oleg Pozhidayev died on August 13th  when Chikatilo was on another business trip, this time in the nearby Adygey district. Back in the Rostov region, just three days later, he killed 16-year-old Olga Kuprina. Another two victims followed in September: Ira Karabelnikova and Sergei Kuzmin, within nine days and a mile of each other, just outside Shakhti. Then, in December 1982, he killed 10-year-old Olya Stalmachenok.

The killings marked the beginning of a police operation that was to be known as ‘Lesopolosa’—‘Forest Path’—taking its name from the place where almost all of the first bodies were found. Despite Rostov’s high murder rate, it was clear from the start that these were no ordinary killings. A special police team was formed and they began to investigate the murders. For the time being, though, they decided to tell the public nothing. And, in the last days of Leonid Brezhnev, the media were still rigidly controlled and did as they were told. Informing the public, the police believed, would only cause panic.