Crime of the Century: The People v. O.J. Simpson

It’s a sight etched into the memories of all those who saw it: Summer of 1994, a white Ford Bronco cruises down the empty freeways of Los Angeles, cops on its tail, crowds cheering from the onramps, and a celebrated NFL running back huddled in the back seat, threatening to kill himself.

O.J. Simpson’s slow-speed race through Los Angeles was broadcast live around the world. Viewers had no idea they’d be glued to the screen for the next 16 months, watching what would become “The Trial of the Century.”

And with FX’s The People v. O.J. Simpson: American Crime Story set to debut tonight, it’s clear that the Juice is dominating the public’s attention yet again. 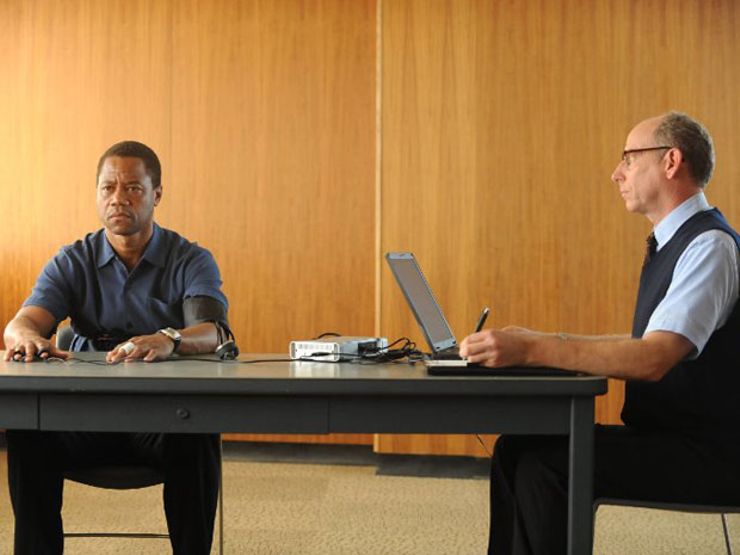 In a role that, well, fits like a glove, Cuba Gooding Jr. stars in the FX series as Orenthal James Simpson. A “Dream Team” of a supporting players rounds out the cast: Connie Britton as Faye Resnick, Sarah Paulson as Marcia Clark, David Schwimmer as Robert Kardashian, and Courtney B. Vance as the one and only Johnnie Cochran.

Episode one begins with the beating of Rodney King, providing context for the civil unrest of the era, while also pointing out that Simpson, privileged and famous, didn’t exactly identify with the African American community. As one character points out early on, “He’s got the cops chasing him. He’s black now.” 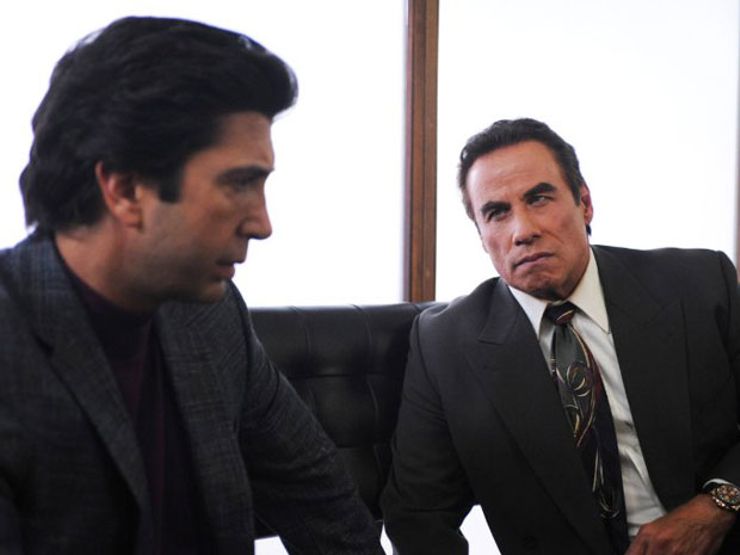 Then the show dives in, reliving everything from the slayings of Nicole Brown Simpson and Ronald Lyle Goldman to riveting moments from the trial itself. It’s a television event that critics are calling superb—though we should note they aren’t particularly fond of John Travolta’s not-so-nuanced portrayal of Simpson’s criminal defense attorney, Robert Shapiro.

That said, FX’s anthology, adapted from CNN legal analyst Jeffrey Toobin’s book, The Run of His Life: The People v. O.J. Simpson, is indeed a dramatic retelling. Producer Ryan Murphy and his players periodically bend the truth in the 10-episode series. So before you tune in, allow us to jog your memory with the facts to the infamous case. No spoiler alert necessary. 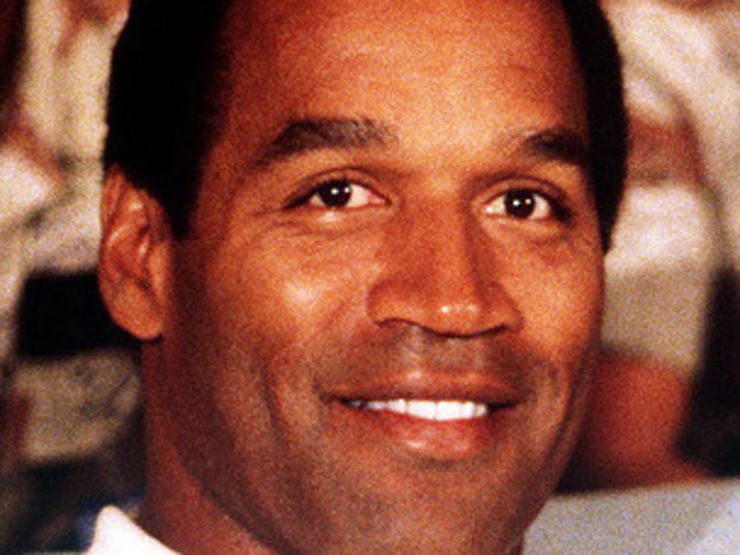 In 1977, Heisman Trophy winner and Pro Football Hall of Famer Orenthal James Simpson met a blond waitress at the Daisy, a Beverly Hills nightclub. Simpson was married to Marguerite Whitley at the time, the mother of his three children. Nevertheless, Simpson began seeing Brown. In 1979, Simpson and Whitley divorced. Six years later, he and Nicole Brown wed. But after seven years of irreconcilable differences, the marriage collapsed. She filed for divorce in 1992.

On June 12, 1994, Nicole (age 35) and Ron Goldman (age 25) were stabbed to death at Nicole’s Brentwood home. Nicole was sliced repeatedly in the head and neck; she had defensive wounds on her hands and a gaping slash so deep her larynx was reportedly exposed. Ron, a waiter and longtime friend of Nicole’s, had dropped by her place to return a pair of glasses Nicole’s mother had left at the restaurant where he worked. Still in his work uniform, Ron was stabbed and left with Nicole to bleed to death. 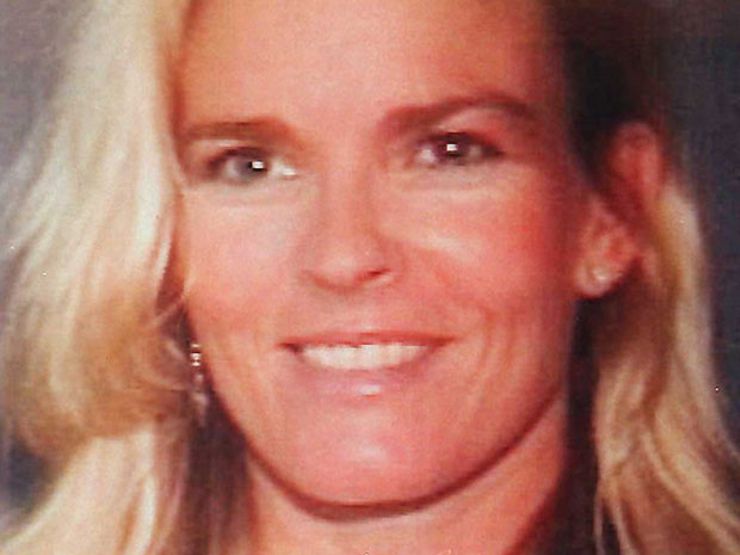 Upon discovering the grisly scene, police brought in Simpson for questioning. After a three-hour interrogation, he was released. A few days later, Nicole and Ron were put in the ground, and the LAPD charged Simpson with two counts of murder. Despite the severity of the charges, Simpson’s lawyers successfully convinced authorities to allow Simpson to turn himself in.

On June 17, at 11 a.m., a sea of reporters awaited O.J.’s arrival at the police station. But Simpson failed to show up. The LAPD issued an all-points bulletin and declared Simpson a fugitive.

At 5 p.m., Robert Kardashian, Simpson’s friend and defense lawyer, read a letter purportedly penned by Simpson. In it, Simpson proclaimed his innocence, and made a series of disquieting comments that many interpreted as suicide threats. 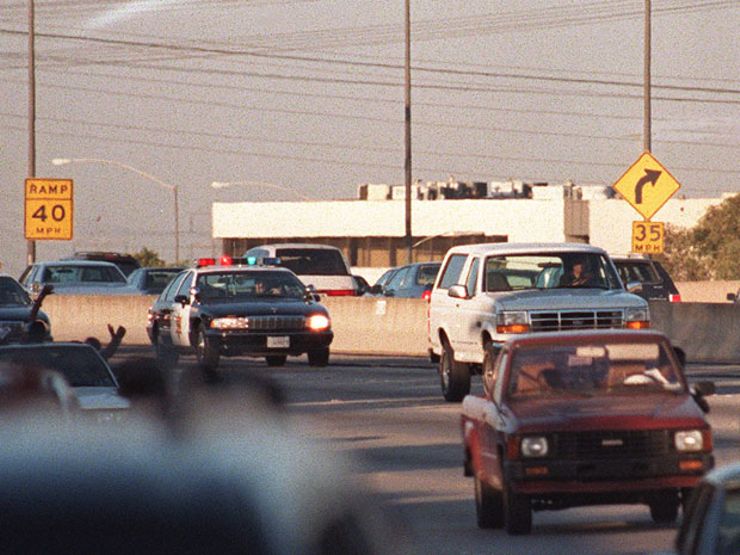 Then, at approximately 6 p.m. that evening, Simpson was spotted riding in his White Ford Bronco. Al Cowlings was at the wheel while Simpson sat in the backseat. In his possession: A passport, a disguise, and $8,750 in cash.

The two led cops on a slow-speed chase through Los Angeles, attracting over 20 police cars, a flurry of helicopters, and thousands of roadside spectators shouting from overpasses. The dramatic event ended in the driveway of Simpson’s Brentwood mansion, with Simpson put in cuffs, and the nation glued to their sets.

On July 22, 1994, an arraignment was held. Simpson pled not guilty. In January the following year, his criminal trial commenced, igniting a 24-hour media circus the likes of which the country had never seen. 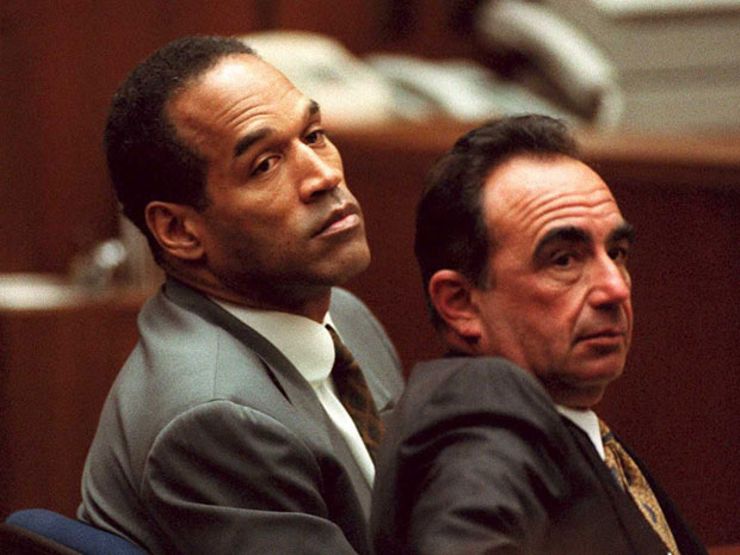 The evidence against Simpson was undeniably stacked. His blood was found at the murder scene; blood, hair, and fibers from Nicole and Ron were found in his car and home; one of his gloves was found in Nicole’s home, the other outside his own; and bloody shoeprints found at the crime scene matched footwear owned by Simpson.

However, Simpson’s “Dream Team” of lawyers, including Johnnie Cochran and F. Lee Bailey, claimed Simpson was framed by racist police officers. Simpson struggled to squeeze into the glove found at the murder site, and Cochran delivered his famous phrase: “If it doesn’t fit, you must acquit.” By this point, the trial had split the country. Police, still on edge from the Los Angeles Riots of 1992 that followed the Rodney King case, were concerned a guilty ruling for Simpson could trigger yet another wave of unrest. 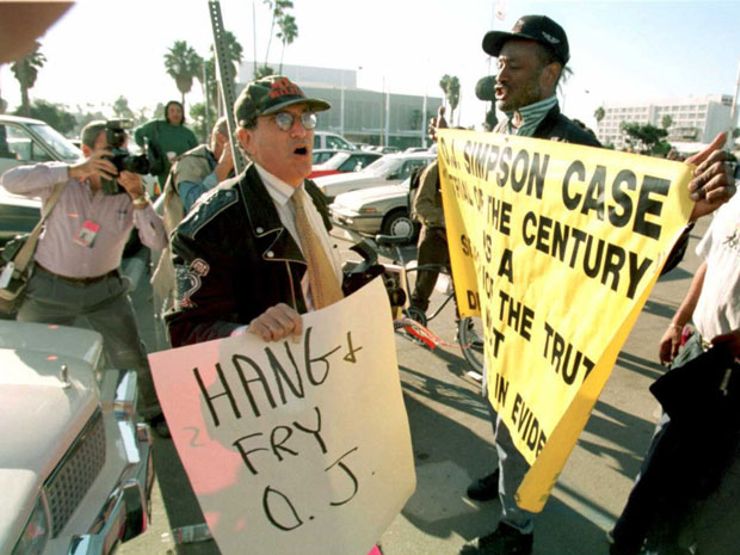 On the day the verdict, a massive line of riot police surrounded the courthouse. Anywhere from 95 to 150 million people tuned in as the jury delivered their decision of not guilty.

One year later, Simpson’s civil trial began in the wrongful death suit filed by the victims’ families. Intriguingly, the jury of that trial found Simpson liable and awarded the plaintiffs $8.5 million in damages. The rest of the punitive case played out over five months, culminating in Simpson having to give up assets that included his Heisman Trophy and a Warhol painting.

Years later in November of 2006, things got interesting once again. News Corp announced the cancellation of a two-part Fox TV interview and book purportedly written by Simpson and a ghost writer, both entitled If I Did It. The book, which was to be a hypothetical account of how Simpson would have murdered Nicole and Ron had he been the one holding the knife, caused public outrage. While the controversy ultimately led to the cancellation of the book’s original release, some copies were leaked online.

Related: HOW THE KITTY GENOVESE CASE WENT VIRAL IN 1964

Simpson’s final run-in with the law occurred a little under one year later. In September of 2007, Simpson led a group of men into the Las Vegas hotel room of sports memorabilia collector Bruce Fromong. There prosecutors contend the group robbed Fromong of his most valuable items at gunpoint. The altercation landed Simpson behind bars with a hefty bail and felony charges that included kidnapping, robbery, and assault with a deadly weapon. The jury found him guilty on all accounts and sentenced him to 33 years with eligibility for parole after nine. Simpson’s attorneys filed appeal after appeal, but his conviction was upheld. 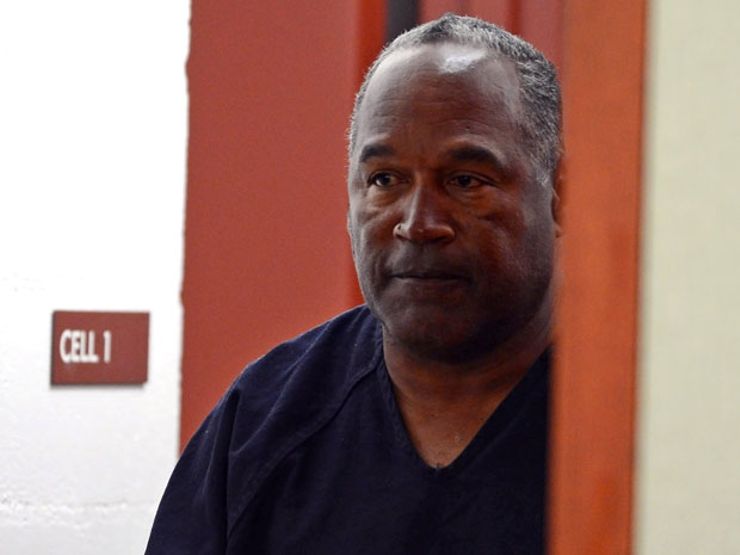 Now 68, Simpson spends his time in a cell at Lovelock Correctional Facility in Nevada. He’ll be eligible for parole in 2017. No doubt he’ll be tuning in tonight if he has access to a set.

So will the FX series stack up to the stranger-than-fiction case of the real-life O.J. Simpson? There’s only one way to find out.