The Most Horrifying Science Experiment Ever

Crime novelist Peter Dickinson explores the dark side of science in this chilling tale set in a Caribbean paradise.

Most of us avoid rodents at all costs, but the protagonist of Peter Dickinson’s mystery thriller Walking Dead uses them as subjects for experimentation. That is until he finds himself as the helpless subject caged in one sick and twisted occult experiment.

By day, David Foxe works in a lab, poking and prodding rodents in the name of scientific research; by night, he’s snuggled up next to a warm body: his pet rat, Quentin. So when his Company sends him on a working vacation to the Caribbean, he willingly packs a bag and tucks Quentin into his shirt pocket.

Once there, things seem to be going fine – aside from the fact that the island’s governed by an occult with bizarre supernatural beliefs. But, hey, what’s a little voodoo when you’re in paradise, right? Wrong. When Foxe finds a dead woman in his lab, his seemingly tranquil life gets turned upside down.

Arrested on bogus terms, Foxe gets put under the authority of the stoic Captain Angiah. Sensing something fishy other than the catch of the day, Foxe reluctantly goes along with it. Obedience that proves to be a big mistake. The captain’s taking him to prison. But it’s not just any prison. And it’s not just any prison sentence. Foxe has a job to do. An experiment. On “animals.”

In the excerpt below, Dickinson describes in vivid detail Foxe’s journey from freedom to captivity via a mysterious manmade tunnel. Where there’s usually light at the end of the tunnel, here, there’s only The Pit. A sublevel hole reminiscent of the Roman arenas that saw gladiators take on nature’s beasts, the noxious dungeon is now Foxe’s new office, lab, and, even worse, home.

But it’s not the stank of the underground hole, nor the vast quantity of nonchalant guards toting machine guns that make his stomach turn – it’s the realization of just what Captain Angiah means by “animals.”

Read on for the excerpt from Peter Dickinson’s Walking Dead. Then download the book on Amazon, Barnes & Noble, and iTunes. 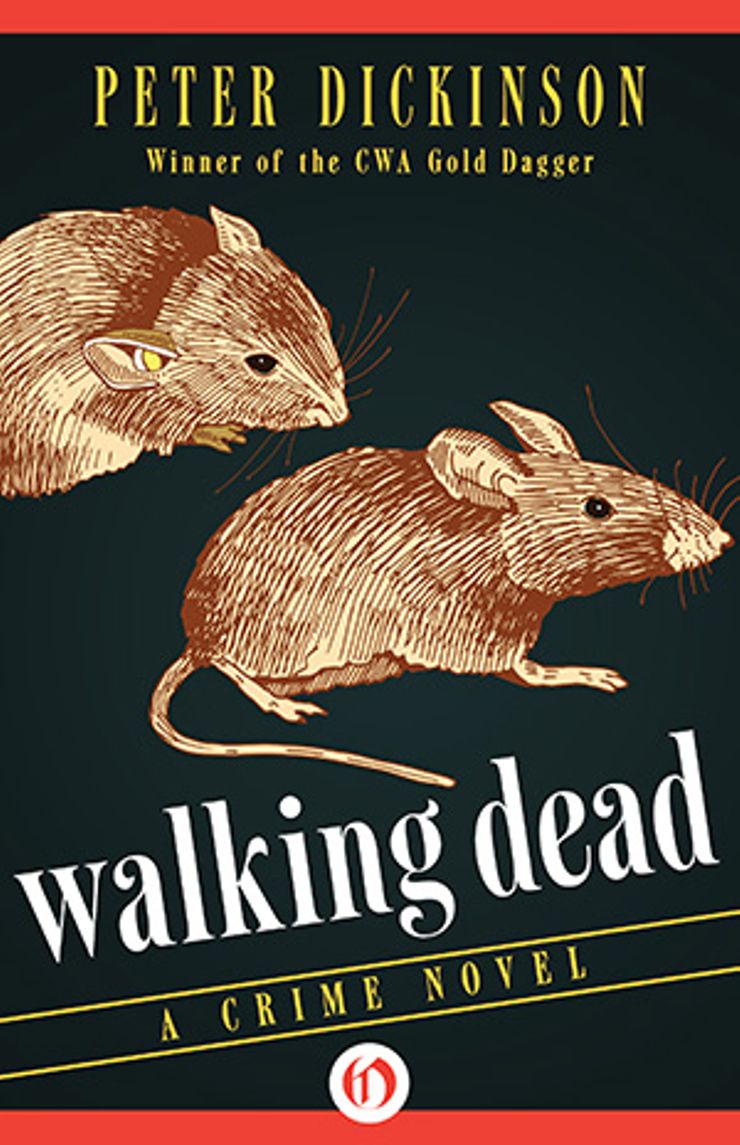 Foxe, Captain Angiah and Mr Palamine walked back along the quay together. Once again they had to halt and wait for the engine to pass, and this time Foxe watched it with a sense not of strangeness but of familiarity; the feeling puzzled him for a moment, because he knew it traced back to long before yesterday, and then he found that his mind had meshed unlikely images together, human and mechanical. The machine was a Dreiserism, in fact it was very like Dreiser himself, in its jerky and flailing motions, its intricacy and inefficiency, its huge effort to moderate ends … This time too, because he had approached from the opposite direction, Foxe saw the driver and fireman leap from the footplate just as the cliff began to swallow its meal of smoke and iron. Mr Palamine chattered questions which Captain Angiah answered in mutters and monosyllables, strangely more contemptuous than his earlier replies to Foxe. Together they saw the Consul into the Presidential helicopter and then stood clear while it battered its way aloft.

“Now I must show you your animals,” said Captain Angiah, pitching his voice above the thudding of retreating rotors and at once turning on his heel.

Afterwards it was impossible to remember at what point Foxe realised what he was being asked, or ordered, to do. Was it at once, clued by the dryness of the Captain’s tone and the manner of his turning? Was it as they were ducking through the little wicket in the vast, iron-studded gate? Foxe would have liked to think so, but in that case why had he said nothing, merely gazing with a growing sense of uneasy dread at the scene inside the castle wall? In a way it was like Back Town all over again. The courtyard was about fifty feet deep from the gate to the cliff, but four or five times as wide between the two points where the masonry met the living rock, and the whole of this area was crammed with ram shackle hutments, far larger than the Back Town houses but with the same improvised and tumbledown air. The place stank. 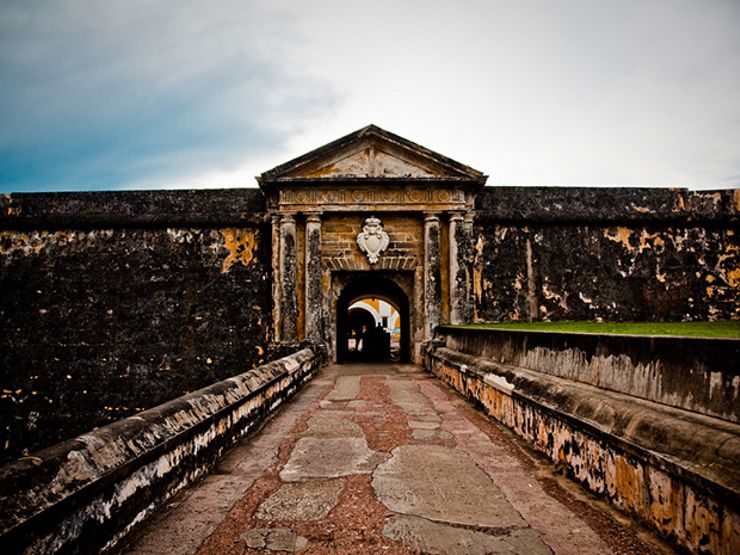 As Captain Angiah led the way through this muttering barracks towards the cliff, Foxe’s sense of dread increased. It was this that later made hindsight so difficult. At one point he was looking, weary and frightened but still with daytime eyes, at the prison camp and the castle, and next everything became wavering and monstrous through the lens of fear. Not even the normal processes of self-respect, which after a crisis tuck away the loose ends of nightmare and repattern one’s cowardice and stupidity into a memory one can live with, could change that. Fear was, and remained, the major colour of the next few minutes—like one of those obscure Rembrandt etchings so hatched with that seeing it one is more conscious of the experience of ink than of anything the picture portrays—a blackness, in the middle of which something is happening.

In a clearing of consciousness Foxe waited swaying at the door of a hut by the cliff while Captain Angiah, just inside the door, snapped orders at a lounging soldier, who picked up a telephone and spoke. Outlined against the brilliant sky and seeming black as masonry and cliff two soldiers manned a machine-gun on the castle rampart. Laughing they traversed it across the courtyard and sighted on Foxe. A motor purred. Captain Angiah shouted angrily at the men with the gun, then took Foxe by the elbow and led him between still-sliding doors into the cliff.

“Volcano made this one too,” he said.

Even in his stupor Foxe was aware that the tunnel was not man-made, only man-improved. It was lit by electricity and its floor was smooth, but the walls and roof were unchanged since the raging gases of the volcano had burst out through the rock, leaving a tunnel that widened and narrowed erratically, like the intestine of a stone giant. It seemed to suck Foxe along; his legs, against all his mind’s desires, followed the Captain’s loping stride as if they’d been taken over by his autonomous nervous system. These effects he later guessed had a cause outside the rationale of nightmare, because the tunnel sloped steadily down, swinging to the right as it did so. The sharp lights passed like the hammer-pulse of fever. The air was dry and cool and almost odourless after the reek of the castle courtyard. The Captain’s crêpe-soled boots set up soft whimpering echoes, the footsteps of invisible companions. The lights were too close together to cast any real shadows, Foxe longed to fall, to crumple, to faint and be unconscious, but his legs refused even to stumble.

And then there was an end. A big man seemed to emerge from the tunnel wall and saluted Captain Angiah, beyond whom the monotonous glare of the tunnel changed. There was a brighter, whiter light below and real darkness above, and between them a sharp line of black which Foxe only focused into a handrail when Captain Angiah stopped, leaned on it and looked down. Foxe’s legs drifted him forward to stand beside him.

“There are your animals,” said Captain Angiah.

“I won’t do it,” said Foxe, speaking all at once with the clarity and firmness of plain day.

They had come out from the tunnel onto a narrow timber gallery which ran out of sight along the rock face to left and right. The handrail was its balcony, and beyond that was a huge pit, fiercely lit. The effect was as if Foxe was standing on one of the lower tiers of a Roman circus arena. Up here was safety and relaxation—a couple of soldiers, a few feet along the gallery to Foxe’s right, were lounging against the rail, smoking, bored; down there on the pocked and scuttered sand were the victims of the show. The lights were fixed below the gallery, leaving it in deep shadow and thus adding to the sense of privacy and security. The difference between the two levels was only about twenty feet, but it seemed as sharp as the difference between night and day.

Foxe didn’t at once grasp the size of this cavern. Later, when he was used to it, he guessed that a great plug of lava must have risen inside the rock like a piston rising up a cylinder, compressing above it the superheated gases which had first melted this bubble in the solid rock and then escaped along the fumarole which was now the entrance tunnel. Then, miles below the surface, the pressure had eased and the lava plug had sunk, again like a piston, leaving this pit. No doubt there were other tunnels, many undiscovered, riddling the now-cold rock, a meaningless maze. There was the one along which the mad engine crawled, too.

But for the moment all Foxe saw was an over-arching darkness beneath which on the flood-lit arena was a kind of crude encampment through which men moved. Foxe’s words came back as echo, hovering in the dark.

Want to read more? Download the book on Amazon, Barnes & Noble, and iTunes.