The Headsman is More Than Just a Local Legend

Centuries ago, a small town executioner disappeared. But those who believe the stories know that he occasionally returns ... seeking payment in blood.

The people of Braddock, New York are haunted by a terrifying legend: A local executioner, who vanished two centuries ago, is said to periodically return to the town … for blood.

Teenager Marcy Dickens has heard these stories since she was a young child, but she doesn’t know what to think when she’s awoken in the middle of the night by a loud thump, followed by footsteps on the stairs outside her bedroom. As the footsteps get louder, Marcy is jolted wide awake …. and she can’t convince herself it’s just a dream anymore.

As Marcy hears the terrifying footsteps of a hulking monster, across town Karen Wilson is suddenly seeing through the eyes of a killer. And that’s just the beginning of this waking nightmare.

In James Neal Harvey’s supernatural thriller The Headsman, a frightening legend becomes a reality—and he’s determined to make life a living hell for everyone in the upstate New York town. 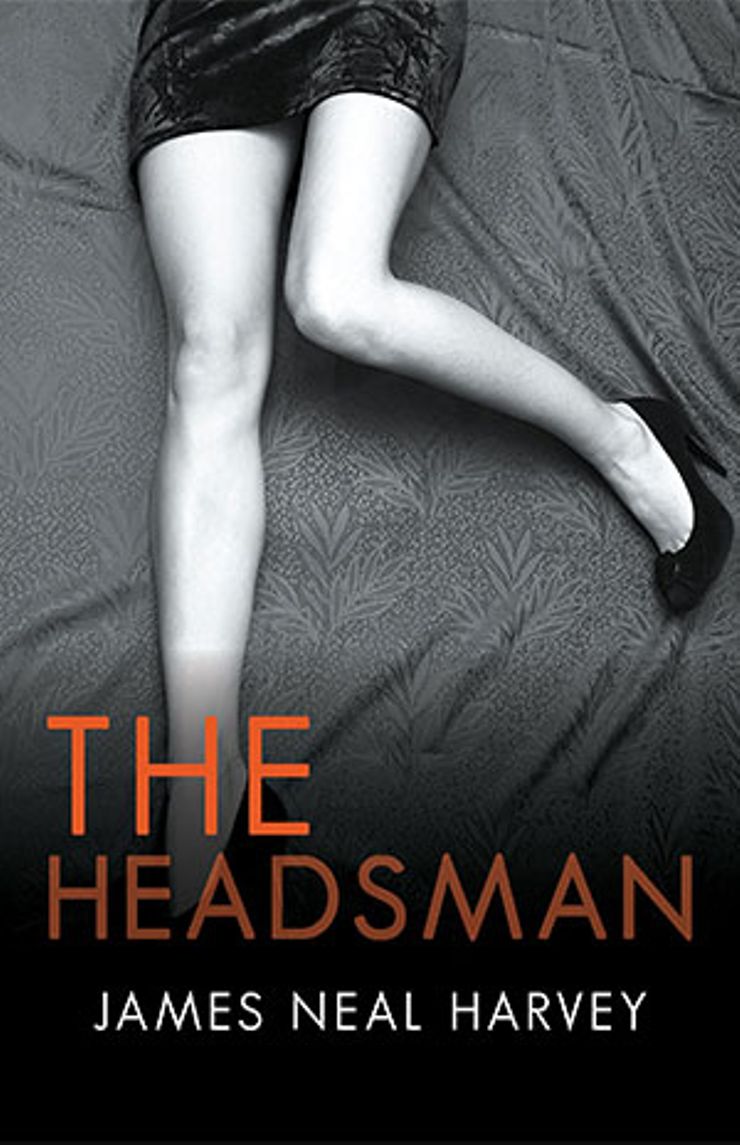 The interior of the house was in semidarkness, illuminated only by the light in the center hall. Her parents slept in the back bedroom on this floor, and her room was upstairs at the front of the house. Marcy was the only child in the family. Her mother had nearly died when she was born, and the doctor had been forced to deliver her by caesarean. Afterward the doctor had tied her mother’s tubes. Marcy had often wished she had a sister when she was little, but now that she was older she realized if she had it probably would only have added to the stress. God knew there was enough of it around here as it was. She stepped quietly through the house and made her way up the stairs.

Once in her bedroom she shut the door and undressed, and then went into her bathroom, where she washed her face and brushed her teeth. Her pink cotton shorty nightgown was hanging from a hook on the back of the door. She put it on and got into bed and turned on the radio, tuning in WBDK, the local station. She listened to Phil Collins and then Paula Abdul without really hearing them. After a few minutes she switched out the light and a little while after that turned off the radio as well.

Outside the wind was really kicking up now, sharp gusts bending the limbs of the oak trees until the tips scraped against the roof like giant fingernails. On some part of the house a shutter was banging, and in the distance a dog howled. She pushed herself farther down under the covers. Maybe a storm was coming and they’d get more snow. She hoped not.

She had trouble dozing off, which was unusual for her. As hard as she tried to send her mind in other directions, her thoughts kept returning to Hathaway and the assignment he’d given them. What would she do if—

But it wasn’t the assignment, was it? No, it was the mental picture his words had inspired. It was like a vicious little animal, struggling to get inside her head and her emotions and stay there. She kept pushing it back, shoving it away from her, refusing to acknowledge it, until she fell into a troubled sleep.

An hour later she found herself awake again. What had she dreamed? It was something terrible; despite the cold air in the room she was covered in sweat. She brushed her fingers against the skin between her breasts and felt the moisture there. Her head was hot and she couldn’t think clearly.

A noise sounded somewhere below, like the heavy thump made by a man’s footstep. She was instantly alert, her ears straining to catch the slightest sound.

And then she heard it again.

There was no mistaking it now—the sound was that of a footstep, and it was on the stairs below her bedroom. Even though she had closed her door, there was no doubt in her mind as to what she had heard. Her hand shot out to the lamp on her bedside table and she turned it on.

Instead of reassuring her, the light that bathed the room seemed strange and distorting, as if she were looking though a faintly yellow lens that bent objects out of shape.

The noise sounded again. It was louder now, and she thought she also caught the rasp of air being sucked into a man’s lungs and then exhaled. Jesus Christ. Was she still asleep? Was this all part of the same weird dream?

But she was awake, as much as she wished she weren’t. What she was hearing was real. There were footsteps on those stairs, heavy footsteps made by a heavy man. He was coming up the stairs very slowly, one step at a time.

Could it be her father? No—he never came up here, especially at night; he was too loaded.

Buddy, maybe, playing some dumbass practical joke? He wouldn’t dare. She’d kill him. Or Jeff? He was the one who’d suggested dressing up and—no, that was ridiculous.

So who—or what—was on those goddamn stairs?

She called out: “Daddy—that you?”

It made no sense, but she tried anyway: “Buddy? Buddy Harper?”

Still no answer; only the sound of the footsteps reached her ears. She shrank back against the headboard, pulling the covers up around her neck, her heart pounding. 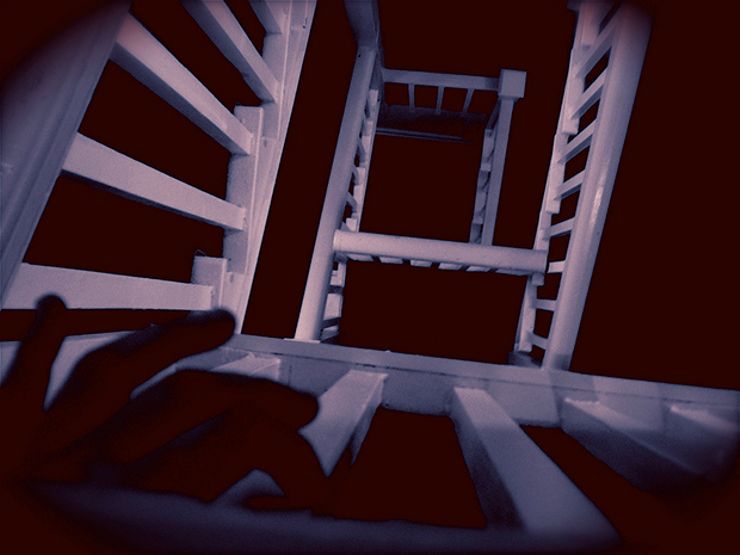 The footsteps stopped. For an instant she tried to convince herself she’d only been imagining this—that it was the result of that fool Hathaway planting an idea so deep in her mind it wouldn’t leave her alone.

But then she heard the sound of breathing again, and realized that the reason the footsteps had stopped was because whoever it was had reached the landing and was standing there, just outside her door. She lay trembling, trying desperately to think of some way to protect herself. There was no lock on the door, but maybe she could barricade it. She could slip out of bed and steal across the floor to her dresser and shove that into place.

Which was foolish. She wasn’t sure she could move the dresser at all; it probably weighed a ton. And even if she could move it the noise would be horrendous and a sure tipoff as to what she was attempting. And how did she know it would keep somebody from forcing the door anyway?

Maybe her chair would work. It was a plain, straight-backed wooden one, and she had seen people on TV jam a chair like that under a doorknob. She got out of bed without even rustling the sheets and tiptoed toward the chair. It stood on the far side of the room, only a foot or two from the door.

Once she got hold of the chair she’d have to be quick, she told herself. Grab it and stick it into position as fast as possible. And then she’d yell her head off. Her father might not hear her, but maybe her mother would.

A floorboard creaked under her foot. She froze for a moment, biting her lower lip. Then she took another step, praying it wouldn’t create more noise. Only two or three more steps to go.

It didn’t swing wide or bang open, but instead opened noiselessly and very slowly. It opened into the room, and because of the angle the landing was in shadow. She couldn’t see who or what was there.

Her heart was hammering now and she couldn’t breathe.

And her imagination was playing a horrible trick. It was making her think there was a man standing in the darkness looking in at her—a big man dressed all in black.

But it was no trick.

He stepped into the room, and the sight was her worst nightmare come to life. Everything was black, from his head to his feet. The eyeholes in the black hood were cut at an angle, so that his head looked like that of a giant cat. Or a devil. A black tunic covered broad shoulders and a deep chest, and his legs were encased in black tights. On his feet were black boots. And his huge, black-gloved hands grasped the haft of an enormous, double bladed ax.

Marcy opened her mouth to scream, but her vocal cords seemed paralyzed. As hard as she tried, she could make no sound. Her head was whirling; she was having trouble keeping her balance.

The man in black stepped toward her, and she raised her arms to ward him off. The back of a gloved hand smashed into her jaw and she sprawled to the floor. She looked up, cringing in terror, and at last she found her voice. A scream came boiling out of her mouth as he raised the ax.

Want to keep reading? Download The Headsman on Amazon, Barnes & Noble, and iTunes.