On January 1, 1973, Catholic schoolteacher Roseann Quinn was stabbed 18 times by a stranger she brought home from the bar.

Roseann Quinn was the picture of innocence: A Catholic schoolteacher, beloved by the eight-year-old students she taught at St. Joseph’s School for the Deaf in New York City’s Bronx. This made it all the more shocking when she was murdered in her apartment on New Year’s Day in 1973, stabbed 18 times in the neck and abdomen.

During the course of her murder investigation, a very different portrait of Roseann emerged. Her neighbor claimed she would frequently bring home strange men from the nearby bar, and one time, upon hearing screams, the neighbor emerged to find Roseann in the hallway with a black eye, sobbing.

As well as being an accurate account of a tragic murder, Fosburgh’s book poses the question: Just how much do we really know about the private lives of those closest to us?

“It was a mess,” Joe Willie told Danny later. “It looked like it hadn’t been cleaned in weeks.”

Clothes were all over the floor. A box of sugar had spilled on the floor. The sofa bed was unmade, opened out into the middle of the room, and there were dirty dishes in the kitchen. Spaghetti sauce had dribbled down the front of the stove, and orange juice had hardened on the floor.

The 23-year-old man looked around with the eyes of someone who had always lived in a spotless house and liked it that way. His sense of the woman shifted and took on an element of disgust.

Katherine got some grass from a tin on the windowsill. Joe Willie tried to roll a joint, but he’d drunk too much and he couldn’t do it. His fingers slipped.

“I’ll do it,” Katherine said, taking the papers. She acted irritated, as if he’d done something wrong and he felt it. She didn’t talk much. They leaned back against the pillows on the bed and smoked in silence.

Then after a while he reached over to touch her. Her breasts were little and he felt them. Picking up a book of matches she lit the red candles by the bed and turned out the light. He began to unbutton her blouse and feel her skin. She stood up to take off her pants and turned then to hide the angle of her back. She stepped out of her underpants and dropped them on the floor beside the bed. He undressed, too, took off his blue plaid shorts, and lay down alongside her.

Nobody knows. And the only versions left are Joe Willie’s, and this is one version:

“First we balled.” And then, finished, he said, they were lying on the wrinkled sheets when “she went nuts and started pushing me physically to hurry and get dressed and leave. She was very nasty, a complete reversal of a few moments before. I have problems with my mines [sic] and I often flip out, not knowing whether walls, people, etcetera, are real. I hear things, I think sometimes I can even fly.

“Well, she started shoving me and I blew up, not mad, I wasn’t mad or anything, just very cold and hurt. I grabbed her and held her on the bed and tried to talk to her, to get a reason for her sudden rejection of me. She started saying kill me, kill me, please. I had no intention of killing anyone when I went there. Then she said I was crazy, she could see it. She tried to get up so I grabbed her around the throat and started choking her. I choked her for a long time but when I flip out I can’t see too well and I thought she was still alive. I then took her pants, which were on the floor next to the bed, and choked her with them for a long while. I hit her a few more times and then I went to the kitchen and got a paring knife and I stabbed her several times, once hitting the jugular vein.

A torrent of blood spurted up out of her neck. It splashed in his face and made a huge, grotesque picture on the wall behind the bed. Blood was pouring from her body. It spilled out over Joe Willie’s stomach and along his arms and legs. He went over to the windowsill and got a large red candle. “I stuffed it in her vagina,” he said, “and it broke off in my hand.”

Then he got to his feet. He stood in the middle of the room by the bed; his arms were hanging out at his sides, and his penis was large and full. The end was big, round, the rest of it long and thick. He stood there breathing and breathing. He looked back at the schoolteacher. Her eyes were open, staring in terror, her body spewing out blood.

He looked at her more. Then he reached out and laid his fingertips tenderly on her eyelids. He moved them slightly and brought the open, frightened eyes to a close. “She didn’t look good that way,” he said later, “and I didn’t want her watching me.”

Then, his body covered with her blood, he went to the bathroom and turned on the shower. He washed himself, and the water flowed red down the drain. It was three thirty. He went back into the room and, with the faucet still running behind him, he picked up her turquoise blue bathrobe. He laid it across the wounds of the body. He said he thought “she looked better that way.”

Then he went around the apartment, turning over chairs, and emptying out drawers. He took her wallet and some money, and the white lace slip, and as he was leaving he picked up the large white statue of Katherine Cleary and, in one last surge of anger, he threw it hard at her face. 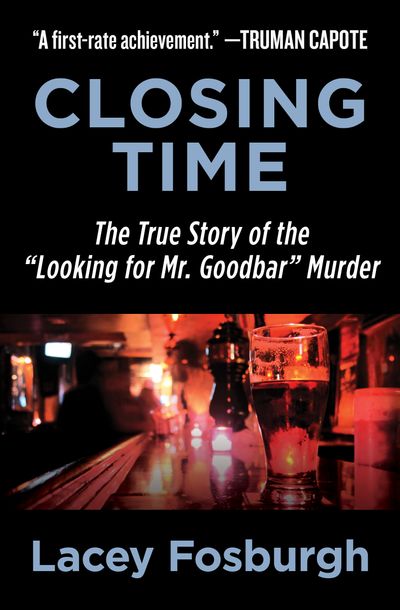