The Dreamstalker Swallows You Up in a Living Nightmare

There are some horrors you can't wake up from...

We've all tossed and turned in our sleep, shuddering through a vivid nightmare. Sometimes we awake and immediately forget the horrors our subconscious conjured. Other times we carry the unease of our imagination with us through the whole day. But what if the terrible things you dreamt up came to fruition?

For teenage Karen, this frightening situation is her reality. Her dreams are filled with horrific things—things she can't usually recall until waking. But one day her dream comes back to her in exact detail, a mirror of the very real murder of a classmate. As her morbid dreams continue, so does the rising body count. Is Karen a psychic, or is she somehow the cause of all this tragedy?

Read on for an excerpt of The Dreamstalker, then purchase the book! 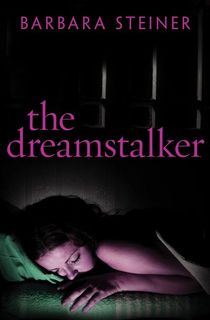 He can’t breathe. He doubles over and sucks in air, but none reaches his lungs. His wheezing gets louder and louder. Soon he is whistling when he inhales. The boys think that is hilarious. Their laughter surrounds him, echoing through his head, down into his throat, filling his lungs with their squeals and shrieks.

He struggles. They laugh. He falls. They shriek. He lies still. They walk away, pounding each other on the back and bending double with hysterical laughter. It is a good night’s

Karen woke. She lay twisted and tangled in her bed clothes, the sheets wrapped around her legs like soft yellow manacles. She was sweating and freezing, all at the same time. Her mouth felt dry and her head ached. She needed to go to the bathroom. What time was it? It was barely light, but probably time to get up. She certainly didn’t want to go back to sleep.

When she stood in the shower, turning the water up as hot as she could stand, she tried to remember the dream, the dream she knew she had lost the minute she jerked into consciousness.

Why could she never remember? It frustrated her even more now that they were taking the special psychology class. Everyone else remembered his dreams. Why couldn’t she? Dr. McArthur said that everyone dreams, but not everyone remembers. She wished he hadn’t commented that maybe she didn’t want to remember. Immediately her twin brother, Kerr, and her boyfriend, Jesse, had started to tease her.

They were horror dreams, Kerr said. She was such a goody-goody, she had to be awful, do terrible things at night. That way, no one would know. She would still be popular.

She turned so the water pounded her neck and shoulders, then laughed and shrugged. Who knows? No one would, unless she could start some recall. Maybe she was trying too hard. All she knew was that sometimes, like this morning, the dream woke her up. Or that it was so stressful, she couldn’t continue in it. So she woke herself up.

She dressed quickly, wearing her favorite yellow sweater, and hurried down to breakfast. Her father had left early, as usual. He was a workaholic. Certainly the opposite of their mother, who yawned and tried to pour herself a cup of the coffee that Dad had left ready for her.

“Here, Mom, let me do that.” Karen took the glass pot from her mother’s shaky hand and poured a mug full. Then she took the cup to the table and pushed her mother gently in that direction.

Quickly she scrambled four eggs, three for Kerr and one for herself. The toast popped up just as her brother flopped at the table and poured himself a tall glass of orange juice.

“Just once, you could get down here in time to cook the breakfast,” she said, only half teasing. She scraped off most of the yellow mess onto Kerr’s plate and dumped the rest on hers. Grabbing the two slices of toast, she dug the butter out of the cluttered fridge and plopped the crisp bread on Kerr’s plate.

“You’re doing fine.” Kerr smiled, and she forgave him. Who wouldn’t? Not only was he tall and handsome and charming and intelligent, he was a masculine version of herself. Hating him for being lazy—hating him for any reason—would be like hating a part of herself.

Night Terrors: Why Do We Wake Up Frozen in Fear?

She wasn’t handsome, but she knew brown eyes and dark curly hair looked good on her, too. There was one guy in her life who told her so every day.

She looked at Kerr. Damp curls framed his face. He was still smiling at her, then grinning, teasing her. It made her want to hug him and tell him she loved him, but she didn’t. He was spoiled enough now.

“What’s so funny?” She wiped her mouth with a napkin. “Have I got egg on my face?”

“No, big sister, you look fine. And I feel great. I slept like a baby. And I have three dreams for Dr. McArthur.” Kerr buttered his toast and started to eat, shoveling in the eggs.

“I think you’re making them up.” Karen was even more frustrated by Kerr’s successful and fanciful dream life. “You’re showing off as usual.”

“You know I don’t. I think I’m trying too hard.” She stared out the window and changed the subject. “It’s snowing again. How can it snow so much this early in October? I don’t ever remember this happening before. There must be twenty inches piled up by now.”

“It’s almost winter. We live in the mountains, at seven thousand feet to be exact. What do you expect?” Kerr tipped back his head and drained his glass. “I like it.”

“I’m so tired of it.” Their mother said her first words of the day.

Karen took a good look at her mother. There were dark circles under her eyes, and she looked pale. “You seem tired all the time, Mom. Why don’t you get an appointment with Doctor Young? Get a complete checkup.”

“Maybe I will after this storm lets up. The roads will be terrible.” Mrs. Newton pulled her robe tighter as if just watching it snow made her cold.

Karen turned back to her brother. “Kerr, I need a ride to school. Jesse had to go in early to make up the test he missed because of Friday’s out-of-town game.”

“That’s the penalty he pays for being such a jock. There’s no reason for him to come out here and get you every day, anyway. He’s just being a macho football hero to impress you.”

“Certainly being a jock or a macho athlete isn’t something you lose sleep over.” Karen felt tired from the sleep she was losing, and it seemed to be happening more often—waking and knowing—knowing a dream had disturbed her. Then she would lie there for an hour trying to remember, sometimes with a vague fear of going back to sleep.

“If I wanted to play football, I’d play football.” Kerr took his dishes, rinsed them, and placed them in the dishwasher.

Karen sat over her cup of tea for a few more minutes after Kerr left the kitchen. She knew that was right. Kerr could do anything he set his mind to do. She had always felt stronger than him physically, which might have come from having been born first and having weighed more. But Kerr was a match for her mentally any day of the week. In fact, she thought he was probably much smarter, but she’d never admit it. Especially when he flaunted it so. He was smarter than anyone they ran around with, and he knew it.

Coffee was helping Mom wake up. “Can you and Kerr stop at the store on your way home, Karen? I’ll make you a list.” She searched the pockets of her old robe for a pencil.

“Oh, Mom, you go get groceries. It will get you out of the house. The roads will be plowed, especially by noon. Don’t be such a chicken driver.” Karen chided her mother gently, but she meant what she said. She was pretty sure her mother hadn’t left the house for days.

“Why should I go out when the two of you will be in town anyway? Shopping won’t take you long.”

But it will make Kerr angry, Karen thought. He wasn’t the least bit sympathetic to their mother’s fears, the depression she had fallen into of late, whatever problems she dwelled on that kept her practically a prisoner in their house.

There wasn’t time to keep protesting. Karen grabbed the grocery list, kissed her mother quickly, then dashed to finish getting ready and catch her ride with Kerr.

Kerr had the car warm by the time she got in. They lived up Little Cub Creek Road, about three miles from school. Snow was piled in soft pillows on all the evergreens as they

“Oh, Kerr, the snow is pretty.” Karen stared out the windows of Kerr’s four-wheel-drive Toyota as they drove toward town. “It’s the prettiest winter—well, fall, actually—I can remember since we moved up here.”

“The snow makes me feel safe.” Kerr concentrated on his driving. The back roads hadn’t been plowed.

“What a funny thing to say.” Karen looked at him. “Why?” Kerr shrugged as if he’d already forgotten he’d said such a thing. He speeded up a little and spun into the school parking lot, making the car fishtail. A trio of girls laughed and jumped onto the sidewalk, pretending to be scared. It was the attention he had expected from the stunt.

Karen smiled at him and shook her head. She stepped down from the high car seat and looked for her best friend, Alysia.

“Karen, there you are. Did you listen to the news on the way over here?” Alysia took her arm, practically whispering.

“You didn’t hear about Gordon Anderson?” Alysia’s eyes were huge, like bright blue cornflowers in a spring meadow.

“I said I didn’t.” A sudden fear swept over Karen, making her lose patience.

“Dead? You mean like in cemetery dead, funeral dead?” It was the last thing Karen wanted to hear.

“What could be worse than dead?”

“Oh, Karen, it’s awful.” Alysia hooked her arm into Karen’s, huddling close to her, eager to share the details of her story. “His mother found him in his bed, stark naked.” She giggled a little. “He was lying on his stomach, and there was a huge yellow stripe painted down his back. And that’s

not all—get this. His mouth was stuffed full of daffodils. They figure he suffocated.”

For the first time in a month, Karen remembered a dream. The dream that had waked her this morning. And she wished she hadn’t.

When Psychic Visions Lead to Murder

Want to keep reading? Click below to purchase your own copy of The Dreamstalker by Barbara Steiner!