The Dingo’s Got My Baby: The Case of Lindy Chamberlain

During a camping trip at Ayer’s Rock, Australia, Lindy Chamberlain’s nine-week-old daughter Azaria was snatched away by wild dogs in the night. But who was really to blame?

During a camping trip at Uluru, Australia in 1980, Lindy Chamberlain realized that her 9-week-old daughter, Azaria, had been snatched away by wild dogs in the night. And the nightmare only continued from there. Despite the fact that no murder weapon, body, or motive was ever found, Chamberlain was tried and convicted of her daughter’s murder in 1982.

Winner of the 1986 CWA Gold Dagger award for non-fiction and the inspiration for the film A Cry in the Dark (starring Meryl Streep as Chamberlain), journalist John Bryson’s book Evil Angels pieces together the fascinating trial leading up to one of Australia’s most notorious wrongful convictions—beginning with that fateful night when baby Azaria was taken.

Want more chilling and mysterious books? Sign up for The Lineup's newsletter and get the eeriest reads delivered straight to your inbox. 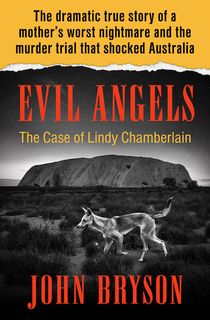 Sally Lowe heard the baby cry. Not loud, but sharp in the cold air, and somehow unfinished. It was this property of curtailment which moved her to look at Lindy. Lindy was not bothered and, given that a mother’s ear for the sounds of her own is naturally more accurate, it seemed best to Sally Lowe that she hitch her Chantelle higher on the hip and say nothing.

Considerations of parental infallibility were lost on Aidan. ‘That was Bubby crying,’ he said fearlessly. Michael then agreed he’d heard it too, and Lindy turned for the path, through the low bush to the tent, with skeptical strides.

‘But she was fast asleep,’ she said.

From then on, it would seem to everyone that things happened in different dimensions of time for each of them.

Lindy Chamberlain’s quick legs, as she makes over the scrub, take on the jerky impulses of panic. She falters, but this is associated somehow with taking the last eight or 10 paces to the tent at a run. Sally now realizes that Lindy has shouted something to them all, something terrifying and engulfing, but cannot yet arrange the meaning of it in her mind. An earlier thought is not yet displaced: the sports parka Lindy has on looks comical over a floral frock and bare knees. Lindy, who curiously seems to be the only one with the capacity for movement, drops to all fours and scrambles inside the tent. It is her reappearance then, with unrewarded arms, that locates for them what it was she had said.

Sally, sturdily akimbo, thinks she has heard the word ‘Michael’ before anything else, and makes an effort to look at him. Greg, leaning on the bench, misses the first words but is slowly getting the rest. Michael, holding over the flame his wife’s tardy meal, seems to understand least of all. And Judy West, now bolt upright in the chair inside her tent, has heard the cry, ‘My God. My God. The dingo’s got my baby.’

Greg was the first to escape whatever force it was that held them down. By the time he reached Lindy she was already at the rear of the tent, facing the road. Michael was now abreast them, but not yet abreast the train of events. ‘What?’ he said. Lindy’s response was no answer but an attempt to part the currents of turmoil: ‘Will somebody please stop that dog?’

But Greg could see only an empty road and night beyond. ‘Where?’ he asked. ‘That way,’ she pointed, across the road and to the right. That way was pitch black, a fact which struck them with the force of a new and unpredictable circumstance. They needed light. Lindy threw back her head. ‘Has anybody got a torch?’ she shouted.

Sally Lowe made for her car. Aidan scrambled to find the torch he had a minute ago. Judy West, who had found no one at the barbecue, reached them all in time to grasp what was going on and headed back for Bill and Catherine and for a lamp. Greg snatched a flashlight from Sally’s advancing hand, as though he were about to run the final leg of a relay race, and sprinted for the brush.

There was an inexplicable moment between the assent of the switch and the sudden expression of light. The tops of bushes shone back, unruffled. The shadows were dark and abrupt. The brush seemed more tangled than it was in daytime, the sand softer. Spinnifex and wattle slapped his thighs. Somewhere to his right, he could hear someone else stumbling through the growth. Greg held the beam higher. It was Michael, threshing the scrub aside with both arms and squinting at the ground. Evidently he hoped the dingo might have discarded his baby in flight. He had no torch. The blind flailing of those arms moved Greg to a declaration of sympathy and of common anguish, but the thought was inexpressible.

‘What a hell of a thing to happen,’ was the best he could do.