Sol Wachtler: From Chief Justice to Stalker to Convict

When he wasn’t banging his gavel, Chief Justice Sol Wachtler was having a Hallmark moment with his mistress.

But these weren’t your typical well wishes – these were vulgar, harassing, and volatile threats printed on the insides of seemingly harmless, animal-adorned greeting cards. And it all made for one nasty tabloid frenzy back in the 90s.

But we should back up.

Sol Wachtler was one of the most prominent men in America. Not only did he wear the hat of New York’s most important judicial figure, but he led the nation’s top state appeals court. And he wasn’t just another rube in a robe. He was a mensch with mega personality. And everybody loved him.

However, behind that winning smile and those baby blue eyes was a madman. A truth Joy Silverman knew all too well.

A sort of political socialite, Silverman had known Wachtler since her twenties – he’d helped her climb the ladder of success from coy heiress to a high-profile fundraiser for the republican party. Did we mention she’s also his wife’s step-cousin? Yep. But that didn’t stop the two from engaging in a love affair. A love affair that ended when Wachtler wouldn’t leave his wife.

Though it was over for Silverman, Wachtler was just getting started. As evidenced by the excerpt below from Linda Wolfe’s true crime book Double Life.

Read on for a taste of the vulgar threats and harassment Silverman – and her daughter – received from the man the world knew only as a standup guy.

Then download the book on Amazon, Barnes & Noble, and iTunes. 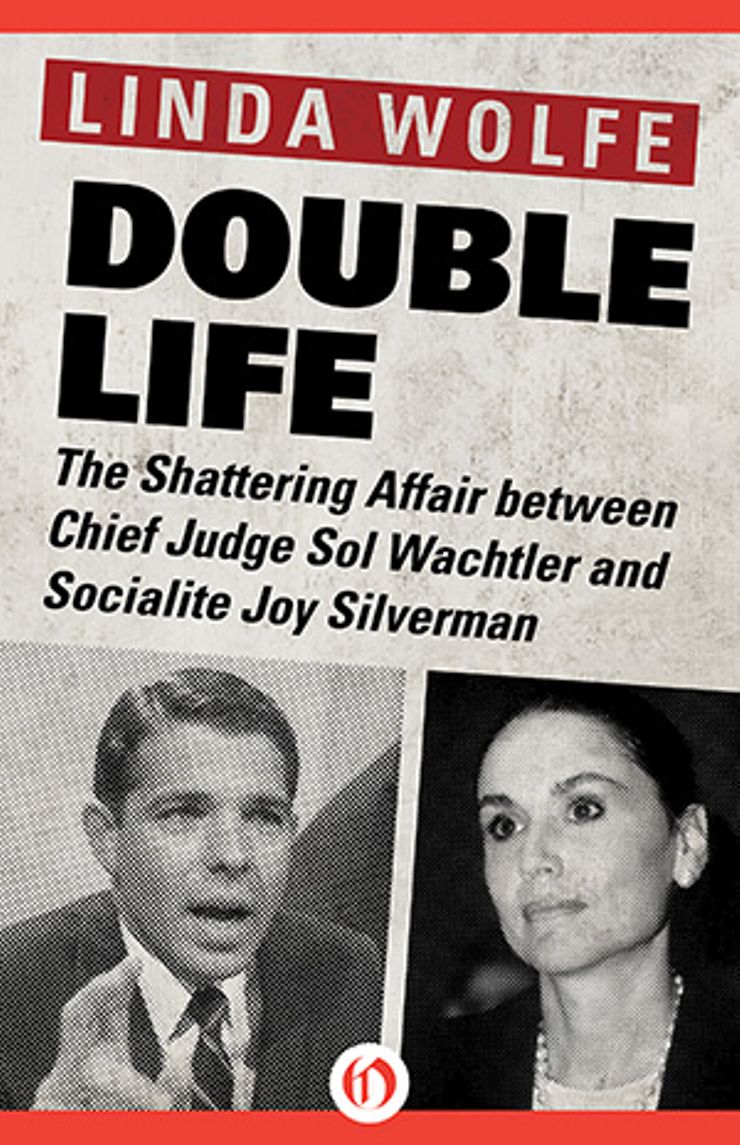 Joy was at home when, one morning in late April, she opened her mail to find a belated birthday greeting. It was a card whose front panel bore a picture of a bear and the words “On your birthday, CUCUMBERS are better than men.

When she turned to the inside of the card, she saw a long commercially printed message, all in capital letters:”

“THE AVERAGE CUCUMBER IS AT LEAST

HARD FOR A WEEK.—A CUCUMBER WON’T

—CUCUMBERS DON’T GET TOO EXCITED.”

ARE EASY TO PICK UP.—YOU CAN EAT

—A CUCUMBER DOESN’T CARE IF YOU’RE A

I THE BEST? HOW WAS IT?—NO MATTER

HOW OLD YOU ARE, YOU CAN ALWAYS GET

WON’T POUT IF YOU HAVE A HEADACHE.

—WITH A CUCUMBER YOU NEVER HAVE TO

WILL NEVER LEAVE YOU FOR ANOTHER

DON’T LEAVE YOU WONDERING FOR A MONTH.

—IT’S EASY TO DROP A CUCUMBER.

—NO MATTER HOW YOU SLICE IT, YOU CAN

HAVE YOUR CUKE AND EAT IT TOO!!!

The card was signed with a forgery of David Samson’s loopy signature and three big Xs, for kisses.

Joy was annoyed by the cucumber card. But her irritation must have been nothing compared to that which came over her when she opened another envelope that had come in the mail that same morning. This one was addressed to “Ms. Jesse Silverman”—her daughter Jessica?—and showed a buxom woman reaching into her refrigerator for a soda can. Inside were the words:

1. A DIET COLA IS SATISFYING ALL THE TIME.

2. YOU CAN DUMP A DIET COLA WHEN YOU’VE HAD ENOUGH.

4. IT’S AVAILABLE IN A VARIETY OF SIZES.

6. DIET COLA COMES IN A CAN, NOT IN YOUR MOUTH.

7. WHEN YOU SWALLOW A DIET COLA, YOU ONLY GET 1 CALORIE.

8. A DIET COLA DOESN’T DIRTY YOUR SHEETS OR DISHES.

9. A DIET COLA WILL SILENTLY AND PATIENTLY WAIT FOR YOU.

10. YOU CAN IGNORE A DIET COLA FOR DAYS AND IT WILL STILL BE THERE WHEN YOU WANT IT.

11. A DIET COLA RESPECTS YOU AS MUCH AT NIGHT AS IT DOES IN THE MORNING.

12. WHEN YOU SWALLOW A DIET COLA, IT DOESN’T LEAVE AN AFTERTASTE IN YOUR MOUTH.

16. YOU CAN HAVE A HEADACHE AND ENJOY IT.

This card, too, was signed with a replica of David Samson’s signature. But Joy was sure the cards weren’t from him. They were clearly from someone who had reason to want to annoy her, harass her.

Soon after he mailed the dirty cards, Sol went through Joy’s financial records and made a startling discovery. He learned that despite his always having viewed Joy as a spendthrift, she’d managed to save $150,000 out of the $300,000 a year she was receiving from Jeffrey and her trust. Maybe he ought to cut off her trust payments, he began thinking. Maybe he’d suggest as much to Norman Sheresky.

Early in May, he called the lawyer. Joy, he told him, would probably receive a greater maintenance award from the judge presiding over her divorce if she didn’t get any income from her trust.

The lawyer said he’d speak to Joy about the idea.

Joy turned it down. It smacked of harassment to her. Meanwhile, the harassment by mail was getting worse. Only last week, she’d received two even more disgusting cards. One showed a woman who appeared to have drunk something that had caused her eyes to roll and her head to expand hideously. “Under the circumstances, you seem to be handling things fairly well!!!” said the card’s printed message, and beneath it was a handwritten message, “But soon I’m going to fuck you over!!!”

Another card showed a bear falling down a mountain and said on its front panel, “Life is peaks and valleys,” and on its inside panel, “And the peaks are greased!”

Beneath that, the sender had penned in another of his own messages. “Especially for you, Bitch!” he had written.

Still, the most worrisome card had been addressed not to Joy but, once again, to her daughter, or at least to “Ms. Jesse “Silverman.”

On the outside was the picture of a fluffy kitten sniffing a flower. On the inside was a wrapped condom.

The card also contained a typewritten message. “I look forward to visiting you this summer,” the message said. “School should be great fun for you.

“BUT YOU MUST BE CAREFUL. The enclosed should be used by your boy friend before you do ‘IT.’”

It was signed with another replica of David Samson’s signature, and beneath the signature was an additional line. “P.S.,” the line read, “I have a picture of your mother doing ‘IT’ which I will send you soon.”

Though Joy had intercepted this perversion that seemed intended for her daughter, and didn’t let the girl see it, she was frightened by the new threatening cards. She made up her mind that the next time she spoke to Sol on the telephone, she would tape their conversation. And she also told Sheresky that under no circumstances would she follow Sol’s suggestions concerning her money. They couldn’t be trusted.

Sol didn’t let up on his plan to cut off Joy’s income from the trust. In mid-May, he again discussed it with Sheresky, and after their conversation, which had apparently left him dissatisfied, he wrote a preening letter to the lawyer that warned that under the terms of Bibbs’s will, he himself was the deciding voice in how the trust money was distributed. “You will note that I,” he said, “have the discretion to withhold income which, year after year, would become part of the principal. I also have the power to distribute principal whenever I wish.”

A week later, he wrote Sheresky another letter, this time telling him that he had presented Joy’s case as a hypothetical one to six other judges and that all the judges had agreed that his notion was a sound one:

The six judges said that they would award maintenance, based on the established standard of living enjoyed by the wife at the time the action was commenced, less the amount of income which she received from her trust.

The same six judges said that if the income from the trust was suspended, prior to the commencement of the action, and for whatever reason, the trust income would not be a factor in computing the amount of maintenance to be awarded.

Six to nothing, Norman. Think about it.

Joy, when she heard about the letter, was pretty sure Sol was using his role as trustee of her trust fund to intimidate her. It was a goal not so different from that of the dirty letter writer.