What Lies at the Bottom of Skeleton Lake?

High in the Himalayas is a mysterious lake with a very grisly secret...

Known by many as Skeleton Lake, Roopkund is a high-altitude Himalayan body of water that sits 16,499 feet above sea level in the northern state of Uttarakhand, India. Every time the snow melts and ice thaws, this shallow glacial pool reveals the ghastly origin of its nickname: A pile of human skeletons is at rest at the bottom.

Scattered around the rim of lake are even more bone remnants, as well as iron spearheads, rings, and leather slippers. In total, nearly 300 souls call Roopkund their final resting place. Eerier still: Research suggests that nearly all of these eternal residents died at the exact same time. 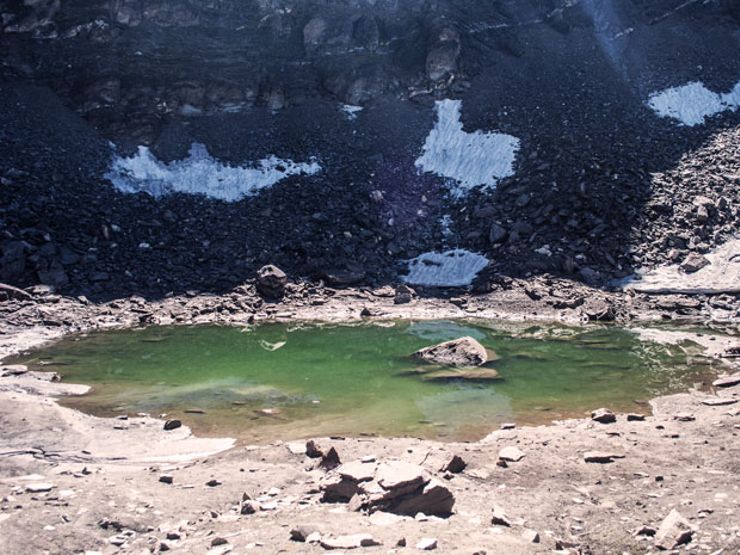 A forest ranger named H.K. Madhwal officially stumbled across the locale in 1942, though mentions of the lake and its grisly contents date back to the 19th century. The first person to climb the surrounding mountains and see the bones must have been terrified. Roopkund is awash with corpses, as if it were the site of a mysterious massacre.

Succeeding visitors were baffled by just what could have caused so much death at such a remote location. Local folklore told of a goddess furious at the defilement of her mountain sanctuary by disrespectful strangers. To retaliate, she rained down death upon the trespassers, flinging hailstones “as hard as iron” upon their heads.

For years, this explanation was dismissed as apocryphal. It would be decades before science ultimately proved this local legend was accurate. 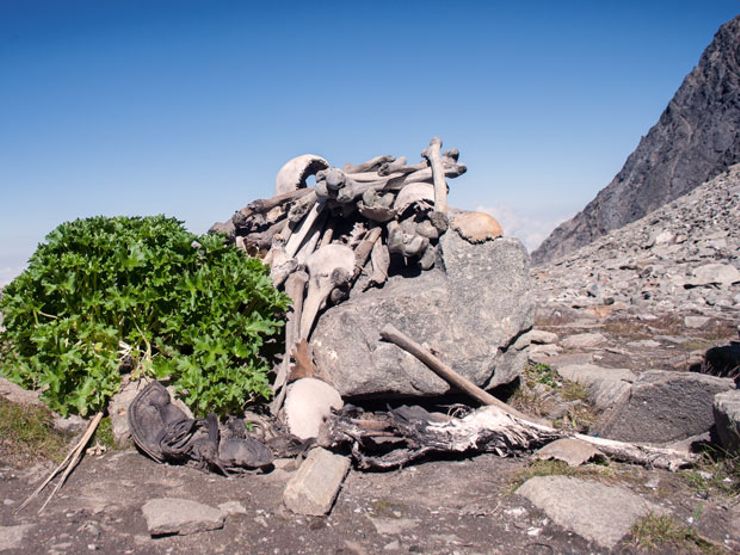 DNA tests conducted in 2004 suggest that the bones date back to about 840 AD … an astonishing 1,175 years ago. The testing also suggests that among the almost 300 human remains present at the lake, there are just two groupings of people: A small clan or family, and a group of porters and guides. The family’s DNA leads back to Iran, while members of the servant troupe seem to be local.

It’s hypothesized that perhaps the wealthy family was in search of new land or new opportunity. While historical documentation of this specific expedition is currently nonexistent, that area of the Himalayas is known for its ancient trade routes.

What shocked researchers, however, was the way in which this large group died: All from blows to the head that seemed to come from above. Yet the skull fractures didn’t point to sharpened weapons; instead, some sort of round, blunt object did the deed. This is where legend and science intertwine: Both believe that while traveling through the mountains, the group was caught by a sudden—and deadly—hailstorm. Stranded at the pass with no shelter in sight, the travelers were forced to stand and endure the blows of the flying ice chunks. Ultimately, nature prevailed. One by one, the skulls of the travelers were caved in by falling hail. 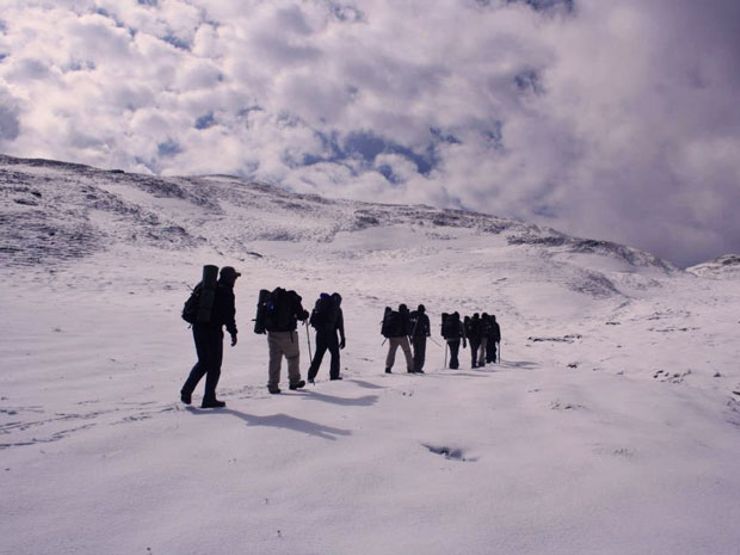 The deaths were followed by a long winter burial in the mountains, preserving the bodies in icy graves for nearly 1,200 years. Today, the alpine pool is a popular hiking destination for serious trekkers. Yet the bones at the bottom of Skeleton Lake serve as an ominous reminder to all those who visit: Respect the awesome power of Mother Nature.