Though its roots date back to the curiosity exhibitions of the mid-16th century, circus sideshows—or freak shows as they were then known—were wildly popular forms of entertainment in 19th and early 20th century England and America. These traveling performances embodied the dark and mysterious section of the circus, where entering a tent transported spectators to a world of oddities and marvels. Everyone is familiar with the lurid posters and extraordinary nicknames—but what about the stories of the performers themselves?

Here are the true-life stories behind some of the most legendary sideshow performers the world has ever seen.

1. Chang and Eng, The Siamese Twins 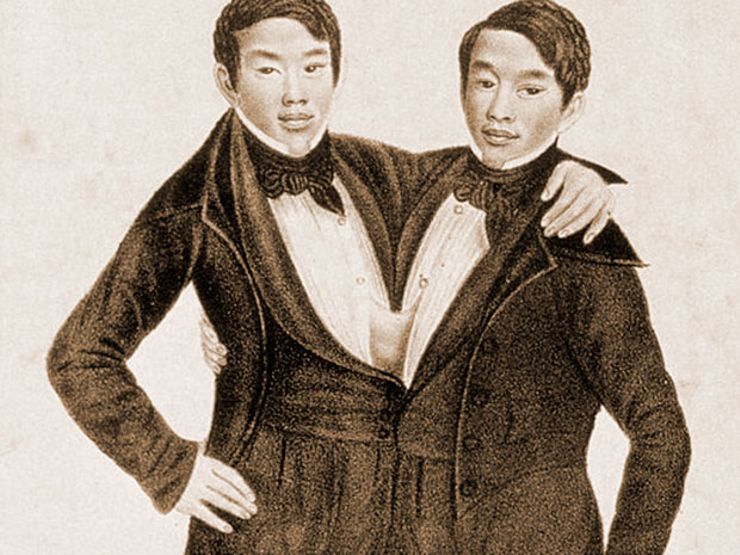 Born in Siam in 1811, conjoined twin brothers Chang and Eng represent the origin of the term “Siamese twins.” They were fused chest-to-chest by a bridge of cartilage at their sternums. Their livers were also connected. By 1829, the young men toured as curiosities with Robert Hunter. Soon, however, the brothers adopted the surname Bunker and went into business on their own. They made a North Carolina plantation their home and married sisters Adelaide and Sarah Anne Yates. All told, the two couples produced over 20 children. They required a custom marriage bed so all four could sleep together, although they eventually alternated between separate beds and houses.

On January 17, 1874, Chang died in the night from a stroke, and Eng passed three hours later. Their death casts and preserved shared liver are on display at the Mutter Museum in Philadelphia. 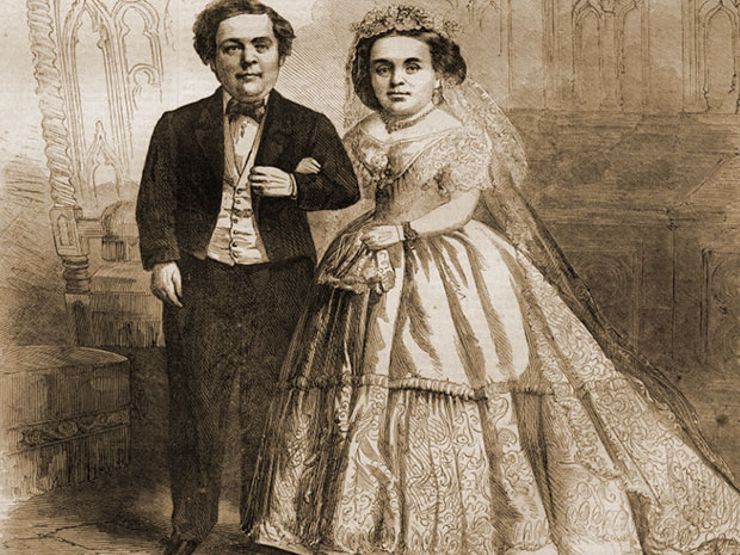 Born in 1838, Charles Sherwood Stratton was a relatively large newborn, weighing in at nine pounds. Then, at six months old, he simply stopped growing. By his fourth birthday, he had not grown in size or weight, standing just two feet tall and weighing approximately 15 pounds.

By age five, young Charles joined forces with his relative, P.T. Barnum, and soon became a sideshow performer known as General Tom Thumb. Together, they toured the United States with great success. When the pair traveled to Europe, performing for the likes of Queen Victoria, Stratton became an international celebrity. He experienced a second growth spurt in his teen years, and reached 2 feet 8.5 inches by his 18th birthday. His world-wide fame led to a lavish lifestyle—he even bailed out Barnum at one point. Stratton married fellow performer Lavinia Warren, afterward known as Mrs. Tom Thumb, and they received a White House reception with President Lincoln himself. Stratton died from a stroke in 1883 at the age of 45. The exact cause of his dwarfism baffled scientists, but he remains one of the most famous sideshow performers ever. 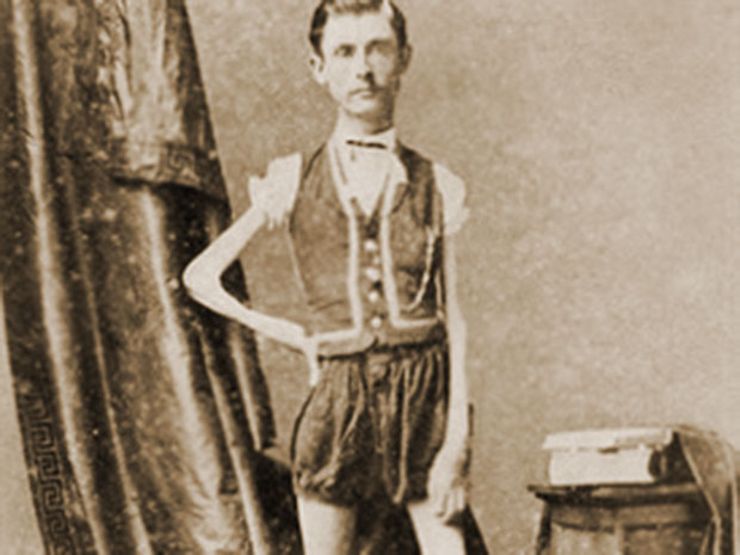 Human skeletons were fairly common in sideshows, but Isaac Sprague is considered the original. He was a healthy child from his birth in 1841 through his 12th birthday, at which point he began losing fat and muscle mass. Physicians were mystified by what they dubbed “extreme progressive muscular atrophy”. By his 20s, Sprague was having difficulty making a living, so he turned to the sideshow. In 1865, The Human Skeleton made his first appearance and was hired by P.T. Barnum to perform at the American Museum and on tours. Sprague used his earnings to feed his family and fuel his gambling habit. At 44, Sprague weighed less than 50 pounds. He died in Chicago two short years later due to his condition. 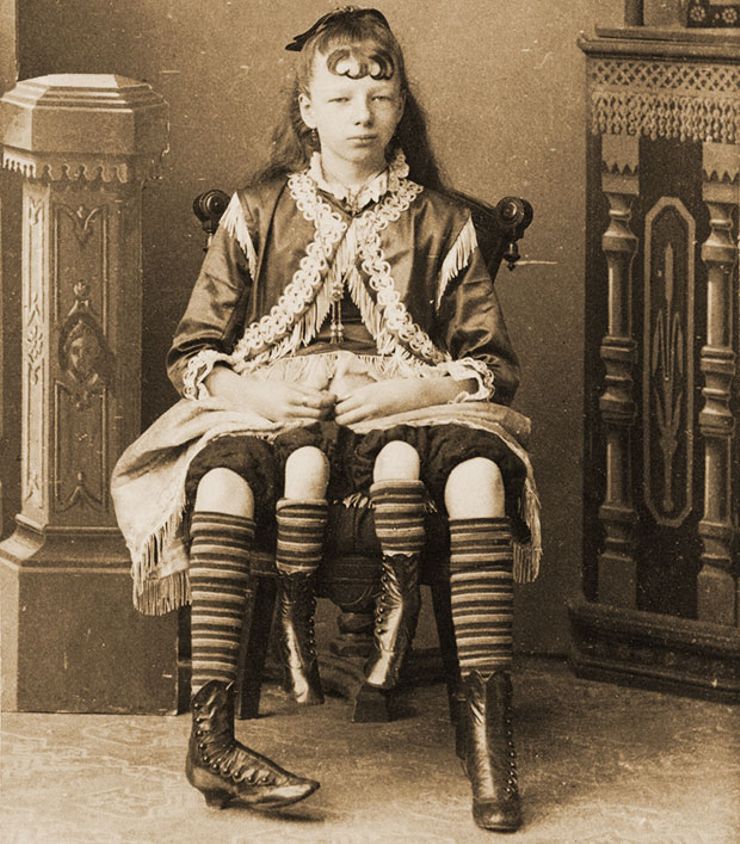 Originally billed as the Four-Legged Girl from Texas, Corbin’s body axis had divided during development. As a result, she had two fully developed pelvises with a second, smaller set of legs. Her sideshow career had started at one month old, when neighbors paid a dime to see the infant Myrtle. She began performing with Barnum at age 13. Corbin soon attracted throngs of spectators to her performances, and she worked for both Ringling Brothers and Coney Island. Her act became so popular that it spawned numerous imitators—many of whom simply faked their condition. By her late teens, Corbin was able to retire and marry James Clinton Bicknell, giving birth to four daughters and a son. Although she died in 1928, she is an important medical case study, as physicians discovered that both of her pelvises had fully functional sex organs. 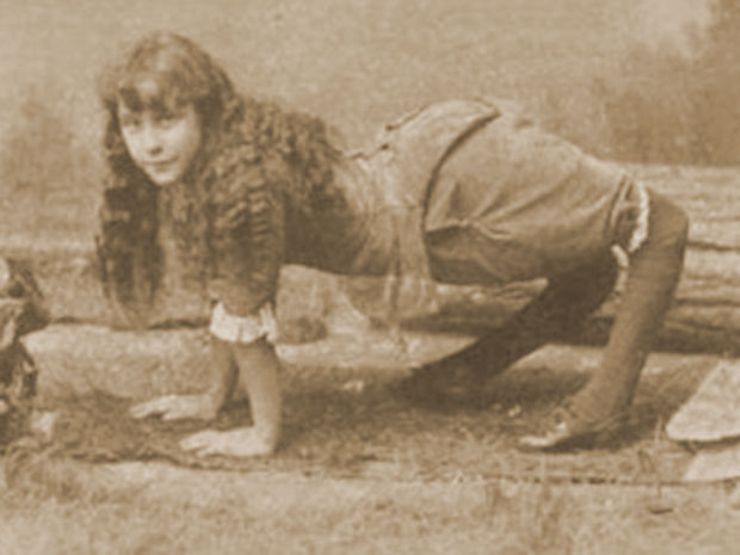 Ella Harper was born in Hendersonville, Tennessee in 1873 with a comparatively mild condition for a sideshow performer. She was able to bend her knees forward due to congenital genu recurvatum. The slight mutation meant that Ella could bend forward, drop down onto her hands, and walk on all four appendages like a camel. She found her way into the annals of sideshow history as a member of W.H. Harris’s Nickel Plate Circus in the late 1800s. As Harris’s star, Harper became extremely popular, but she clearly had other aspirations. At an 1886 show, her biography told of her plan to quit the circus and pursue education. Sure enough, there are no references to her after that last year in the spotlight. 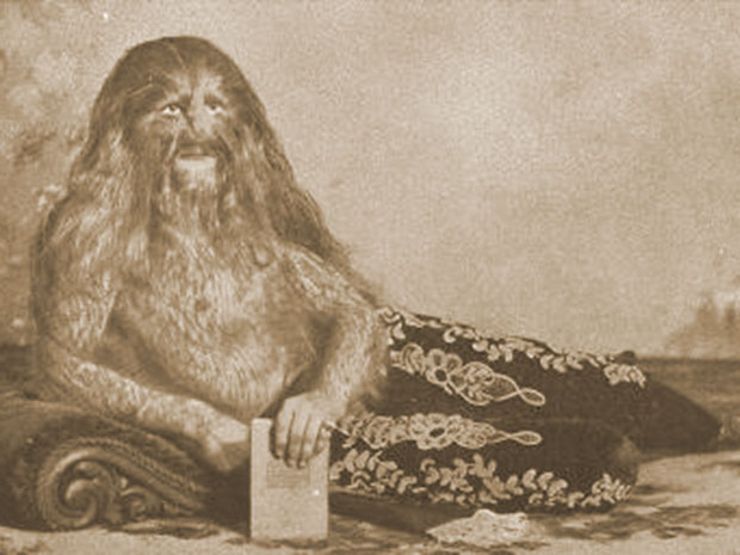 When Stephan Bibrowski was born in 1891, his Polish mother thought the child an abomination caused by her witnessing the child’s father’s death in the maw of a lion. In reality, he suffered from hypertrichosis, a condition of excessive hair growth across the body. At the age of four, his mother gave Stephan to a German entertainer named Sedlmayer, who began exhibiting the child around Europe as Lionel, the Lion-Faced Boy. Even at a young age, Bibrowski had eight inches of hair on his face and four inches all over his body except his palms and the soles of his feet. His performance consisted of speaking with his audience and performing gymnastics. He was renowned for his gregariousness, kindness, and intelligence, with knowledge of multiple languages. After performing with Barnum and Bailey and at Coney Island, Bibrowski retired to Germany in his late 20s and died there of a heart attack in 1932. 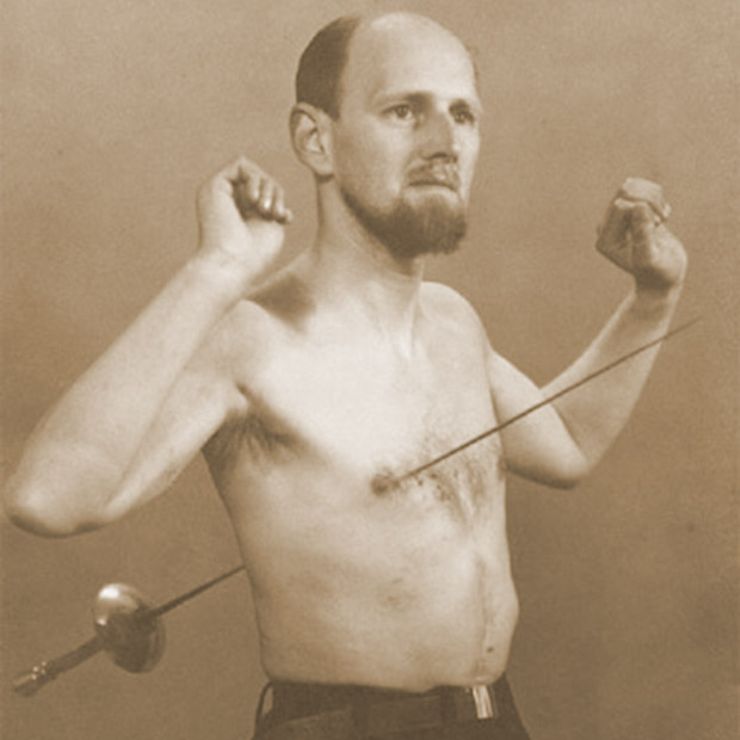 As a young man, Netherlands native Arnold Gerrit Henskes regularly had paranormal experiences. It was not until his 30s, however, that he decided his body was invulnerable. Henskes used his seeming superhuman ability to perform tricks for strangers at local pubs. From piercing his body with daggers to swallowing razor blades, the young man was practically made for the sideshow. He took on the pseudonym of Mirin Dajo based on the Esperanto word for wonder and became well-known for sticking swords straight through his body. Although he claimed to have learned his trade from Hindu fakirs, modern medicine shows that he most likely created fistulas or small scar tissue tunnels through which he could pass objects. After swallowing a steel needle in 1948 as part of a stunt, Henskes died from a resulting aortic rupture.

8. Schlitzie, The Last of the Aztecs 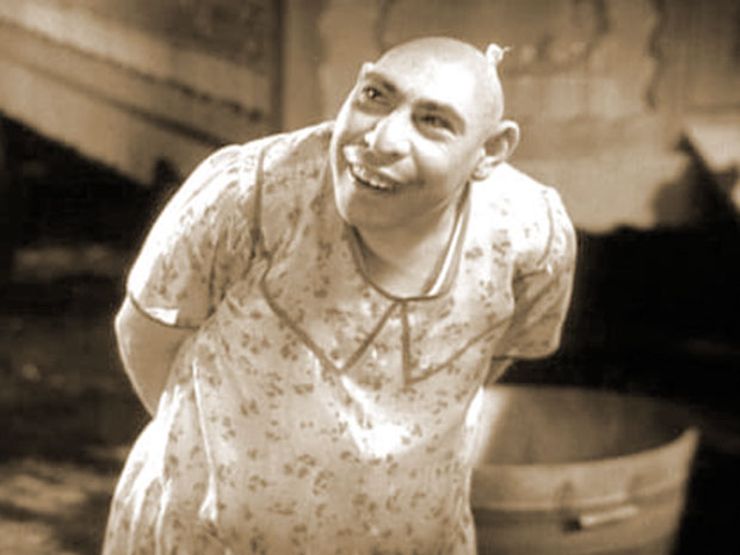 Still of Schlitzie from Freaks via Metro-Goldwyn-Mayer (MGM)

Pinheads were common in sideshows, but the most iconic is certainly Schlitze “Schlitzie” Surtees. Although he was billed as “The Last of the Aztecs,” this prominent performer likely called the Bronx home. He was born in 1901 with a developmental disorder called microcephaly that caused his short stature, small brain and skull, and severe mental disabilities. As such, Schlitzie could only speak in short phrases and struggled to perform everyday tasks. Yet, his clear talent made him a stand-out performer. At four feet tall, he performed as a female even though he identified as a male. Schlitzie’s popularity grew with his roles in the dramatic films The Sideshow (1928) and Freaks (1932). He passed away in 1971 at the ripe old age of 70, after his last performance three years prior. 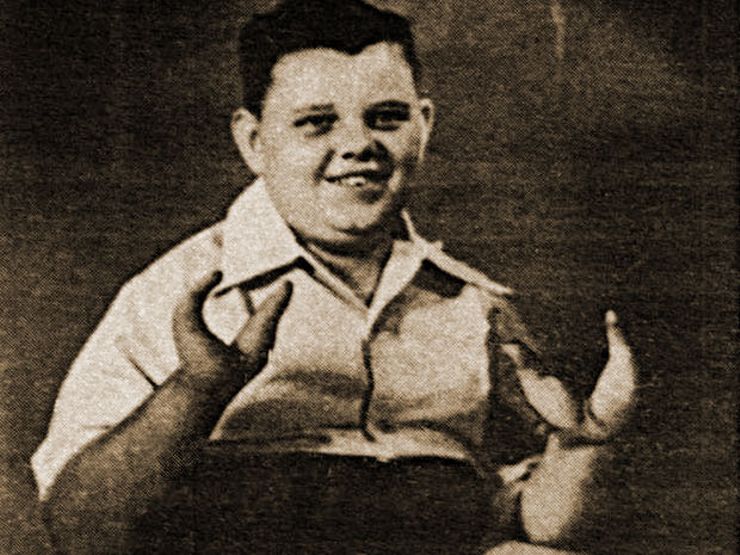 The Stiles family has a long history of ectrodactyly or hands and feet with fused fingers and toes. The most famous is Grady Franklin Stiles, Jr., who was born in 1932. Soon, the young Grady was thrust onto the sideshow stage by his performer father, with the stage name Lobster Boy. Grady married twice, had four children, and toured as the Lobster Family with two of his offspring who also had ectrodactyly. His private life, however, was marred by alcoholism and domestic abuse. In 1978, he killed his daughter’s fiancée the night before their wedding. Though convicted of the crime, Grady was sentenced to 15 years of probation due to his limited physical capacity. Grady gave up alcohol afterwards, but the troubles persisted. In 1992, after years of abuse, Grady’s wife and step-son hired a sideshow performer to murder Stiles. The hitman went through with the job, killing Grady in his Gibsontown, Florida home. He was buried in the local Gibsontown cemetery, where you can visit his grave today.

Related: The Murder of Lobster Boy 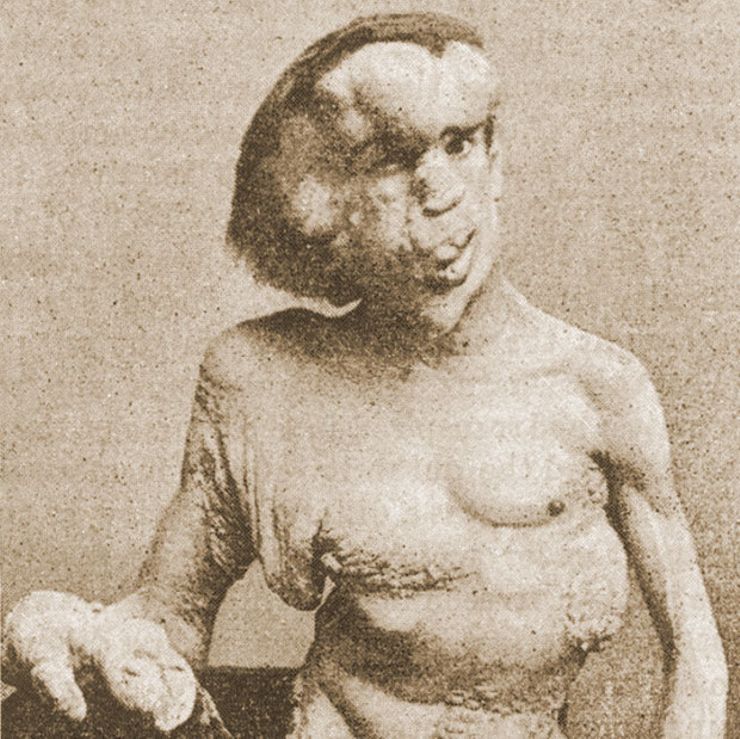 One of the most well-known sideshow performers ever was born in 1862 in Leicester with unclear genetic defects that caused abnormal skin and bone growth. At the age of 5, young Joseph’s skin began appearing lumpy, and his lips, feet, and one arm swelled. After a falling out with his family, Merrick spent years at the Union Workhouse before contacting showman Sam Torr about performing in freak shows. Soon enough, his new managers had dubbed him The Elephant Man and set the young man up in a shop across from the London Hospital. Merrick fast became friends with surgeon Frederick Treves, who would rescue the performer after his savings was stolen by a manager in Brussels. The afflicted young man was able to spend the rest of his life at the hospital, where London’s elite regularly visited him. He died on April 11 1890, after dislocating his neck while attempting to sleep lying down.

This story was first published on The Occult Museum.

5 Most Mysteriously Cursed Archaeological Discoveries Ever Made

Do you Think your House is Haunted? Take the Quiz and Find Out